Microcontrollers will have an important role to play in AIoT (AI + IoT) applications as they provide the lowest cost and power consumption. Performance is limited but we start seeing MCUs with AI accelerators such as GreenWaves GAP9 multi-core RISC-V microcontroller or Kendryte K210 RISC-V MCU with a KPU AI accelerator.

Another option is by Edgeless Semiconductor Co. Ltd (零边界集成电路有限公司) based in Zhuhai, China, and more specifically its Edgeless EAI-Series dual-core Arm Cortex-M4 microcontrollers equipped with a 300 GOPS CNN NPU.

The company does not appear to have a website, but I found the datasheet via a Banana Pi private group on Facebook as Banana Pi is currently designing an EAI80 development board. 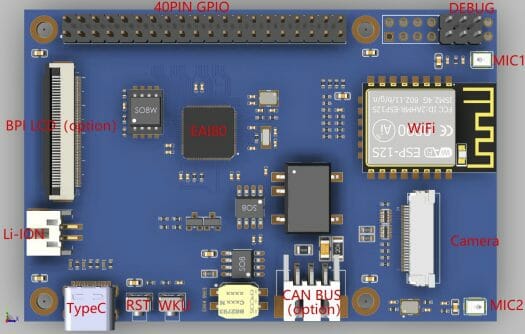 The board also includes an ESP8266 WiFI module, a 40-pin GPIO interface, connectors for LCD and cameras, two microphones, a USB-C port, a CAN bus header, and a battery header. This reminds me of Maixduino SBC, but except of being RISC-V-based, it is Arm-based and features an ESP8266 module instead of one with ESP32. Both connect to a camera & a display, and perform AI inference (computer vision/audio processing) on low-end hardware.

That’s all the information I have for now, and no details about the SDK has been leaked so far. It will likely take a little longer before such SoC and board become available.

I don’t understand, what does it refer to?

The chip is produced by Zero Boundary Integrated Circuit Co which is a subsidiary of Gree Electric Applicances . See this article https://www.pressreader.com/china/global-times/20180829/282106342505673

The article is from 2018. They may have changed name to Edgeless Semiconductors since then. But I got confirmation on Twitter that it’s indeed owned by GREE.

Edgeless is invested 100% by Chinese GREE , is the largest air conditioning maufacturer in China

It’s a double meaning joke 🙂
This advertising slogan means that Gree owns the key technology in the industry. But the word 核心 also can be translated as core.
Since they do have a subsidiary designing CPU core, now the slogan becomes a fact, despite that it’s quite doubtful whether Gree really is a leader in the industry.