Last week, and technically last year, we wrote Dragonbox Pyra open-source hardware handheld Linux PC was ready to ship after 6 years in the making, and 4 years after initial pre-orders, highlighting that such projects can take a long time.

But it’s not the only project to have suffered from long delays, but still slowly getting things done. Rhombus Tech started working on earth-friendly EOMA68 (Embedded Open Modular Architecture Standard) computing cards based on the 68-pin PCMCIA form factor in 2012, before launching Allwinner A20 based EOMA68 cards on Crowd Supply in 2016 together with laptop and micro PC shells. 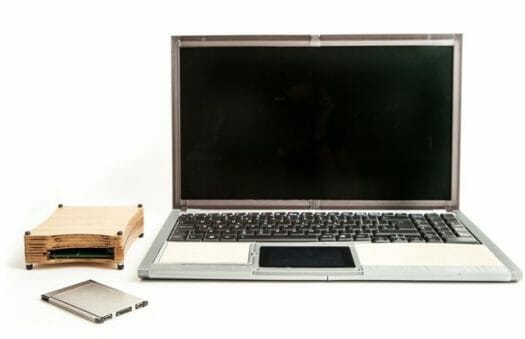 The project had regular updates over the year, mostly to discuss the progress of the project, and unexpected challenges encountered. But there may light in the tunnel,  as in the latest December 30th update, Luke Kenneth Casson Leighton (LKCL) announced the company had managed to manufacture 100 OEMA68 cards based on Allwinner A20 dual-core Cortex-A7 processor with the help of partners like ThinkPenguin.

The project managed to get 1,000 backers during the crowdfunding campaign, and those first 100 cards were mostly done for testing purposes to make sure everything works as expected. This is still progress, and there’s no ETA exactly when backers will get their cards, but at least that’s progress, and hopefully, backers will get their cards and optional the shell they paid for soon.

EOMA68 cards were mostly designed to fight against excessive e-waste and planned obsolescence since the cards can be updated or placed while the shell (micro desktop or laptop) remains the same.   It’s easier in theory than in practice, as ports also evolve (think USB 3.0 vs USB 2.0, 2.5Gbps vs Gigabit Ethernet), so shells also become obsolete, but it usually takes a longer time to happen.

Luke also noted there’s consumer demand for modular, self-serviceable hardware with the initial success of/excitement over Phonebloks (900,000 supporters), and the Intel Compute Card that Nexdock planned to use in their latest laptop shell. Both project eventually failed. Phonebloks ended up part of Motorola/Google Project Ara that folded a few years later, and the Nexdock project apparently failed because of a “failure to cope with the DRM built into Intel Compute Cards”.

Luke hopes the delivery of the first EOMA68 A20 cards will start the journey to bring mass-volume, inexpensive, carbon-conscious eco-computing to the world. The standard may need to evolve over time for different types of cards (entry-level, mid-range, high-end), as the interfaces offered in the current standard may not suit all modern requirements. Only time will tell.

Nearly forgot about this project, I used to be so enthusiastic about it about a decade ago, well now that seems slightly obsolete, as one can also see from the original pinebook upgrades. Most likely not coming due to thermal problems…

I threw away all of my Allwinner A10/20/33 based devices years ago.
They never ran well with Linux anyway.
This card is brand new trash.

Isn’t it a little bit harsh? Of course they’re almost a decade old but they’re still supported pretty good. No comment about the performance though.

Well now they are running well on mainline…

Look, we found something in the history!

The original. Pc did it with isa, vlc and PCI slots coupled with CPU socket.

The upgraded CPU for older out of date sockets never worked well.

While the project is respectable, it looks totally outdated. A20 is basically dead (too slow and too hot for anything interacting with a user). And PCMCIA is antique. However trying to achieve the same using more modern chips (phone chips maybe?) and cardexpress (pcie connection) could possibly still make sense. Let’s just hope the author doesn’t discourage after seeing the lack of interest for this too old model.

It’s not an actual PCMCIA card, that would way way sillier than the A20 board This is a low-spec system-on-module that uses the mechanical PCMCIA slot. While the A20 in this year is clearly outdated as you say, my understanding was that they always planned for this to be a family of machines with interchangeable SoMs. If they made a second module based on something like an S905X3, RK3568 or even MT8195, they could have something usable, while being able to bootstrap an ecosystem of upgradable machines based around the first SoM. The question is whether they can pull off… Read more »

> This is a low-spec system-on-module that uses the mechanical PCMCIA slot Of course but my understanding is that it remains limited to the signals that were routable on such connectors by then. Oh I just found the pinout here: https://elinux.org/Embedded_Open_Modular_Architecture/EOMA68/Hardware and apparently they extended it to optionally support USB3. But the rest is i2c/gpio and 18-bit LCD. I think it was a great idea when initially specified, but I’m not sure it follows the evolutions that users expect to at least have a laptop running on such a board. I could imagine this being very convenient for a variety… Read more »

Maybe suitable for those humans who do all their work in an ‘operating system’ called EMACS (those do exist, I know one personally).

I seem to remember seeing a con presentation about this from a year or so ago where the main guy was using every excuse under the sun why it was everyone else’s fault it was delayed.. apparently some bad blood with linux-sunxi too?

I think this might be a case of a fun little project going a bit too far where even the main guy is sick of it but the sunk costs are so high it’s too late just to give it up.

Not excuses, just reasons & realities. Many don’t realize how many challenges, or how big.
“Main” guy may be hampered by pandemic and distracted by other larger project(s), but
manufacturing guy/group is doing a heroic job.

Pretty sure the presentation I watched was pre-pandemic so I don’t think that’s an excuse.

If they’ve finally managed to make some of these things then that’s nice but it’s taken so long that the hardware is obsolete.

(In other news, I’m not sure how the downvote function helps building a positive comment community here.)

Downvotes are essentially used on RPi articles (or occasionally RPi comments). Mine has great changes of being downvoted by the very same persons who either don’t like that we have an opinion on their preferred board, or those who hate these boards. Funny sometimes 🙂

OK, let’s try this again. Meanwhile Intel has released the NUC Compute Elements. Skip the first five in the list, what’s relevant here starts from the sixth item down the list: