NexDock first launched a 14″ laptop dock for smartphones, tablets, and development boards via a Indiegogo campaign in 2016, where they successfully raised over $350,000, and delivered rewards to backers last September and October. With the recent introduction of the Intel Compute Card, the company has now decided to work on a new NexDock that will take Intel’s cards. 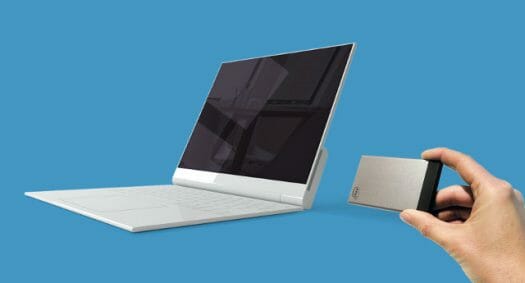 We don’t have much details right now, but the company said that beside the Intel Compute Card, it will come support interchangeable USB type-C modules, and will still support Windows 10 smartphones with continuum feature, Raspberry Pi and other devices that can be connected through a USB-C port. The second drawing also suggests the keyboard will be detachable, and you’ll be able to use NexDock as a Windows tablet.

It could be nice to have an Intel laptop with Linux or Windows, and an ARM tablet with Android, but this won’t be possible, since Intel Compute Card are unlikely to be fitted with ARM processors.

Nevertheless, it’s an interesting development, as Intel appeared to target smart devices and business applications for their Compute Card when the announced it as CES 2017, but if the NexDock becomes reality, we will also find it in consumer devices, possibly around mid-2017 when the new NexDock is supposed to launch.

Is the compute card physical and electrical design sufficiently well documented so that a third party could make Arm-based compute cards running Android?

@Paul Mansfield
I don’t think Intel has released any specs so far. It requires PCIe, USB 3.0,and DisplayPort, so it could possibly work for some higher-end ARM processors, not including the processors used in premium phones.

I agree with Paul Mansfield, I’d much rather see an ARM chip in one of those modules.

I love the idea of having a replacable ‘core’ to my laptop. In my useage, the processor is the part that gets dated faster than the hardware. I appreciate that not everyone’s use patterns are the same as that.

I think they’re using thunderbolt over a USB-C connector, and also Displayport video over the same, so third party cards should be possible.

@Paul Mansfield
Quoting Jean-Luc’s post about the Compute Card: A ‘new standard connector: […] USB-C plus extension connector will provide USB, PCIe, HDMI, DP and additional signals between the card and the device’ (the latter most probably addressing connection of the WiFi inside the Compute Card to antennas in the enclosure).