Amlogic S905X4 is a quad-core Cortex-A55 SoC for 4K TV boxes and set-top boxes with H.265, H.264, VP9, and AV1 hardware video decoding. The silicon vendor usually provides a lower cost version of the processor for dongles without Ethernet, but keeping most of the same features, as we’ve seen in the past with S905X2 and S905Y2 processors for instance.

S905X4 has now its own cost-down version with S905Y4 for Android TV (certified) dongles relying on WiFi for connectivity, but instead of keeping Cortex-A55 cores, the processor features four low-power Cortex-A35 cores. We do not have the full details about S905Y4 processor just yet, but it has start to show in dongles from SEI Robotics and SDMC that appears idendical. 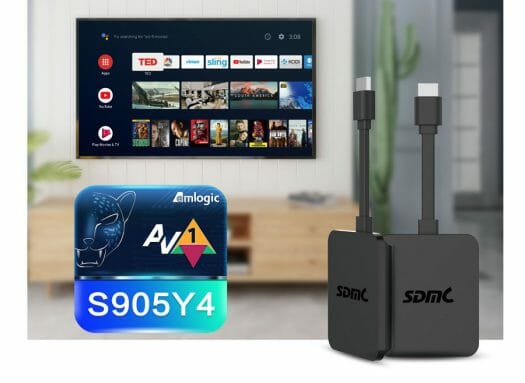 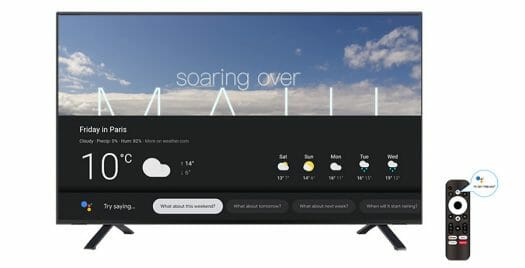 The dongle runs a certified version of Android 10 for Android TV or greater, and by default ships with a power adapter, a Bluetooth and IR remote control with voice support plus two accompanying AAA batteries and a user manual.  SEI Robotics and SDMC dongles are not meant for end users but instead TV operator that would typically prefer using a custom launcher to promote their services rather the stock Android TV launcher.

You’ll find conflicted information about the Arm core used in S905Y4, but an AndroidTV_rumor tweet seems to confirm S905Y4 is indeed based on four Cortex-A35 cores using information from the Google Play Console. Cortex-A35 core should be more efficient, but a fairly slower than the Cortex-A55 core used in S905X4, as it is an evolution of the Cortex-A7 32-bit core with 6 to 40% improvement in efficiency.

However, If the 2.6 GHz frequency reported above is correct then a quad-core Cortex-A35 @ 2.6 GHz may perform just as well, if not better, than a quad-core Cortex-A55 @ the typical 1.9 GHz used with S905X4, but that seems really high for this type of core. Strangely, S905X4 is also shown as running up to 2600 MHz on the screenshot above, so go figure.

Additional information about the Android TV dongle may be found on SDMC and SEI Robotics websites.

Let’s hope that becomes available for end users soon, looks like a perfect match to just enable iptv on an old smart tv and to give android on a webos tv

$30 Amazon 4K FireTV stick does AV1. I use it to watch YouTubeTV. FireOS is Android inside.

Absolutely 100% false. No version of Fire TV stick/box/cube has AV1 hardware decode support. If AV1 is being used, it is software decoding.

It could be software AV1 no way for me to tell. Turn on the Fire developer support and you can see the codec in use. My YouTubeTV app reports AV1 in use.

— I did some Googling, the chip in the 4K stick is a MT8695 which has hardware VP8 and VP9 support. I wonder Google is able to use some of the hardware primitives from VP9 to do partial AV1 hardware support. This is all closed source, how it works is just speculation.

I doubt it. YouTube encodes videos in multiple resolutions and codecs and picks one to stream to you based on what your system supports. H.264 or even MPEG-4 Part 2 is still used on older systems, along with VP8/VP9. On a desktop environment you can right click the video and look at “Stats for Nerds” to find the video and audio codec along with other information. Someone on Reddit says you can bring it up on 4K Fire Stick by doing the following: Press and hold the center button. Wait a second and while holding center, press and hold the… Read more »

That’s what I did for YouTubeTV. It says the codec is AV1. YouTube says h.264 on most things.

This may also explain why my YouTubeTV hangs once a day requiring a reboot and my YouTube never hangs.

I have no info on this other than what is in the Amazon nerds overlay that reports things like codec, resolution, bandwidth, etc. It is all closed source and I am not an Amazon employee.

There is another possibility, I will check next time I turn my projector on. The font used in the nerd display is microscopically small. Maybe it says AVC instead of AV1 and I can’t tell the difference between the C and 1.

Jon, I think you’ll find that it says “AVC1” or similar. That’s how YouTube denotes H.264/AVC. AV1 decoding is extremely unlikely to be enabled on the Fire 4K Stick (which I own as well), since it would require a software decoder, and I don’t think they’d install such software at this stage, and it might be too taxing on the CPU.

Rumor…. Google is working on lib for AV1-software decoding to be added in Android11 update for 2020 Chromecast.

The seirobotic website specs, clearly say it is, Quad A55 @ 1.9GHz.

Yes, but I think they are wrong, because two others sources say quad A35.

Then if we cannot trust the source of product information?

We’ll see. Maybe SDMC and Google are both wrong, and SEI Robotics turns out to be right.

SEI Robotics guys have corrected their product page and it now shows Cortex-A35.

Well, I decided to ask whether the 2000 MHz for S905Y4 are really confirmed or just the usual Amlogic cheating but I expect no answer from Khadas anyway (also as usual 🙂 )

Khadas Edge2 and VIM1S are on the way. So I should soon be able to check it out, although I might outsource the VIM1S part.

As long as you get the person to execute ‘sbc-bench’ to measure clockspeeds and confirm S4 family also being stuck on a 5.4.125 BSP kernel and ‘sbc-bench -G’ to create at least one set of Geekbench scores in a proper way… 🙂