Arrow DECA evaluation board, featuring Altera’s MAX 10 FPGA and Enpirion power solutions, was launched in March 2015 and sold for around $169 at the time.

Time has passed with Intel purchasing Altera FPGA business later that year, and the price of the board dropped to $65 as listed on Intel website. But now Arrow is offered the DECA FPGA for just $37, and you can also get fast free shipping if you’re a member of ArrowPerks loyalty program. 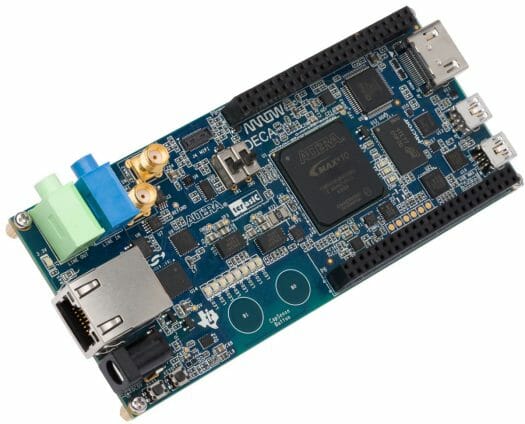 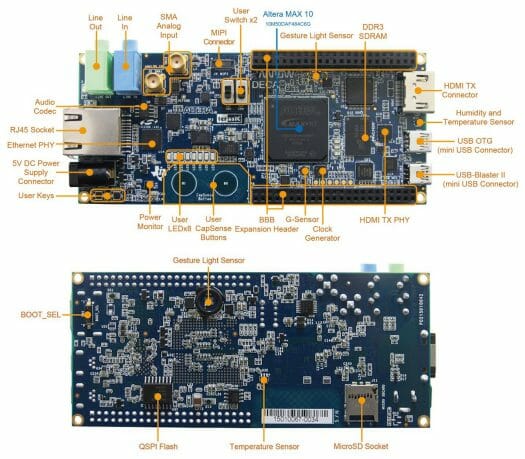 The kit includes the DECA development board, a Quick Start Guide, an Ethernet cable, two USB cables for USB control and FPGA programming and control, as well as a 5V DC power adapter. The board initially required a PC running Windows 7 or greater with  at least 4GB RAM, an Intel Core i3 processor, and around 20GB of free hard disk space to run Quartus II IDE, but now there’s also (pre-release) Linux support via the Linux for DECA project.

You’ll find schematics, BoM, user manual, and several online workshops on Intel community website to get started with the board and FPGA in general.

Thanks to fhersete for the tip.

Are you  a member of ArrowPerks loyalty program? You can easily register for free.
I ordered yesterday a board with free shipping to Belgium.

nice board for the money, but seems it only ships from the us, so it will be more customs tax than the item costs.

According to their website, they are taking care of the duties and taxes (DDP, Delivered duty paid). I guess like Digikey. They ship everything from the US, but I never had to pay any duties or taxes.