Their latest product is UniPi Gate G100/G110 Linux IoT gateway with Ethernet and RS485 interfaces. When the company contacted CNX Software about the gateway, they told us the system was based on a quad-core Cortex-A53 processor clocked at 600 MHz. Since we are not aware of such SoC, we asked, and UniPi told us it was Rockchip RK3328. That processor is normally clocked at 1.5 GHz, and it turns out the company purposely underclocked the processor to 600 MHz to extend the temperature range and reduce the heat emitted by the CPU. 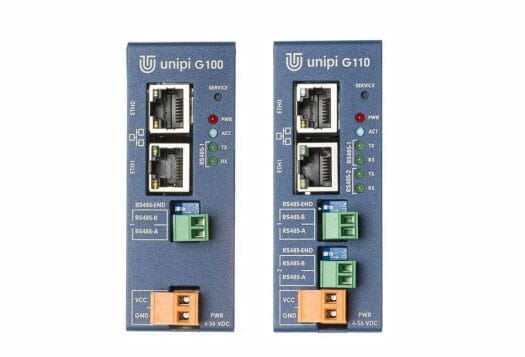 Unipi Gate G100/G110 Linux IoT gateway and logic controller is designed for industrial automation, building management systems and other automation projects, and for instance, can be used as a data logger in SCADA or MES control systems, or in cloud services within Smart City, Smart Factory and IoT/IIoT projects.

Unipi Gate runs Debian Linux based OS, and by default the gateway ships with Node RED preinstalled, but you could also order it with the a minimal image and install your preferred framework including Hone Assistant, Codesys, Domoticz, openHAB, and others, as well as UniPi’s own Mervis software.

UniPi Gate G100 and G110 gateways are available now starting at around 200 Euros including 20% VAT. More details can be found in the product page and announcement post.

Is it possible that this design saves the PMIC so the CPU cores are all the time fed with 975mV?

The reason can be stability. The main thing for this kind of gates is to run 24/7.

I wonder if putting so much (NodeRed etc) into the gateway is the right thing to do here.
IMHO you want the gateway to be dumb as a brick and have all of the stuff you need to constantly patch on a machine you don’t might rebooting all the time.

This isn’t Windows, so why would updating/patching require a reboot?

Well, there are kernel updates that usually require a reboot (unless you can make use of kernel live patching) and within the last 400 days the following packages also required a reboot for changes to take effect on a bunch of Linux machines: dbus, libc6, libssl1.0.0, libssl1.1 and zfs-dkms

>This isn’t Windows, so why would updating/patching require a reboot? Since this thing is Debian based I guess it’s using apt so this doesn’t totally apply but with many embedded Linux thingies like this you do upgrades with two copies of everything so if the new version doesn’t work you can easily go back to the original. So you are booted into the A version, you update the B version and then rebooting into B leaving A as a fall back or to get overwritten by the next update. But it doesn’t have to be a complete reboot to be… Read more »