Ubuntu Core 20 is said to come with all benefits from Ubuntu 20.04 LTS such as regular, automated updates, the ability to manage custom app stores, and offers a longer 10-year support window. 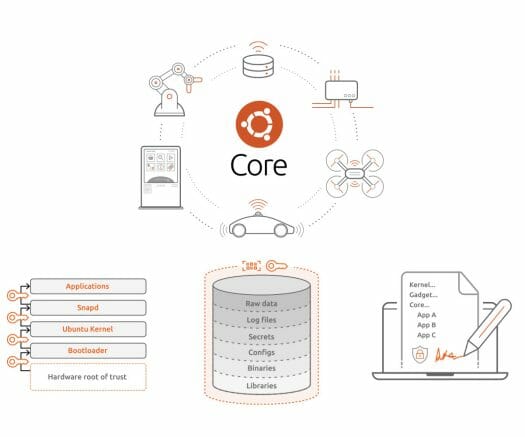 Ubuntu Core is available and certified on popular32-bit and 64-bit x86 and Arm single board computers such as Intel NUC or Raspberry Pi 4. Minimum requirements include a single-core processor @ 500 MHz, 256MB RAM, and 512MB storage. Alternatively, it’s also possible to run it in a virtual machine on your PC.

Security is further enhanced with apps running in containers, and since only the necessary software components are installed, it can minimize the attack surface for OS and apps, and reduce the size and frequency of software updates.

The company also offers SMART START service to reduce the risk of launching IoT products based on Ubuntu Core 20, where customers can pay a fixed $20,000 and up fee to cover the consulting, engineering, and updates for the first 1000 devices on certified hardware for sensitive consumer, industrial, healthcare, or smart city applications.

Canonical says tens of thousands of industrial and consumer IoT devices run Ubuntu Core from companies such as Bosch Rexroth, DELL, ABB, Rigado, Plus One Robotics, Jabil, and others.

More details about Ubuntu Core 20 can be found on the product page and announcement, and the company is also organizing a webinar scheduled to take place on Wednesday 24 February 2021.