Guy Dupont got a bunch of 2004, fourth-generation iPod Classic MP3 players from his mother-in-law, and instead of playing MP3 files on the media players, he decided to repurpose one with a Raspberry Pi Zero W to be able to stream music from Spotify over WiFi.

The resulting project is called sPot (ess-pot), and looks just like an original iPod, but it’s a Linux device that can stream/search via Spotify with a UI written in Python and based on the original iPod experience. But apart from the enclosure, and the original “click wheel” there’s not much left from the original design. 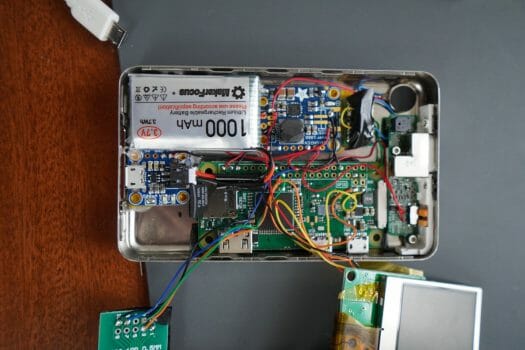 Besides the Raspberry Pi Zero W SBC and iPod enclosure, the sPod includesAdafruit Mini LiPoly/LiIon USB Charger and PowerBoost 1000 Basic boards for charging and power management,  a 1,000mah,3.7V rechargeable li-ion battery, vibration motor discs For haptic feedback, a 2-inch Adafruit TFT display, and a few other components, wires, and cables which you can find the project’s page on Hackaday.io. There’s also a 32GB microSD card for Raspberry Pi OS Lite.

On the software side, the portable audio streaming player runs Raspotify daemon to stream music from Spotify, the Spotipy Python library for authentication and the search function, while the UI is a Python program that relies on tkinter, and there’s also a C program to control the click’s wheel over serial both of which will soon be available on Github. Other programs used for the project include Redis to cache user’s Spotify data, Openbox to host and automatically the UI Application, as well as pi-btaudio for Bluetooth audio support.

I might try to use the software and UI on a display, and switch between the Pi Zero W music player and Pi 4.