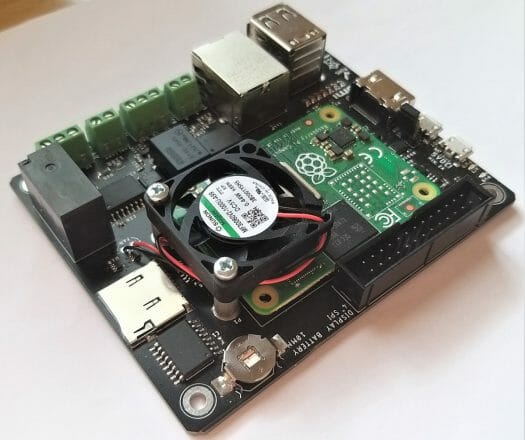 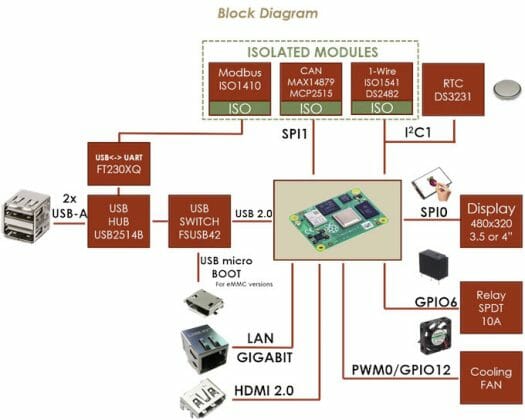 Usually, it’s a bad idea to power a Raspberry Pi CM4 system via a 5V/2A USB adapter, but considering this board does not expose USB 3.0 or PCIe interfaces, and the load on the processor should be fairly low for this type of application, it may not be an issue.

The project will be open-source hardware with  Eagle Schematic and PCB design files,  custom libraries, BOM, part numbers, and custom Raspbian Image with all Python libraries and instructions released once the crowdfunding campaign is over.

The Raspbian (Raspberry Pi OS) image comes with the FBCP driver for the display, and a demo user interface based on Python 3.7, PySide2 5.12, and QML 5.12 to showcase and control the Modbus, CAN, 1-Wire interfaces respectively using python-can, modbus_tk, and Pyownet open-source libraries, as well as the RTC and the relay.

CM Hunter has just launched on Kickstarter with a 13,000 Euros funding target, or around $15,700 US. A pledge of $120 is asked for the carrier board without module, nor display. This includes free untracked shipping, but backers may want to add 7 Euros to add tracking for peace of mind. There’s no bundle with module, display, power supply, so all those would have to be purchased separately. The display is made by Waveshare, and you’ll find it on Amazon or Aliexpress for just under $30. Delivery is expected for June 2021.

I value and respect everybody’s works, choices and preferences as well. However I name raspberry pi boards as “Microsoft Tool” after pushing microsoft repos without any announcements with recent Raspberry Os update. For me there is no any Raspberry Pi. Just a memory.