Since the Raspberry Pi Compute Module 4 launch last fall, we’ve seen several interesting carrier boards for the system-on-module including Wiretrustee to build a NAS with up to four SATA drives, the compact, Arduino-sized Piunora board that also include an M.2 socket, or Over:Board mini-ITX carrier board. 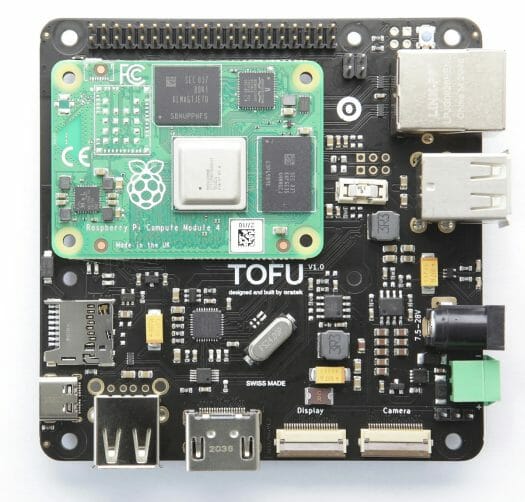 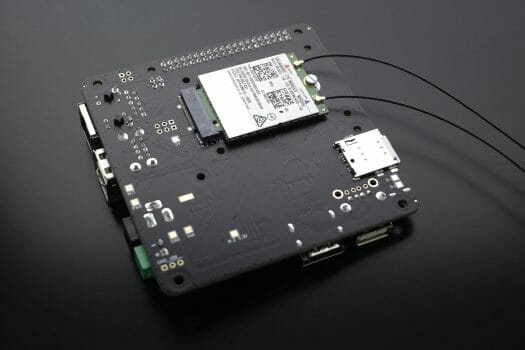 The board is designed to work with a CM4 module running Raspberry Pi OS with minimal changes to config.txt and the enablement of nvme-coremodule in the OS as explained in the Wiki that also includes mechanical files and PDF schematics. 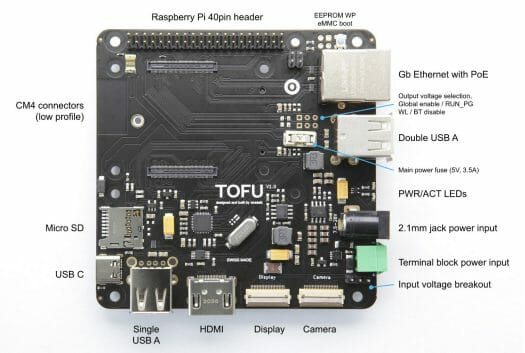 Oratek TOFU can be pre-ordered on the company’s online store for 99 CHF or $109.33 including taxes. Shipping is expected to start in mid-March. You’ll still need to purchase Raspberry Pi Compute Module 4 separately in a configuration that meets your needs. The company can also customize the board, i.e. remove unneeded connectors and/or chips, for orders of more than 200 units.

Via Tom’s hardware and LinuxGizmos

There are countless other CM4 carrier boards available in the meantime. Jeff Geerling started with an Github issue in his raspberry-pi-pcie-devices repository that ended up here: https://pipci.jeffgeerling.com/boards_cm

Why not two M.2 slots? Routing the USB2 signals to the 2242 slot for those wireless cards and the PCIe lane to a separate 2280 key M slot.

Key B, 2242 and NVMe is such a weird combination. Only a few rather expensive or crappy SSDs with key B-M coding will fit while key M combined with 2280 will allow for hundreds of SSDs…

8 cm on 9 cm board? Possible unless there routing or layout issues. In which case make the board a bit larger. Squandering the M.2 on the cell module that needs USB is bad move too.

The photo shows a 42mm component. At almost double that length, it would be tight.

A smaller module seems like a reasonable compromise – you’ve identified a niche for a 12x12cm Nano-ITX carrier board! 🙂

The board would certainly have ample room to accommodate two M.2 slots side by side, as tkaiser suggested.

Those guys missed an opportunity to create a real nice board using 2 M.2. one for USB cell nodule and one for 2280 SSD. Hardly any more cost. They could have offered low cost models with one or both M.2 connectors not populated to save a few bucks. Maybe some 0 ohm resistors near compute module so there aren’t unterminated long traces if required.

One other consideration is that you’d need to add a PCIe switch if you wanted to have more than one slot. That does add to the BoM and also adds more to the complexity of the board layout. Not impossible to do in such a small board, but it would probably be difficult and jack up the price a bit more.

There are a couple ITX and micro-ATX designs that look promising, though, which do incorporate PCIe switches and have multiple M.2 slots (and/or multiple PCI express slots), and I’m watching them all with interest!