Smart Events is where artificial intelligence/machine learning is leveraged in the camera. We have eight different smart events. Let’s go through all of them. 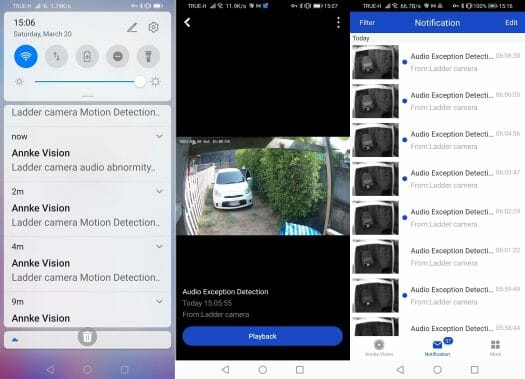 The next day, I  noticed many Audio Exception Detection alerts around 6 am. It turns out that’s about the time birds wake up and start chirping non-stop. Not very useful, but I’ve found out the neighbors’ dogs could make good audio sensors to detect incoming intruders. The demo below shows both day and night time recordings with dogs barking, then birds chirping.

Next up is Face detection. 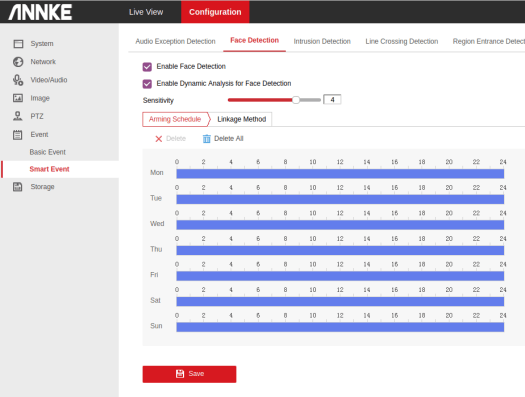 Face detection does work as shown in the screenshot below, but I had to remove the cap on my head for detection to work.

You’d also need to make sure Face Detection is enabled in an area where people typically stop, as it does not work while walking or running, nor does it work when wearing a face mask.

Motion detection is bringing a lot of noise to our notifications so let’s disable it before moving to intrusion detection. 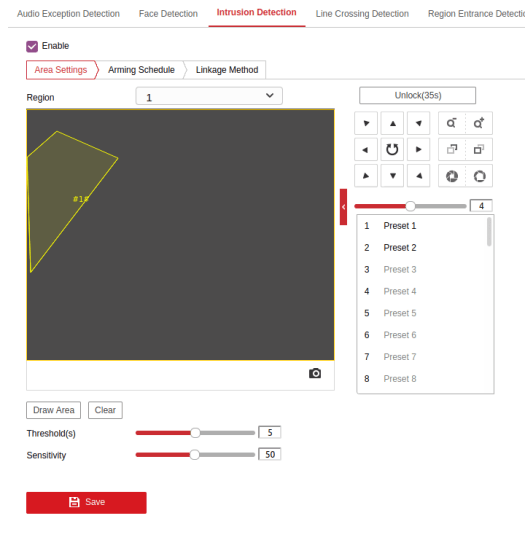 Line crossing detection is the next smart event I’ve tested. 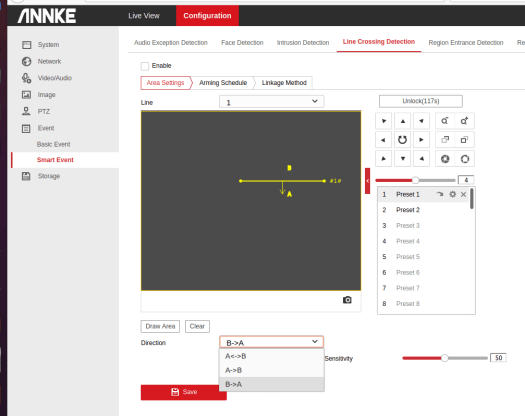 We can draw a line then select A<->B. A->B, B->A, or B->A direction. I selected B->A to detect people entering home, but not when they leave.

I could not make it work after several attempts, so I went back to Windows, and tried with Internet Explorer since Firefox and Edge would not work. I turns out the web interface relies on ActiveX so that explains it…  Line crossing did not work, because I did not place it in the right location. 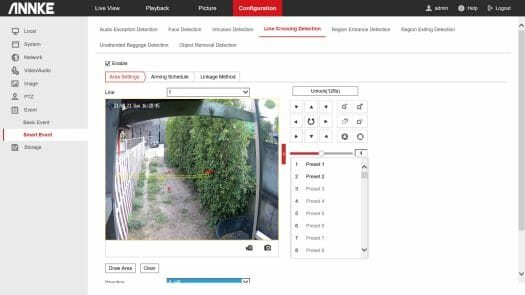 With the live view working, it’s much easier to set the areas or lines used by smart events correctly, and once everything was configured properly, line crossing detection did work. 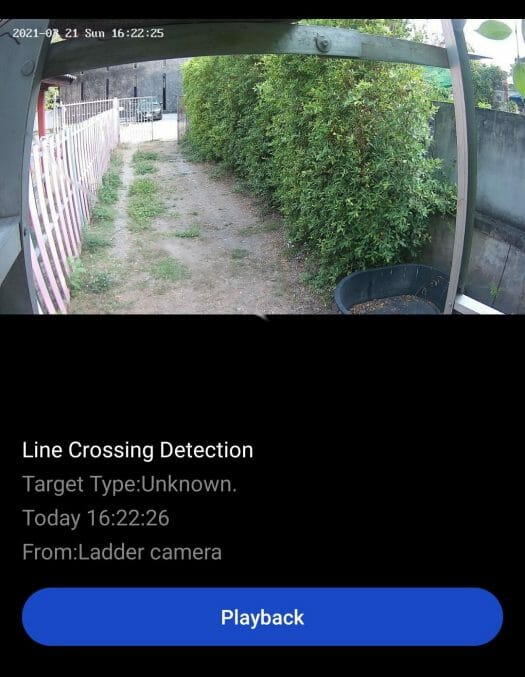 The region entrance detection will trigger an alert when people or objects enter a user-defined area. 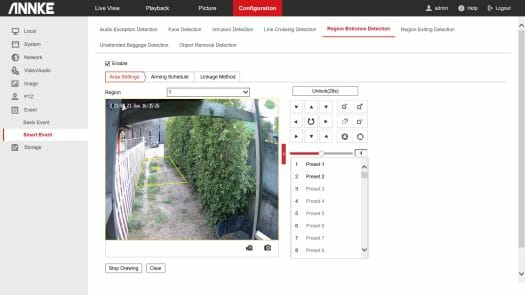 No problem during testing here. 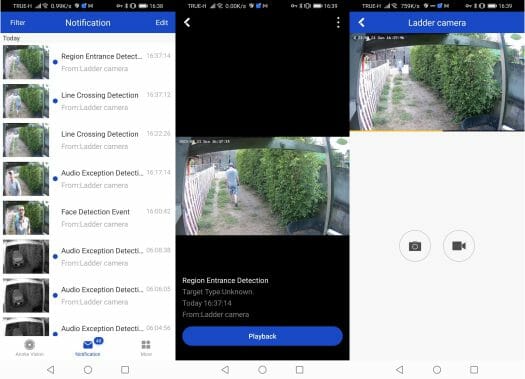 Region Exiting detection is similar, except it will only be triggered when people leave the area. 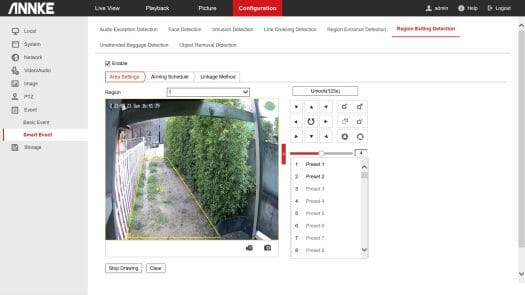 I defined a zone in my entryway, and once I reached the street a notification popped up in Android. 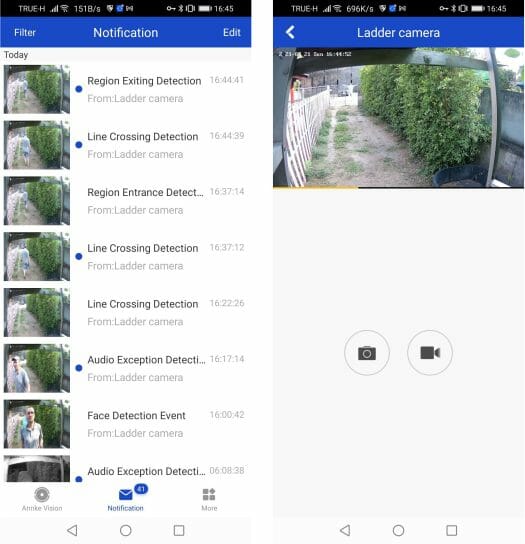 Unattended baggage detection can be useful in airports, buses, train stations, and so on. 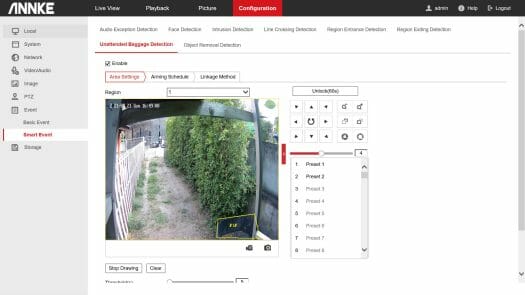 We need to define a zone, set a threshold timer (5 seconds minimum and up to 100 seconds), plus a detection threshold. 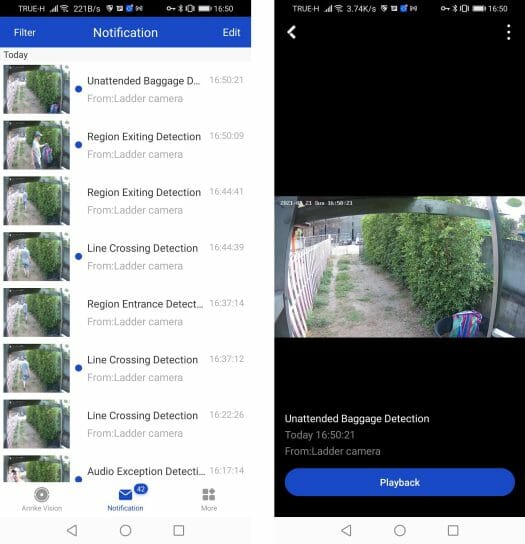 I placed some bags in the area, and sure enough, it was shortly detected with an “Unattended baggage” alert showing in the notification section.

Object removal detection works in a similar way with a threshold in seconds, sensitivity, and a user-defined area to be monitored by the camera. 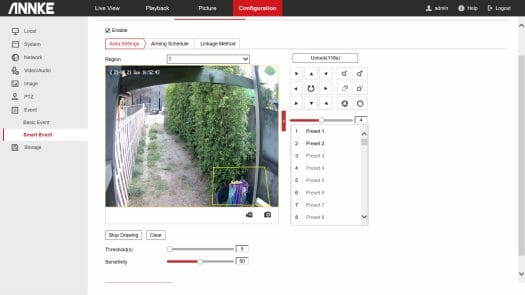 So I went to take out the bag, but nothing happened. On my second try, I went to install a chair with a stuffed Santa Claus doll. 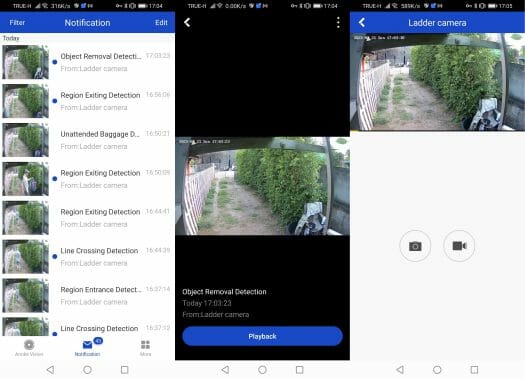 Object removal detection did work, but with the 5-second threshold, the thief was not caught on camera, and the one-minute recording only showed the empty chair…

On my third try, I moved the chair in the entryway… 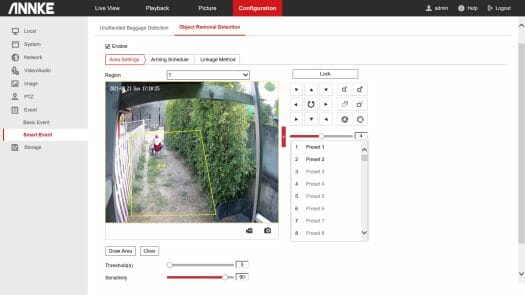 I also increased sensitivity to 90 to increase the chances of getting caught. Then I walk to the chair, wave my hand to the camera basically saying “Hello everyone, I’m here to kidnap Santa Claus”, took Santa Claus with me, and slowly walked towards the camera, and on my way inside the house. No detection occurred, so that feature does not seem reliable at all.

Annke CZ400 / Hikvision DS-2DE2A404IW-DE3/W AI security camera brings useful features that should bring the number of false alerts generated by traditional motion detection much lower, and most of the advanced features/smart events work fine. But I found cases where reliability can be an issue, and it’s also disappointing that Internet Explorer appears to be required to access all the features accessible from the web dashboard.

If you’d like to purchase Annke CZ400 AI security camera, you can do so on Amazon for $259.69.  You may want to purchase a PoE injector for powering the camera, and if you’re not going with ceiling mounting, a wall-mounting bracket needs to be purchased separately for $22.

If you have any questions, please make sure to ask them soon, as believe it or not, CNXSoft wants his ladder back! 🙂