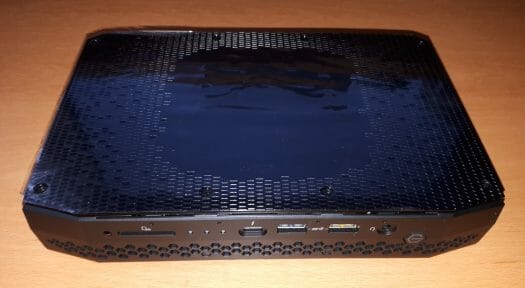 The Enthusiast Phantom Canyon is Intel’s flagship product from its latest NUC 11 range of mini PCs. Specifically targeting gamers it includes an NVIDIA RTX 2060 GPU. In this article, I take a brief look at the performance under Windows and compare it against Intel’s previous NUC with a discrete GPU: the NUC 9 Extreme Ghost Canyon.

The NUC11PHKi7C physically consists of a 221 x 142 x 42 mm (8.70 x 5.59 x 1.65 inches) rectangular plastic case which is remarkable because of its size and is similar to just a graphics card like NVIDIA’s GeForce RTX 2060 Founders Edition (229 x 113 x 35 mm). It is an actively cooled mini PC and uses Intel’s 10 nm Core i7-1165G7 Tiger Lake processor which is a quad-core 8-thread 2.80 GHz processor boosting to 4.70 GHz with Intel’s Iris Xe Graphics. But it also includes NVIDIA’s N18E-G1-B notebook graphics card which is a GeForce RTX 2060 mobile GPU. As a Max-P (max-performance) card, its power is limited to 115W as opposed to 160W for the desktop equivalent and consequently has lower clock and memory speeds.

On booting the NUC11PHKi7C the most striking feature is that the top lights up with a blue skull. This can be changed either physically by modifying/replacing the ‘silhouette’ inside the device: 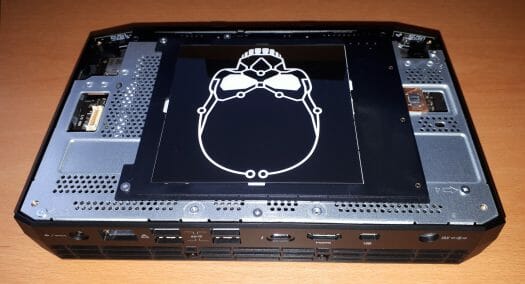 or with settings in the BIOS or through running the Windows ‘Intel NUC Software Studio’ application: 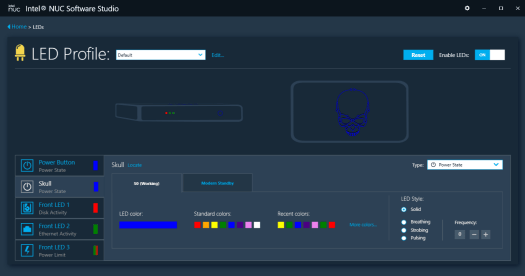 Originally I intended to use the two 32GB sticks of Team Group’s memory from my NUC9i7QNX in my new NUC11PHKi7C. However, after installing the memory, booting resulted in the power light flashing three times indicating a memory issue. As a result, I had to use some Samsung memory as it booted without issue.

During testing using 1080p monitors I found that DirectX12 refused to run: 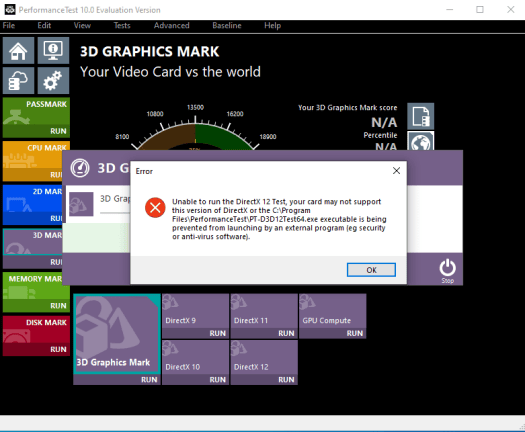 whereas there were no problems when using a 1440p monitor even at 1080p resolution. After much experimentation I found that disabling and then enabling the NVIDIA display adapter fixed the issue until a reboot: 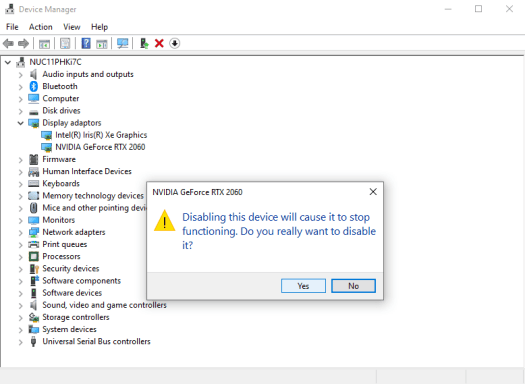 I also had intermittent HDMI audio using 1080p monitors which could be fixed by unplugging and replugging the HDMI cable so it appears there are some initial driver issues.

Originally, I performed a clean Windows installation on both NUC. However, because of investigating the above issues I had to repeat the installation on the NUC11PHKi7C prior to benchmarking but when doing so encountered the issue of update KB5001649 failing to install so resorted to installing it manually: 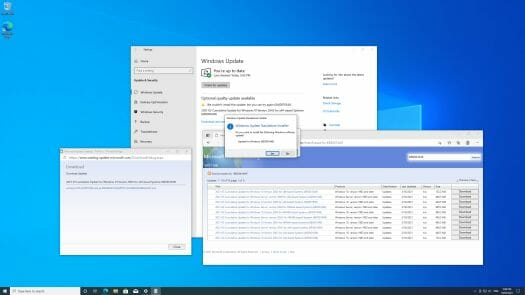 This resulted in a slight difference of Windows versions between both NUC: on the NUC 9 Extreme the OS build was 19042.868 after applying all updates but now on the NUC 11 Enthusiast it became 19042.870.

Prior to running any benchmarks, I set the performance to maximum. On both the NUC 9 Extreme and NUC 11 Enthusiast this can be set in the BIOS: 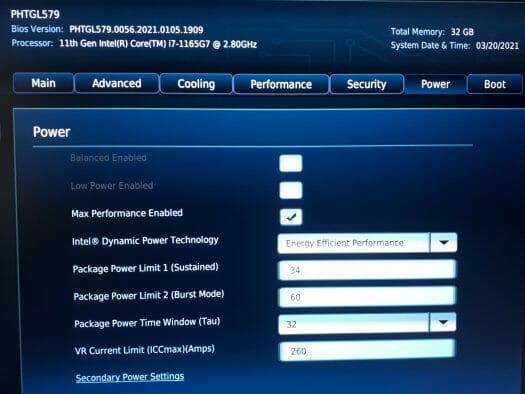 and this can be checked by using Throttlestop although I did not attempt to change the PL values manually: 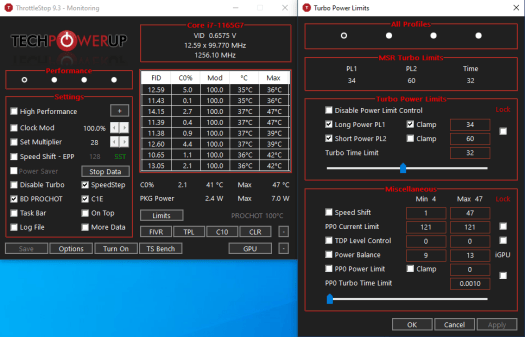 Interestingly the ‘Intel NUC Software Studio’ application also includes the ability to set the performance mode and works by changing the value for PL1 dynamically at runtime: 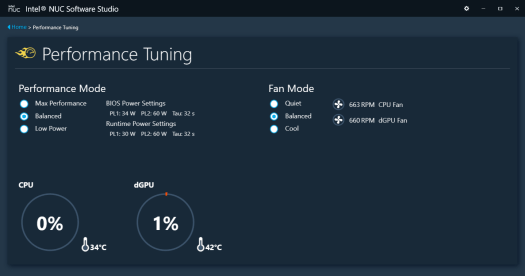 Typically I also change the power plan to ‘High performance’ however on the NUC 11 Enthusiast this option is not available: 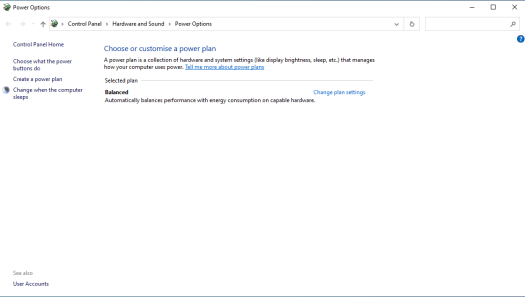 First a quick look at the hardware information: 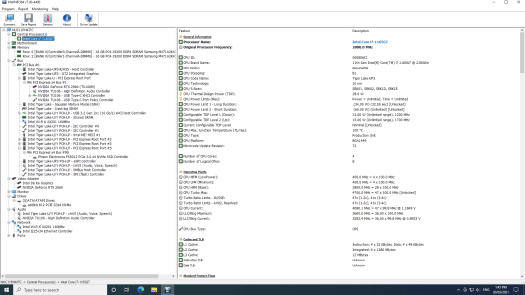 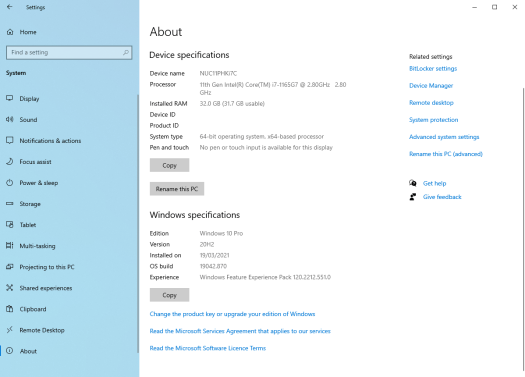 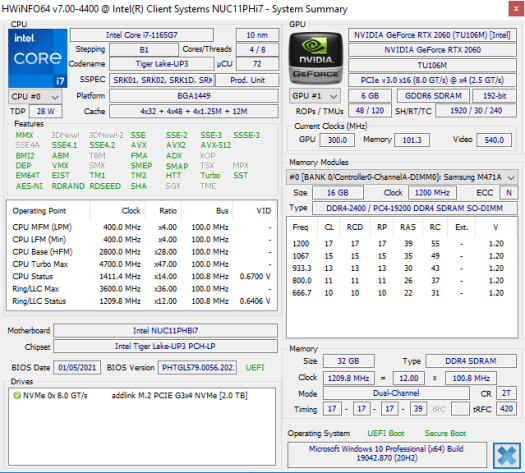 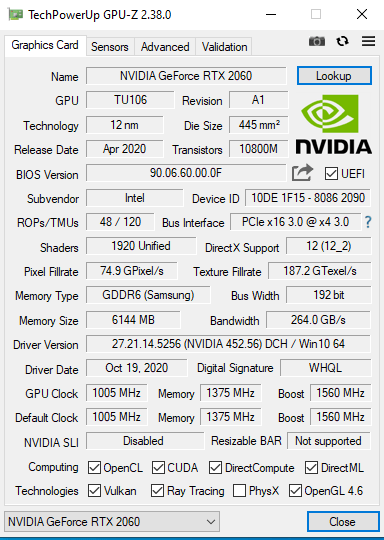 I then ran my standard set of mini PC benchmarking tools including: 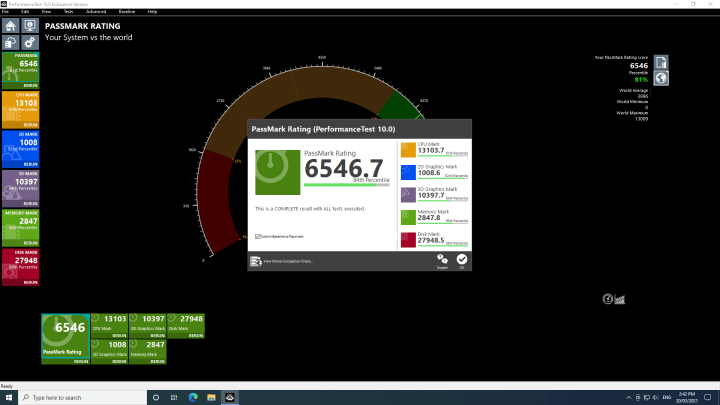 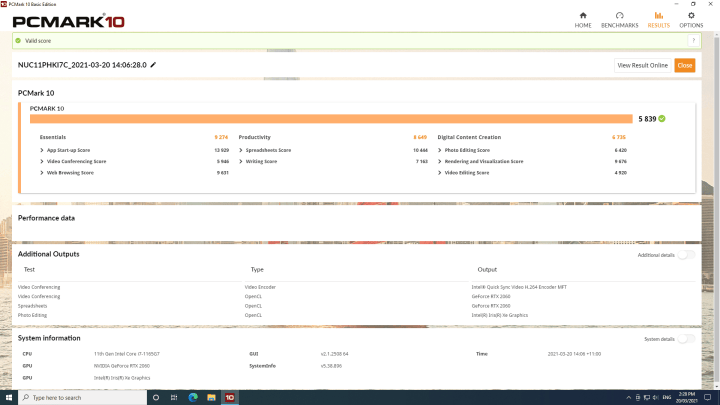 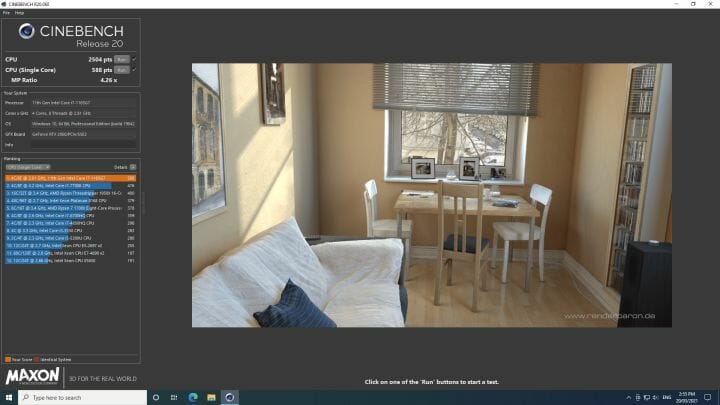 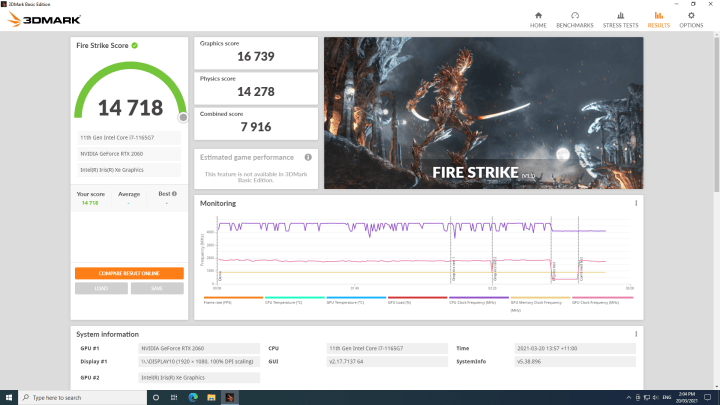 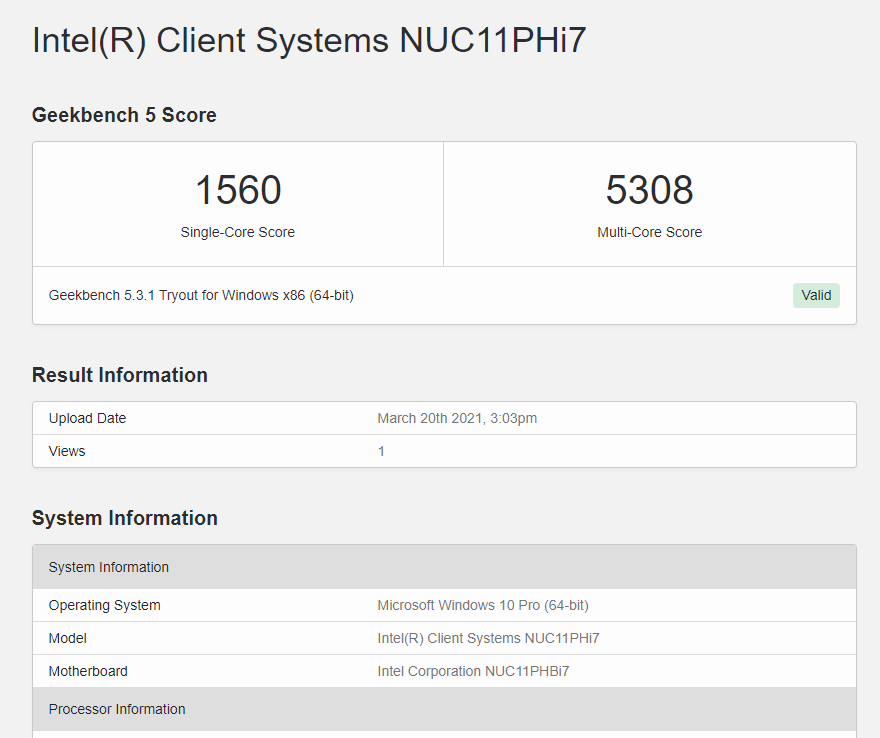 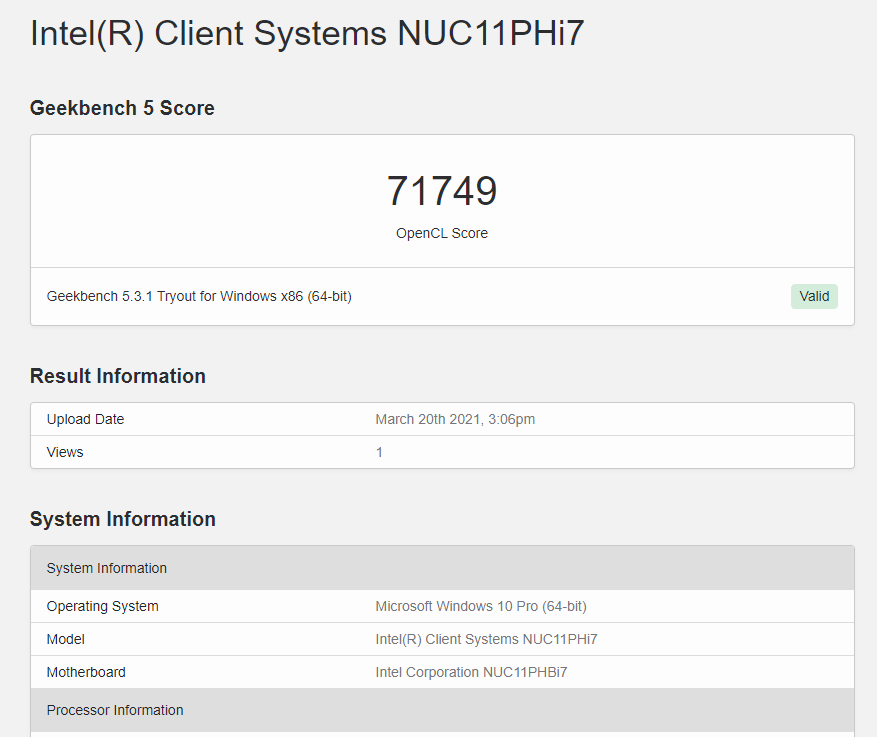 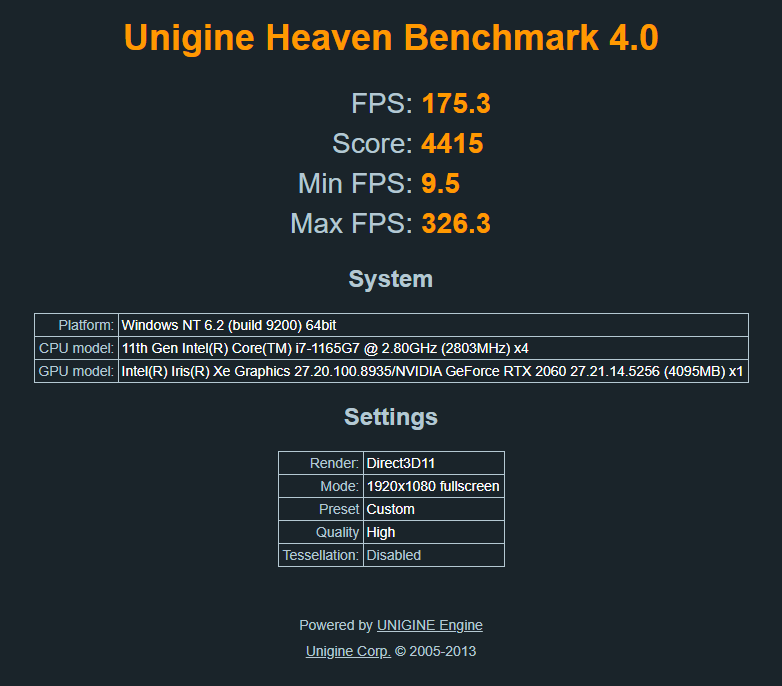 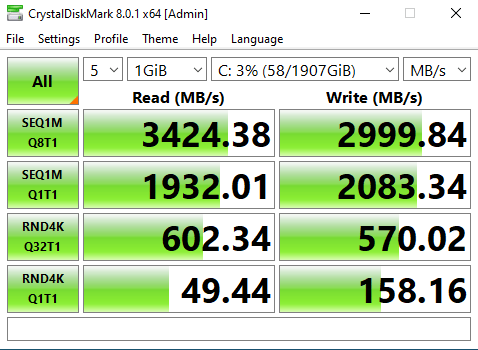 and also my specific set of Phoronix Test Suite tests:

The results allow the NUC 11 Enthusiast to be compared to the NUC 9 Extreme:

One of the issues with the NUC 9 Extreme is slow read performance for NVMe drives connected via the Compute Element compared to when connected via the baseboard. Fortunately, the performance seen with the NUC 11 Extreme is aligned with the manufacturer’s specification. Also, the impact of using a mobile RTX 2060 can clearly be seen when compared to the desktop version with, for example, Heaven showing a 19% loss.

For both NUC I also performed a quick test of three games under Steam in Windows (Counter-Strike: Global Offensive, Grand Theft Auto V and Shadow Of The Tomb Raider) at 1920×1080 resolution. I used the default settings for CS:GO and GTA V together with each of the graphic presets in SOTTR: 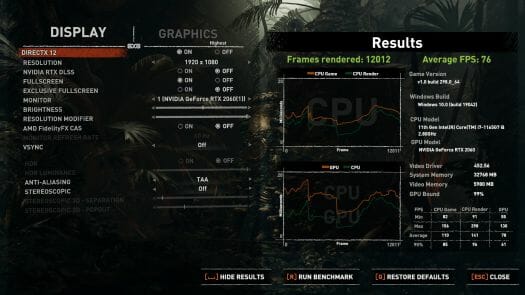 Again the impact of the mobile GPU was evident: 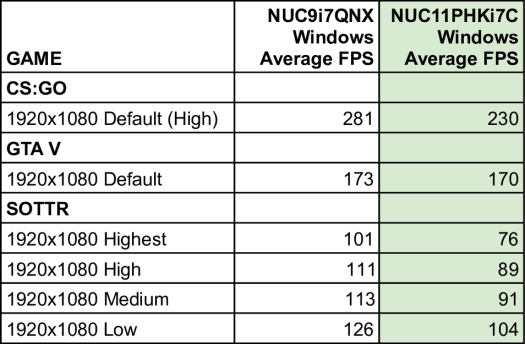 As a follow-up, I intend to look at the performance under Ubuntu. I’ve already tried to boot from a LiveUSB created from the Ubuntu 20.04.2 ISO: 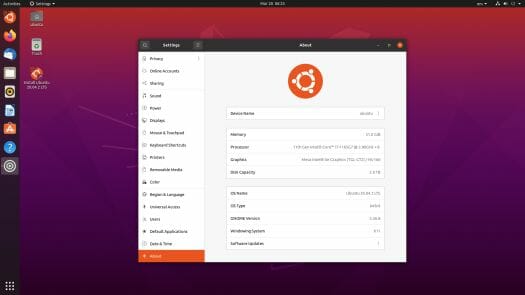 which was successful with working ethernet and wifi was also detected so that is a good start.

As a gaming mini PC, it meets the brief but with a caveat given its limitations due to its size. Because it uses a mobile GPU the gaming performance can be lower than a desktop GPU. In the few games I tested, this could be as much as 25% with an average of 17%. There is still a lot of further testing to be completed including network performance, thermals, power usage, investigating overclocking/underclocking capabilities as well as performance under Ubuntu. However, the initial performance results are favorable for an albeit pricey mini PC.

amazing can you try shadow of tomb on 1440p please?

Also how is the noise? when playing is it too loud? annoying?

Noise is very acceptable and is more like a humming sound rather than a wooshing one (if that makes sense). During the above 1440p SOTTR benchmark I measured it at around 44 dBA on the NUC11PHKi7C whereas the NUC9i7QNX reached over 50 dBA. Ambient was around 33 dBA.

Nice comparison.
But I think anyone who has the i9 NUC is in a different class.
The NUC11 Enthusiast is more a direct upgrade for the NUC8 Enthusiast, myself included.

I’d love to see those two pitted against each other.

Thank you so much for this article! I was owning the NUC8i7HNK and I decided to return it to INTEL due to the lack of driver for the AMD graphics part (it seems resolved for a few days). My assumption is with the Nvidia GPU I shouldn’t face such an issue as the drivers are provided by Nvidia directly? Other question, can you replace the GPU for a future update (limited by the power supply obviously) or it is integrated into the motherboard

Your assumption is correct as there are no issues getting the NVIDIA driver either through Windows updates or by manually downloading directly from NVIDIA’s site for the latest version if preferred.

I get my answer on youtube, the graphic cards are embedded so it is impossible to swap later on: just google intel nuc enthusiast teardown to have access. I believe the intel nuc 9 with the possibility to include a geforce mini is still a better option for future upgrade

There is a rumour to the existence of the Intel NUC 11 Extreme or at least its Compute Element which may be of interest when considering upgradability or imminent purchase of the NUC 9 Extreme.

I wonder as well, it has Thunderbolt 4, so it doesn’t close the door for an external graphic card right?

In theory yes and then maybe use PRIME to switch between iGPU, dGPU and eGPU.

And here I am with second hand J3455 and soon, i3-5005 nuc. Cannot afford new nuc. I’d rather get notebook rather than new nuc as the price is almost the same. And you get screen, and battery (minus miniscule fan).

But, the nuc 3-years warranty is a big plus.

Yes but why would anyone support a vendor that builds-in hardware backdoors? We should be suing intel not supporting intel.