ESP32-C3 is the first RISC-V wireless SoC from Espressif Systems, and at the time of the initial announcement promised to cost about the same as ESP8266 but adds support for Bluetooth 5.0 LE besides 2.4 GHz WiFi, and retain software compatibility through the ESP-IDF framework.

We were also told the goal was to provide ESP8266 compatible modules, and AI-Thinker has just announced five new ESP32-C3 modules compatible with earlier ESP8266 & ESP32 modules as shown in the table below. 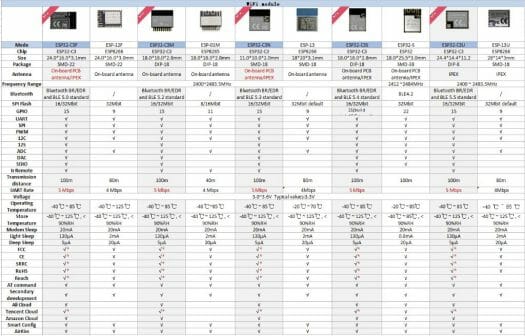 The table above is quite low resolution but that’s the best I could obtain from the company… It’s also a complete mess, not showing all alternative ESP8266 or mistaken in board sizes. So I’ll try to give a short summary of differentiating features and equivalent ESP8266/ESP32 modules: 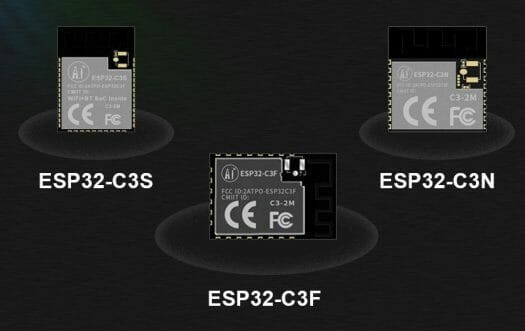 The new ESP32-C3 modules also offer more GPIO, and some new interfaces like I2S, DAC, SDIO, and “IR remote”. Another benefit will be longer battery life thanks to much lower power consumption in sleep modes:

The company also lists supports for cloud services such as Alicloud, Tencent Cloud, and AWS. ESP32-C3S is the only one from the list designed as a substitute for an ESP32 module, namely ESP32-WROOM-32D, and has basically the same features, except for the use of a single RISC-V core, the addition of an IR transmitter, a wider temperature range (-40 to +85°C), and the lower power consumption as discussed above. You’ll find the datasheet for each module on the documentation website.

AI Thinker is currently taking orders for the modules on Alibaba, with the price for the modules being $1.79 for 100 to 999 pieces, and as low as $1.38 per unit for 10k or greater orders.

Much lower consumption? From the article it is worse than ESP8266 and and ESP32. Where the data mixed up?

I can see the short-term benefit of keeping them pin-compatible with some ESP8266 modules, but these ones are a pain to program due to the 2 required transistors to drive GPIO0/RST and in order to reduce a complete device size, BOM and complexity it’s really important to simplify this mess, ideally by using DTR only so that it’s trivial to program them using any cheap CH340E.

Do they save much money, using Risc-V ISA and CPU ?

A combination of ESP32-C3 and LoRa module would be very interesting for battery powered LoRaWAN module? Do you know such a development?