The Linux capable BeagleV SBC, now called “BeagleV Starlight”, was announced last January with a StarFive JH7100/JH7110 64-bit RISC-V processor, and developers and beta users have just started to get their hand on the board in recent days. 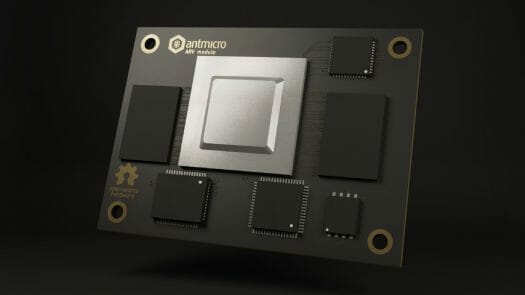 The company did not provide the complete specifications for the module, but based on public information available, Antmicro ARVSOM should feature the following:

Note we were just informed that BeagleV and ARVSOM will first ship with the JH7100 dual-core RISC-V processor, it will eventually be upgraded to JH7110 quad-core U74 RISC-V processor with Imagination Tech IMG BXE-4-32 GPU, and PCIe support. 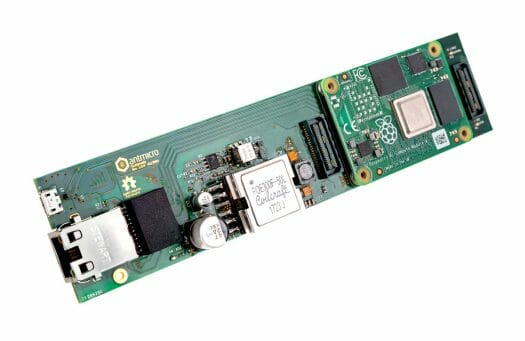 The RISC-V CPU module will be compatible with Scalenode baseboard, shown with a Raspberry Pi Compute Module 4 above, with Gigabit Ethernet and PoE, several expansion connectors in a server-oriented form factor, as well as an M.2 key M PCIe connector for SSD storage or add-on boards such as AI accelerators like Google Coral accelerator.

Up to 18 Scalenode boards can be installed in a 1U rack to build continuous integration systems, or custom, open-source hardware & software-based systems for edge AI applications. ARVSOM should also be compatible with any other Raspberry Pi CM4 baseboard, especially once the JH7110 model comes out with PCIe and graphics acceleration.

Further information can be found in the announcements for the module and the baseboard.

And so RISC-V begins! Cool.

Assuming that this board exposes same interfaces as BeagleV, (including both CSI-2 interfaces, which could be tricky) through this module there could be the easiest way to make more complex robots and computer vision systems.

Both BeagleV and ARVSOM looks great for early adopters of RISC-V. With deployment of those I would certainly be more cautious as the StarFire is privately held solely China company and for security domain in EU/US this is a no go. So evaluation and development fine, deployment no.

Combined with NVIDIA’s patents (read the license) and Imagination Tech’s commitment to open source (sarcasm), can someone explain what the point of using RISCV was?

that’s a gorgeous form factor and spotting a colossally huge, flat, & dominating Coilcraft transformer. I hope imagination tech & antmicro can give the linux drivers on this gpu a decent treatment. ditto on the dsp & vision chips.

again curious what exactly the high density ports are that appear on both sides of the module. talk of
m.2 but not visible or not really what’s happening. I’d love to see higher density connectors make big inroads.