Inkplate 6PLUS is an updated version of Inkplate 6 ESP32 powered 6-inch ePaper display that was introduced in 2019, wand comes with a higher 1024 x 758 resolution, and the addition of a touchscreen and a frontlight.

Just like the original product, Inkplate 6PLUS makes use of recycled e-paper displays without thousands of screens currently in stock. Refresh performance per pixel is faster and similar to Inkplate 10, which leads to a complete screen refresh being about as fast as on the original Inkplate 6 despite the higher resolution. 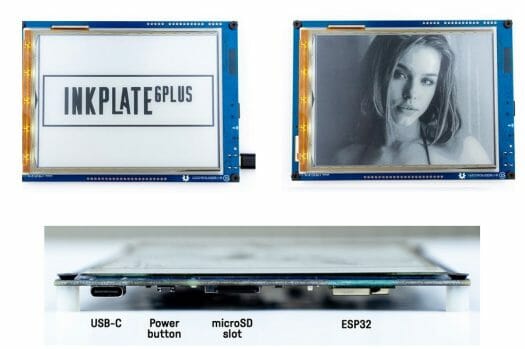 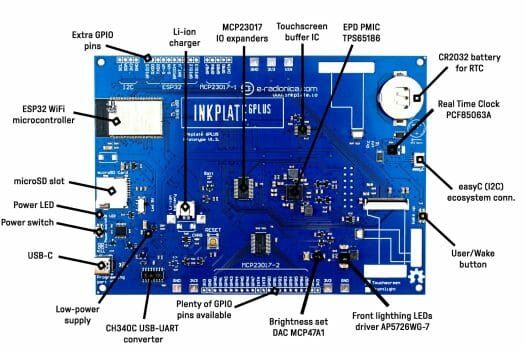 Software support remains the same with Arduino libraries 100% compatible with Adafruit GFX and a MicroPython module that facilitates the rendering of text, images, and line art. Tools to prepare images or design a user interface for the wireless ePaper display include an Online Image Converter and a GUI Designer. Hardware and software resources can be found on e-Radionica’s GitHub account.

The display can be used as a high-latency information panel (e.g. calendar, temperature, weather, and/or air quality data), a minimalist e-paper typewriter, an open-hardware e-reader, a collaborative task tracker, and for all sort of art projects. 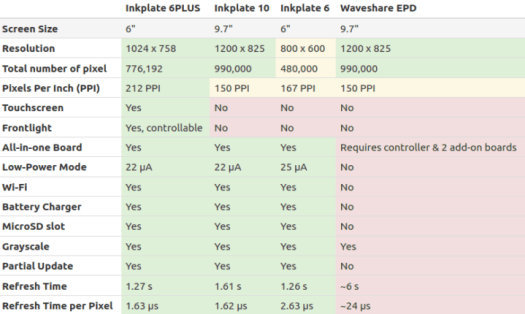 The company has also updated its comparison table to show the benefit of the new model against previous versions, and a standard, non-connected e-Paper display from Waveshare.

While Inkplate 6PLUS is the only ePaper display with a touchscreen from the list above, there’s at least one alternative courtesy of M5Paper ESP32 IoT development kit with a 4.7-inch e-Ink touchscreen display. It should be noted that for projects that require longer-term supplies, Inkplate relies on recycled displays, so the company may not be able to source the display in a couple of years, and may have to switch to another supply of new, likely more expensive, e-Paper displays.

Inkplate 6PLUS is available now on Crowd Supply for $159 or $179 with a 3D printed enclosure with free international shipping. The project is about 50% funded out of its $15,900 goal at the time of writing, and backers should get their reward(s) ship around mid-November 2021.

It is quite common resolution for 6″ parallel e-paper displays.

I’ve noticed e-Ink/ePaper displays always have odd resolutions. I’m not sure why, but there must be a technical explanation.

Looks like the e-book reader I reverse engineered in the past: http://linux-sunxi.org/PocketBook_Touch_Lux_3 except that this doesn’t have a full Linux capable SoC, and looks more hackable.

Even the display PMIC is the same. I wonder if display is also one of those ED060XD4 or similar variant. Those did cost $15 on aliexpress a few years ago. More with touchscreen and front light. (~$50-60).

@megous, here is another driver board for those and other e-paper screens – https://github.com/vroland/epdiy