Several low power neural network accelerators have been launched over the recent years in order to accelerator A.I. workloads such as object recognition, and speech processing. Recent announcements include USB devices such as Intel Neural Compute Stick 2 or Orange Pi AI Stick2801.

I completely forgot about it, but Google also announced their own Edge TPU ML accelerator, development kit, and USB accelerator last summer. The good news is that Edge TPU powered Coral USB accelerator and Coral dev board and are going to launch in the next few days for respectively $74.99 and $149.99. 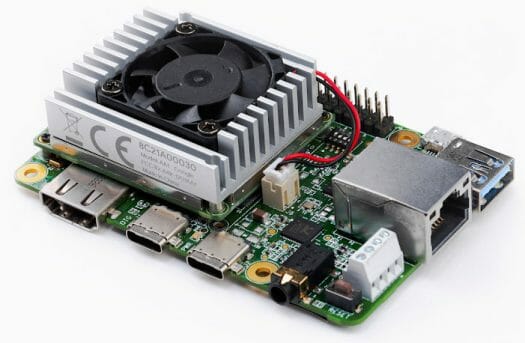 Coral dev board is comprised of a base board and SoM wit the following specifications:

A compact (25x25mm) 5MP camera module will also be offered as option.

The board will run Debian Linux, support TensorFlow Lite framework, and be programmable with Python, and C++ language support coming soon. 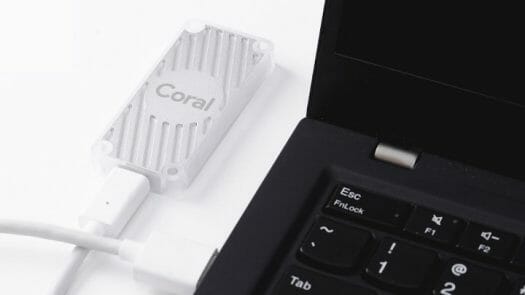 The USB accelerator supports Debian Linux on the host CPU, TensorFlow Lite framework, and works with Raspberry Pi 3 board, and basically any 64-bit Arm or 64-bit x86 platform supported by Debian.  Google claims their Edge TPU can execute state-of-the-art mobile vision models such as MobileNet v2 at 100+ fps in a power-efficient manner.

I’ve been informed Google will showcase their new Edge TPU coprocessor, development board, and USB accelerator on Wednesday at the Tensorflow Dev Summit 2019. However, you’ll already find plenty of documentation, and resources such as pre-compiled models and the Edge TPU Model Compiler on Google Coral website, as well as on a dedicated AIY Projects page.

The Coral website only mentions Mouser as the distributor, but both the Edge TPU Coral USB accelerator and Coral development board will also be sold via Seeed Studio, and likely other distributors. 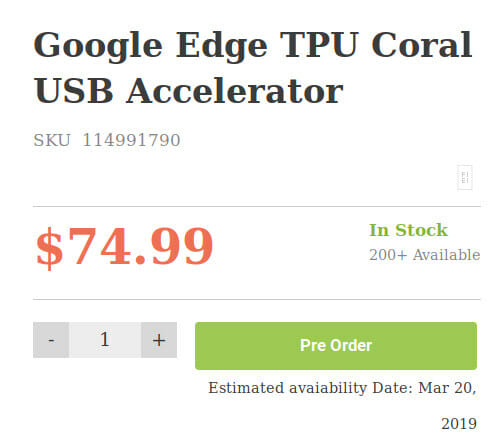 A screenshot of a page now removed shows the USB accelerator is expected to starting shipping on March 20th, and the same thing for the Coral development board. The SoM will be available separately to integrate into commercial projects, but I could not find any pricing information at the time of writing.

There is also the 5 Meg Coral Camera.

Love how the Corel USB accelerator mentions Note, however, that you should use a USB 3.0 port for the best inference speeds, says Google. Although the Raspberry Pi has USB 2.0 shared bandwidth ports only, it still works.

Google Coral gets out of beta: https://developers.googleblog.com/2019/10/coral-moves-out-of-beta.html