We’ve just written about a WiFi 6 M.2 card based on JODY-W3 module that works with NXP i.MX 8 evaluation and development kit. But the u-Blox module appears to be the solution of choice for other NXP i.MX 8 platforms, as well as iWave Systems upgraded their existing systems-on-module and one single board computer with JODY-W3 adding WiFi 6 (802.11ax) and Bluetooth 5.1. 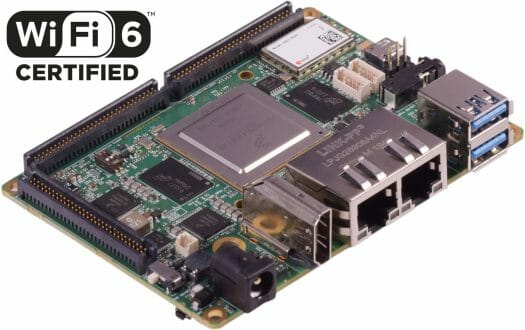 We first covered iW-Rainbow-G27S single board computer in January 2020. The board comes with NXP i.MX 8QuadMax hexa-core Cortex-A72/A53 processor, up to 8GB RAM, quad display support via HDMI, eDP & MIPI DSI, dual Gigabit Ethernet, and more.  At the time, the board was offered with optional 802.11 a/b/g/n/ac WiFi 5 + Bluetooth 5.0, but now adds 802.11ax WiFi 6 connectivity for higher bandwidth applications.

The company says the improved speed (up to 4 times) and efficiency (e..g TWT) of WiFi 6 over WiFi 5 will make the SBC and modules suitable for a wider range of industrial, automotive, and Smart Home applications. Notably, iWave Systems mentions the need for wireless 4K Video streaming and audio processing at the edge in Industry 4.0 solutions, and WiFi 6 can also help with more efficient OTA firmware upgrades in automotive applications while a vehicle is parked.

Android, Linux, Ubuntu, and QNX operating systems are all supported o nNXP i.MX 8 platform. It’s very likely other i.MX 8/8M/8X platforms will also support WiFI 6 through u-Blox modules since those are the ones used on NXP devkits. More details specific to iWave NXP i.MX 8 WiFI 6 hardware can be found on the company’s website.