Loongson has officially launched the first processors based on LoongArch CPU instruction set architecture designed for made-in-China SoCs without the need to license technology made outside of China.

Loongsoon LS3C5000L  (3C5000L) 16-core server processor clocked at up to 2.5 GHz is now official and is apparently comprised of four LS3A5000 (3A5000) LoongArch processors designed for desktop computers and laptops. 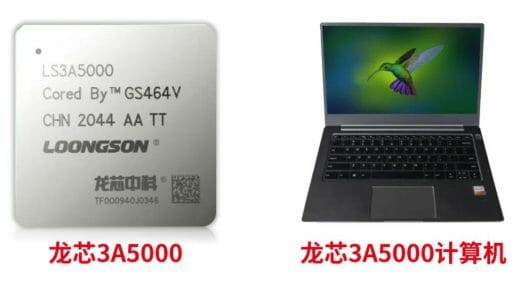 Performance-wise, Loongson 3A5000 is said to achieve 26+ points in the single-core and floating-point SPEC CPU2006 benchmarks, and over 80 in the multi-core version of the benchmarks. That’s about 50 percent higher performance than the previous pin-compatible Loongson 3A4000 processor, and the company also claims 30 percent lower power consumption. The SoC also embeds hardware security with a secure and trusted module, and an SM2/3/4 crypto engine with a performance of more than 5Gbps, as well as support for other crypto algorithms.

Software support includes Loongnix Linux operating system with a desktop environment, LoongOS for industrial and terminal applications (probably Loongnix without graphics), GCC, LLVM, and GoLang compilers, and three virtual machines for Java, JavaScript, and .NET. As previously reported, Loongson also implemented Arm and x86 binary translation, so Windows and Android should also be supported. But considering the plan is to avoid “foreign” technology they may not be the preferred platforms. 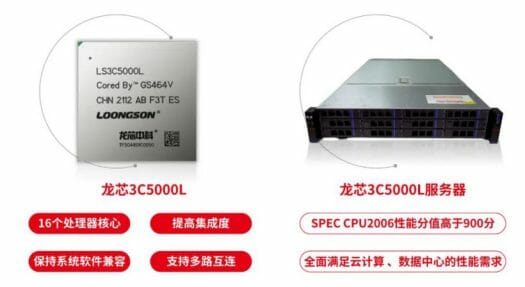 ITHome wrote both about 3A5000 and 3C5000L, a 16-core LoongArch server processor that integrates four 3A5000 processors, and archives more than 900 points in SPEC CPU2006 performance score when used in a server with four 3C500L processors. That makes the server powerful enough to meets the performance requirements of cloud computing and data centers for the Chinese market.

It was clear that LoongArch was designed in response to US sanctions against Chinese companies, but just in case there were any doubts that the initiative was political, instead of serving a technological purpose, Loongson 3A5000 is codenamed  “KMYC70” to “commemorate the 70th anniversary of the War of Resist US Aggression and Aid Korea” (as per Google Translate), while Loongson 3C5000’s codename is “CPC100” to celebrate the 100th anniversary of the founding of the Chinese communist party. Those codenames are also etched into the silicon if we are to believe the photo above.

“It was clear that LoongArch was designed in response to US sanctions against Chinese companies….”

Bullshit. Work started on this waaaay before the current US sanctions on China, back in 2010. And it’s as Chinese as chop suey. It’s MIPS64-based using US and German tech.

Chinese very rarely use own designs. It is something like ‘national idea’ to steal something, do it better and announce to the rest world they do it.

But, it’s a normal nowadays.

They posted patches for musl, qemu and linux in the past few months, with several other projects coming. I did an initial review of the kernel patches, which are clearly based on the arch/mips code with some bits taken from arch/riscv and arch/arm64, and that pretty much also reflects their instruction set.

LoongArch code has been merged in Linux 5.19
This is a new ISA, according to all western experts (you can search the web)

Also, loongson added a lot of code and optimisation for it’s past MIPS64 compatible CPUs. For decades now, they are the best MIPS developper. They mastered MIPS like noone.
They bought MIPS when it was left dead and they made great soc’s based on MIPS.
So even if they remained on MIPS, they have every right to.

If there’s no equivalent to Intel’s Management Engine backdoor inside, that will be good.

you can buy desktop or mainboard from Taobao, but laptop may be later