Linus Torvalds has just announced the release of Linux 5.13:

So we had quite the calm week since rc7, and I see no reason to delay 5.13. The shortlog for the week is tiny, with just 88 non-merge commits (and a few of those are just reverts). It’s a fairly random mix of fixes, and being so small I’d just suggest people scan the appended shortlog for what happened.

Of course, if the last week was small and calm, 5.13 overall is actually fairly large. In fact, it’s one of the bigger 5.x releases, with over 16k commits (over 17k if you count merges), from over 2k developers. But it’s a “big all over” kind of thing, not something particular that stands out as particularly unusual. Some of the extra size might just be because 5.12 had that extra rc week.

And with 5.13 out the door, that obviously means that the merge window for 5.14 will be starting tomorrow. I already have a few pull requests for it pending, but as usual, I’d ask people to give the final 5.13 at least a quick test before moving on to the exciting new pending stuff..

The previous release, Linux 5.12,  added support for the ACRN hypervisor designed for IoT & embedded devices, Playstation DualSense & Nintendo 64 game controllers, as well as Nintendo 64 data cartridges, implemented dynamic thermal power management via a subsystem that allows the power usage of groups of devices to be capped to meet thermal constraints, and said goodbye to O-profile, replaced by perf events, among many other changes. 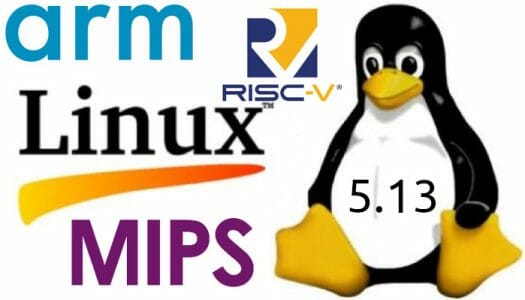 Some notable changes for Linux 5.13 include:

Besides preliminary support for Apple M1 SoC, there were many Arm-related changes as usual:

Linux 5.13 updates for the MIPS architecture

Only a few changes for MIPS this time around:

You can also read the full Linux 5.13 changelog  with comments only,  generated with the command git log v5.12..v5.13 --stat. Alternatively, KernelNewbies website should soon have a detailed changelog of Linux 5.13.

Totally forgot about that. Hoping to get more support for the SSD20xD into 5.15 as it’s really shaping up nicely.