QUARK may look like the perfect weapon to hijack a plane, but instead, it’s an open-source, Arduino-based wireless multitool for hardware engineers equipped with a full-color screen and touch-based controls.

Based on ESP32 WiFI & Bluetooth wireless SoC, Mulin Group’s QUARK is an ultra-portable multimeter, signal generator and oscilloscope, a bit like IkaScope WiFi Pen-Oscilloscope, except having a laptop or phone to visualize measurements is only optional. The company also compares it to DT71 smart tweezers which do not have an oscilloscope function due to the tiny display. 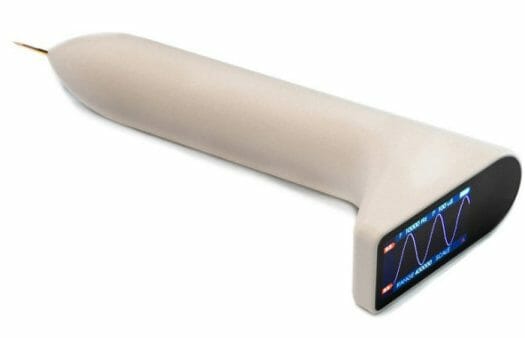 QUARK will be open-source hardware, and the firmware is written in the Arduino IDE to allow users to easily update it if needed. It appears only the Bluetooth connection method is used, i.e. not WiFi, when the tool is connected to a smartphone. It’s also possible to connect QUARK over USB to retrieve the data.

Two similar phone apps have been developed for QUARK. The first has been developed with AppInventor, and is only available in Android, while the second, written with Flutter, works in both Android and iOS. The former was developed to help novice developers acquaint themselves with app development.

Mulin Group did not mention any PC-based program for QUARK, but since it’s open-source, it may eventually become supported by Pulseview & Sigrok open-source programs which we’ve tested in the past with USB123 USBee AX Pro USB logic analyzer and UNI-T UT61E digital multimeter.

QUARK Arduino-based wireless multitool has just launched on Crowd Supply with a $20,000 funding target. There’s a single reward for $150 for the device fully assembly with the enclosure, a USB-C probe, and a carrying case. Shipping adds $8 to the US, and $18 to the rest of the world, and deliveries are scheduled to start at the end of February 2022.

Remove the needle and it gets yet more applications

Interesting design decision… What it is supposed to measure, once again?

Can probably be used outdoors once you find the appropriate protection here: https://www.theyfit.co.uk/pages/print-a-fitkit

The project has been canceled and money will be refunded:
https://www.crowdsupply.com/mulin/quark/updates/project-cancellation

The reason is interesting:

Unfortunately, it proved too difficult and risky to transfer the project’s funds from Crowd Supply in the United States to the project creators in Belarus. Essentially, there was too high of a chance the funds would be seized or never released once they arrived in Belarus due to the complexities of the legal requirements for sending money to a company based there.