Xiaomi has now launched its own quadruped robot that looks like a dog with the Xiaomi CyberDog equipped with a more powerful NVIDIA Jetson Xavier NX system-on-module (SoM), a larger and heavier body than competing consumer models, and a price tag of a little over $1,500. 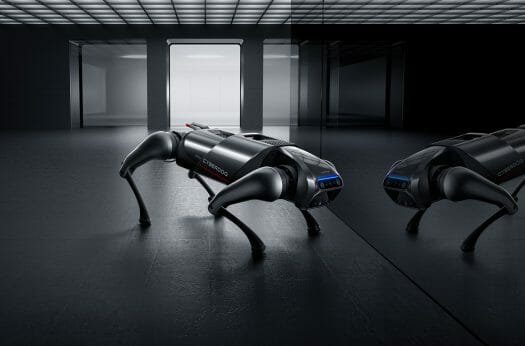 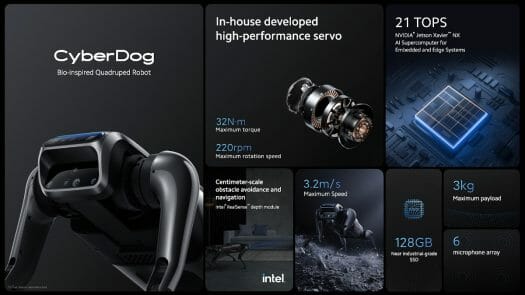 The robot is said to leverage Xiaomi’s smartphone imaging technology, can be trained with its computer vision algorithm, and supports autonomous object tracking, SLAM, and centimeter-scale obstacle avoidance and navigation to let the dog navigate its environment and interact with its owner through face recognition, or voice commands using the built-in 6-mic array.

Xiaomi CyberDog can run at over 11km/h, and perform complicated actions such as backflips. I support the HDMI port and USB-C ports have been added to allow native development directly on the robot by connecting a monitor, keyboard, mouse, or other USB peripherals.

Xiaomi explains it targets the open-source community, robotics enthusiasts,  and developers worldwide with their first robot. The company released 1,000 units of CyberDog for RMB 9,999, or about $1,540 US, earlier this week, and plan to set up a “Xiaomi Open Source Community”.

I wish I had a use case for one of these so I could justify buying it.

Do they have mounting points for a robot arm? Any word on battery capacity/life?

I could not find any much information. Maybe documentation is available but only in Chinese at this time?

I wouldn’t think that these little guys are scratch proof, I wouldn’t be making it roll over in the road or cement or any other kind of hard porous material.

So again the Chinese have stolen tech and in this case made a copy of Boston Dynamics for much cheaper than the original. No surprise here. Billions of $ in development have been spent and the Chinese are reaping its fruit. We are at war with the CCP, we must destroy it if we still value our freedoms and values.

People interested in these type of dogs might want to be aware that on Aliexpress a new store Helloes Store is claiming to sell a Pineapple Dog . First two reviews do not sound great ! I mention it only for reading interest.

Buyer beware use own judgement ?