A few weeks ago, I received Microchip PolarFire SoC FPGA Icicle Kit with FPGA fabric and hard RISC-V cores capable of handling Linux. I wrote “Getting Started with Yocto Linux BSP” tutorial for the board, and I had initially titled the current post “Getting Started with FPGA development using Libero SoC and Polarfire FPGA SoC”.

I assumed I would write one or two paragraphs about the installation process, and then show how to work with Libero SoC Design Suite to create an FPGA bitstream. But instead, I spent countless hours trying to install the development tools. So I’ll report my experience to let readers avoid some of the pitfalls, and hopefully save time.

If we go to the download page, we’ll see Libero SoC v2021.2 for Windows and Libero SoC v2021.2 for Linux. Since my computer is running Ubuntu 20.04, I decided to go with the Linux version. Note you’ll need to create an account with MicroSemi/Microchip before getting started. The very first time it failed due to errors with the website when registering for a new account. 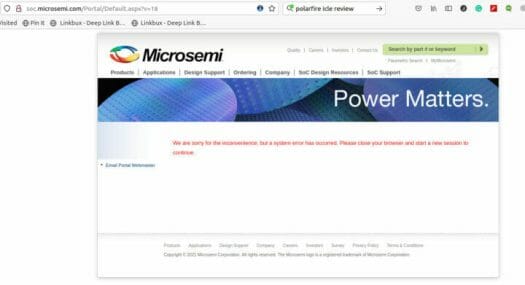 No matter how many times I would try, it would fail with the same error, but I tried a week later and I could eventually access the download link to the Linux version with some simple installation instructions:

If you experience any problems downloading Microsemi’s software, please send an email to [email protected]

This will start a GUI to install the software. 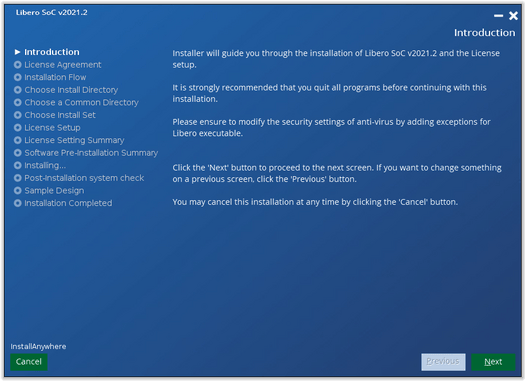 After accepting a license agreement, I opted to install both Libero SoC and setup License since this is required, and I should get a free one-year “Silver” license. 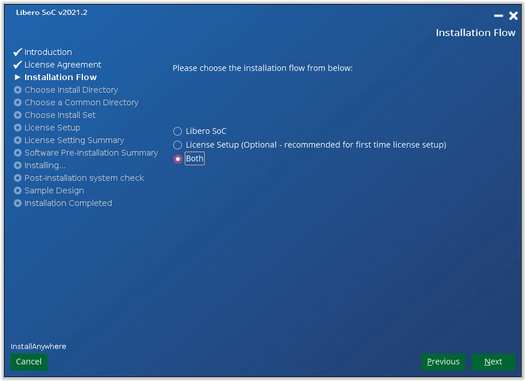 You should install the program in a directory where you have R/W permissions, and installation with the root user/sudo is not recommended. So I went with /home/jaufranc/microsemi. 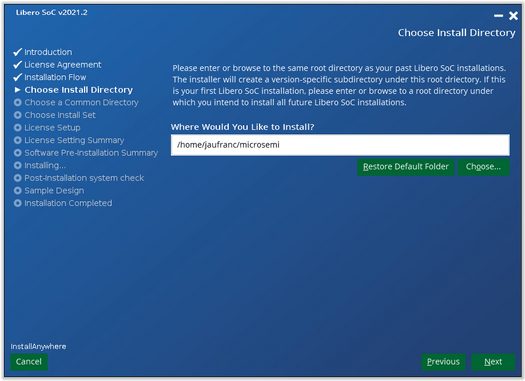 We’re also being asked for a common directory, and I type /home/jaufranc/microsemi/common. Next up is the license. 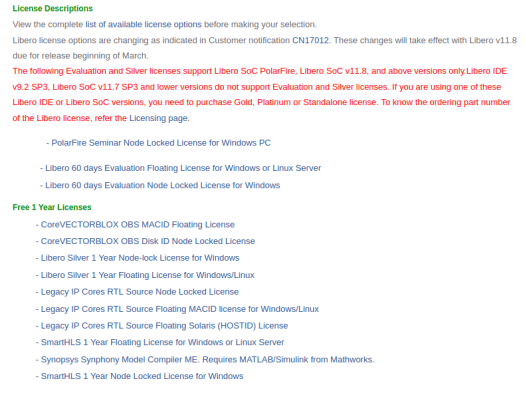 It’s a little confusing as there are a bunch of those, but considering I read I needed a Silver license for the board, and I’m running Linux, I went with a “Libero Silver 1 Year Floating License for Windows/Linux”. I was asked to enter the MAC address of the server, and then I got a confirm message: 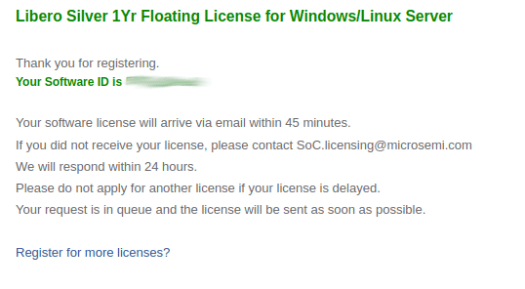 No need to wait for the license to arrive, we can carry on with the installation. 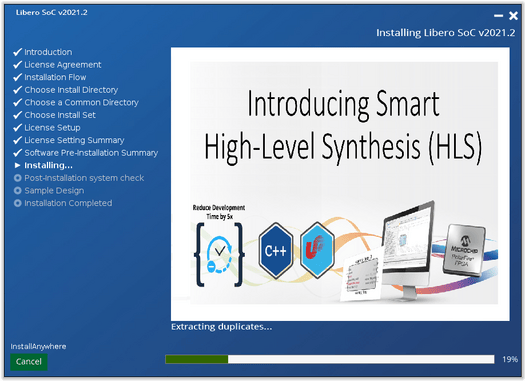 The software installation will already take a while (I think about one+ hour), and after it will check for the required packages, which will also take a while… 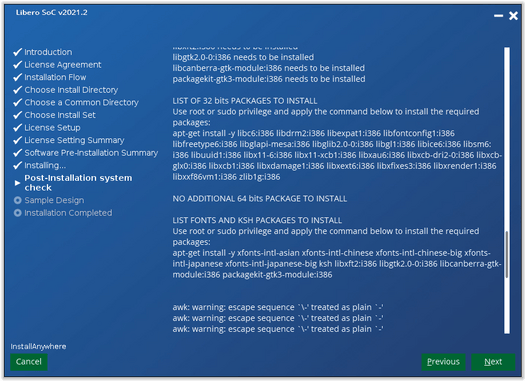 And I had to manually install some packages… Not sure why we have a graphical user interface, doing everything from the command line might be just as convenient…

and then fonts and ksh packages:

There’s no i386 package for packagekit-gtk3-module, so I just installed the 64-bit one: 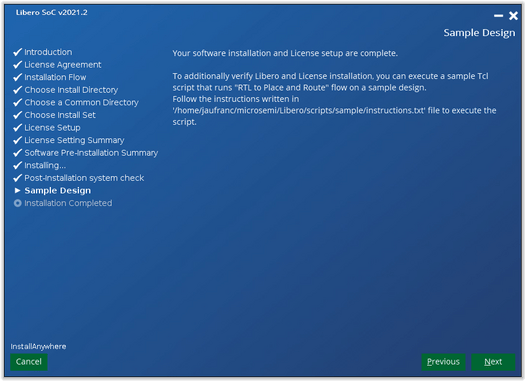 We have a link to some instructions to execute a sample scrip that may be good to try later on. 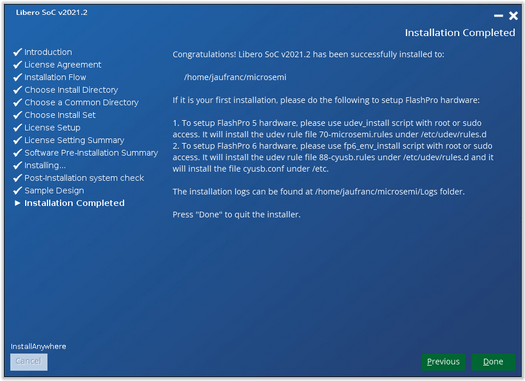 All good. I’ve also received a “Microsemi Libero Silver 1Yr Floating License for Windows/Linux Server License” in my email. I could not believe the step I had to go through:

In theory, I should be done, but running lmgrd command failed:

Those license daemons are apparently common and apply to Keil MDK as well, and there’s a solution on Arm website. We can check libraries used by the utility with ldd:

And there’s a missing library:

and we are advised to install lsb:

It did not work immediately, but a couple of minutes later, I could progress:

Nice! Another error. I tried to run the program as root, but it is not recommended either for security reasons, and it did not work either.  The solution is just to create the directory and make it writeable to the user.

I still did not work properly because I had launched lmgrd several times, and other instances were still running taking port 1702. So I killed all lmgrd processes, and gave it a final try which appeared to work. The log is long so I posted it to CNX Pastebin.

After high CPU usage for a couple of minutes, and then nothing. I was then told to open a ticket with Microchip support. The good news is that I got an answer pretty fast:

Identify and Modelsim ME Pro do not directly support the Ubuntu platform.

But obviously, it was not the answer I hoped for, and indeed looking at page 28 of the release notes, we can see the list of supported operating systems:

At this point, I noticed somebody posted instructions to install Libero SoC 2021.v1 on Ubuntu 20.04. I tried it, but it would not work for me either.

There are a few features not working on Ubuntu 18.04. I first thought about installing Ubuntu 18.04 in VirtualBox,  but the minimum requirements to use Libero SoC including having 16GB RAM, and my PC only has 16 GB RAM, so a virtual machine would have less than that. The next option would be to install Ubuntu 18.04 on a USB drive, but seeing some features are not supported, I decided to switch my current internal HDD with one with Windows 10 to keep things safe, and avoid wasting even more time.

I went with the Web install. 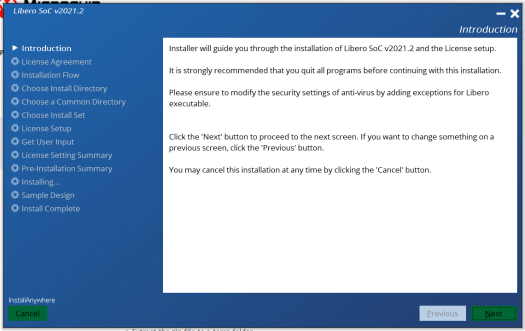 The procedure is basically the same as under Ubuntu, except we don’t need to manually install libraries, and I skipped the license applications since I already have one. It took little under two hours to complete. 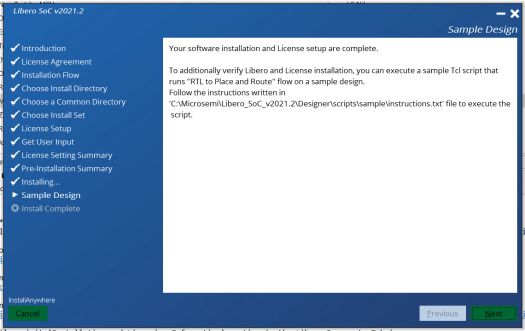 My Silver license is valid for both Linux and Windows, so I did not apply for another one, although a node-locked license should also be an option in Windows, and could be easier to set up. So let’s carry on with the floating license in Windows.

Again I had to save Licence.dat, and download the daemons for Windows. I saved everything in the C:\flexlm directory as per the instructions.

Since I’m using a server license I need localhost in Windows. Techwalla has the instructions, so I enabled the “Internet Information Services” in Turn Windows Features On and Off section of the Control Panel. While I had the documentation open I also edited the first four lines of License.dat with the server name (localhost) and the correct path to the daemon just like we did in Linux: 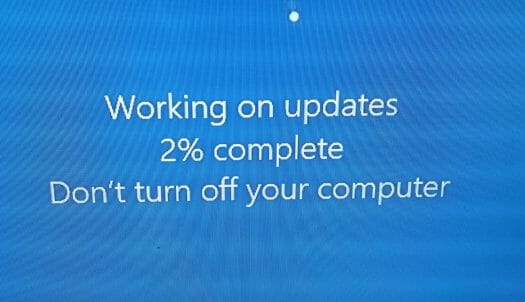 …and ran the following command to start the license manager:

I will start 5 additional terminals, one for each daemon part of the Flexera licensing system.

I can not see any obvious error messages, so I’ll try to start Libero SoC. 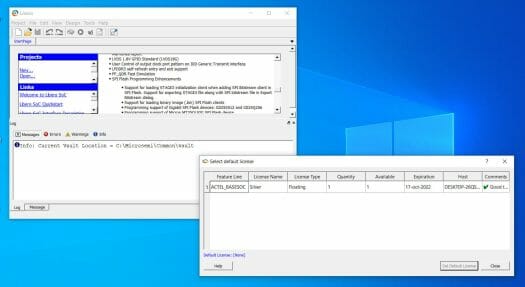 Oh my god! It looks like it’s working! I think I’m going to cry! 😉 I easily spent over 10 hours installing Libero SoC… Time for a celebratory drink! I think I’ll take a break for a while, as I have to study to find out how to actually use it, and I’ve got some other hardware needing some love, so I’ll try to actually synthesize a bitstream for the FPGA sometimes next month.

I’d really like to say that this is a unique experience that you’ve just lived through, but I can’t honestly say that as pretty much every commercial program with a license manager has been just like this going back to the early 90’s when I was a sysadmin. Nothing seems to have changed.

You have my condolences.

It’s the typical for most FPGA toolchains, though this is on the higher end of, “annoying,” compared to where Xilinx and Intel have brought their tools. It’s still GIGS of downloads, etc.

There was a RISC-V core design challenge in which I got a free Microsemi FPGA board to participate with. I ended up giving up when I had to try and install Libero SOC, so I never even started the challenge because of it.

Finally, I don’t think I’m going to go ahead with Libero SoC. Documentation is really poor, I’d have to read hundreds of pages to understand the flow of programming, and it would probably take me around 40 hours to come up with something that works.