Picovoice Cobra Voice Activity Detection (VAD) engine has just been publicly released with support for Raspberry Pi, BeagleBone, NVIDIA Jetson Nano, Linux 64-bit, macOS 64-bit, Windows 64-bit, Android, iOS, and web browsers that support WebAssembly. Support for other Cortex-M and Cortex-A based SoCs can also be made available but only to enterprise customers.

Picovoice already offered custom wake word detection with an easy and quick web-based training and offline voice recognition for Raspberry Pi, and even later ported their voice engine to Arduino. Cobra VAD is a new release, and, like other VADs, aims to detect the presence of a human voice within an audio stream.

Picovoice Cobra can be found on Github, but note this is not an open-source solution, and instead, libpv_cobra.so dynamic library is provided for various targets, together with header files and demos in C, Python, Rust, and WebAssembly, as well as demo apps for iOS and Android.

The easiest and fastest way to try it out is via the demo embedded in the announcement. Just click on the microphone, and then make some noise and/or talk to see how it performs.

Any noise that’s not audible speech should be filtered, even under noisy environments, of course within some limits.

The company also published a voice activity benchmark to compare it to other solutions like Google WebRTC VAD access through py-webrtcvad Python program. The chart below, provided by Picovoice, shows the receiver operating characteristic (ROC) curve of the WebRTC and Cobra engine with a Signal-To-Noise ratio of 0dB. 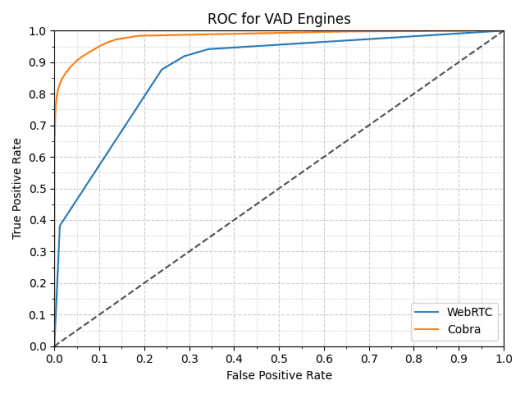 The chart is a little confusing, but the takeaway is that a larger area under the curve is better.

Is there any comparison with open source products?

Is the any working open source product like picovoice?

yes there are quite a few open source voice recogniction / assistants out there, but i haven’t gotten around to testing them, that’s why i asked.

maybe you can look at https://github.com/sipeed/Maix-Speech

Is there a VAD engine too? I call only see speech recognition and text-to-speech for now.

Who will spy better ?