Last summer we reported that BeagleV StarFive RISC-V SBC would not be manufactured, but all was not lost as StarFive would collaborate with Radxa to make a new single board computer based on their JH7100 dual-core 64-bit RISC-V processor.

But thanks to a report on Heise and extra photos acquired by CNX Software, we now have more details about the board that mostly comes with the same features as the BeagleV StarFive, but a completely different layout that brings all the main ports to one side of the board. 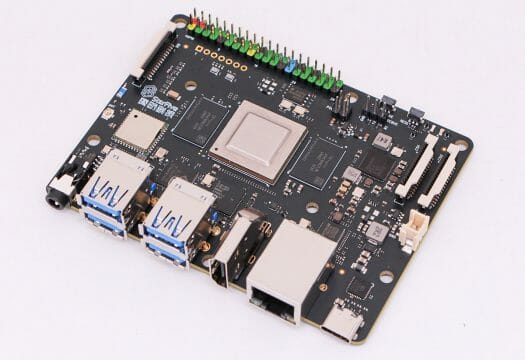 The specifications are mostly the same as for the BeagleV StarFive board, except the 4GB RAM is gone, and only 8GB RAM appears to be offered, and USB PD and Quick Charge are now supported, instead of just 5V/3A.

Heise first noticed the board in a Lightning Talk scheduled for the 8th of December at the RISC-V Summit in San Francisco, StarFive also published a product page with a photo and basic specs. information. Linux support is progressing well according to a changelog on a StarFive Linux Github repo: 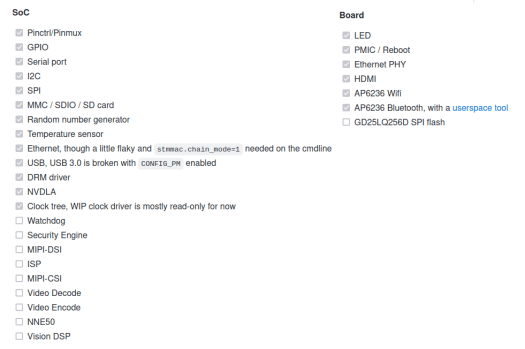 The key features work on the board with Ethernet, HDMI, WiFi and Bluetooth all implemented, but strangely not the SPI flash. There’s more work to be done for the SoC itself with MIPI interfaces, video encode/decode, and some AI/computer vision accelerators still needing to be implemented. The NVDLA accelerator already works though, and all low-speed I/Os like U2C, SPI, and GPIOs, as well as USB 3.0. The documentation for the processor is also available on Github, but was uploaded several months ago. The community can also access resources and a forum on rvspace.org.

There’s no price nor availability information for the VisionFive V1 SBC, but we should learn more in a couple of weeks with the official announcement. The board will not be suitable for everyone since it lacks a GPU for 3D graphics accelerator, but we’re also expecting the StarFive JH7110 in 2022 with four 64-bit RISC-V cores and an Imagination IMG BXE-4-32 GPU. [Update: The price will be $149 according to the presentation slides from RISC-V Summit, and the JH7110 board will be called VisionFive V2] 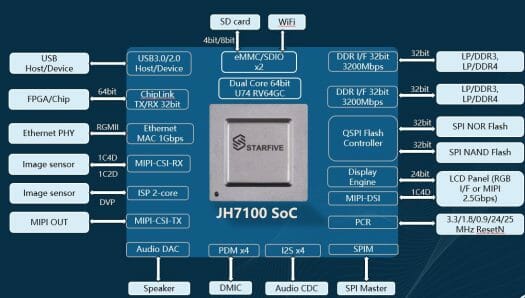 That’s basically the story they had for the BeagleV. And, no, it’s not a bad price. I was going to pay for the other…now, if they can ship, I’ll be interested in this.

I can’t find link with pre-order or where to buy this cool thing, can anyone point me to it?

AFAIK, it’s not available yet. You’ll probably be able to pre-order next month.

Linux OS developers may also get one for free, as they have a sponsorship program for 30 boards.

When, or more likely if, they fix Linux driver support – hopefully mainlining them – this will be a really good platform for edge AI. Also, having all external io on the same side of the board is a lot better than the old board.

What’s missing on driver support? If it’s the NVDLA, that’s got something already roughly there that just needs refining. Other stuff? Depends on the devices. It doesn’t help that none of these things are really in the wild and only part of the actual crowd that could do the driver work had it in hand.

Look at the picture from their GitHub. No audio or video, no ISP, no visual DSP nor NNE – the devices you’d be relying on using a platform like this

:edit: whoops I ask a question that was answered in article 😛 sorry!

I still think these boards are neat, though I have no need for it and just kickstarted another cool SBC that I WILL use (very different from this one.)

Very interested in RISC-V boards, but the lack of NVMe or SATA is a huge letdown for me.

Just for the record. The SPI flash, where early bootloader, ddr ram init, OpenSBI and u-boot is located works perfectly fine in u-boot. It’s just that noone has yet made the QSPI peripheral work properly from Linux yet.

Very interesting as a development board to experiment with atomics on RISC-V, finally! I might eventually register to buy one, the price is reasonable for the specs, especially if we count on the rarity of linux-compatible RISC-V SBCs at the moment.

I wanted to make one point of clarification, BeagleV is the BeagleBoard.org Foundation’s brand for RISC-V based boards and is not itself a specific board. I made a brief update yesterday that we will be launching two new boards under the BeagleV brand around the time of Embedded World 2022.

StarFive Vision V1 SBC showed up on Aliexpress, but for $179.
https://fave.co/31YjoqQ

Note that the sales opened on their site, and the specs are now significantly lower than they were:

But the price raised to $175: https://shop.allnetchina.cn/collections/starfive/products/starfive-visionfive-ai-single-board-computer

Thus it’s possible that the extra delays result from stability issues if it requires a fan for two cores at 1 GHz; even the horribly unstable espressobin doesn’t!

About the price it’s because only the starter kit is available now, the “board only” option is gone.
The delivery time is around 20th Jan 2022, so people should get theirs soon, and we may get some feedback by the end of the month.

Given that I never got a response after applying for a board (not even a negative one, which I would have perfectly understood), I don’t know whether they maintained their program of free boards for developers, so maybe a good part of the enthousiasts who were counting on this will not be much interested in buying a more expensive and less capable one. Anyway we’ll see.