CaribouLite RPi HAT is an open-source dual-channel software-defined radio (SDR) Raspberry Pi HAT – or rather uHAT – that works in the sub-GHz ISM range and optionally the 30 MHz – 6 GHz range for the full version.

Developed by Israel-based CaribouLabs, the micro HAT is equipped with a Lattice Semi ICE40LP1K FPGA, a Microchip AT86RF215 RF transceiver, two SMA antenna connectors, a Pmod expansion connector, and designed for any Raspberry Pi board with a 40-pin GPIO header. 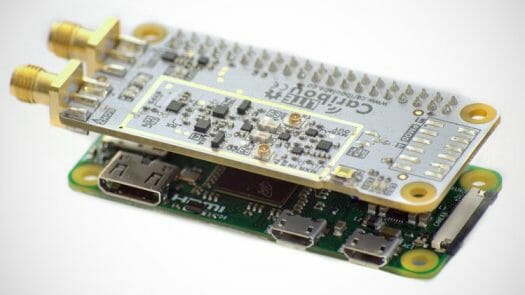 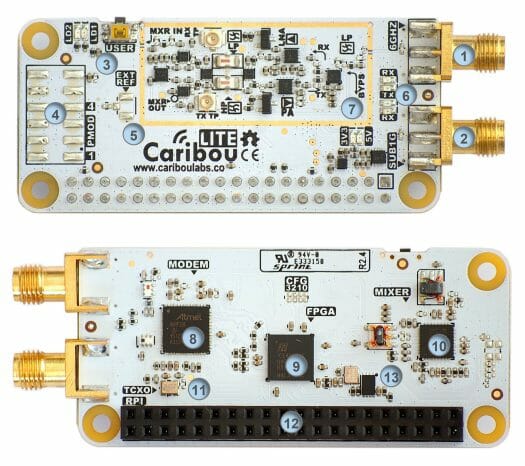 The HAT also includes an EEPROM with board information, device tree overlay, and drivers to be automatically recognized and configured by the Raspberry Pi board attached to it. The company also provides libcariboulite library, SoapySDR drivers, device-tree overlays, sample code, firmware, and hardware design files (PDF schematics only) on Github. The software enables the board to be used with SDR programs such as SDR-PlusPlus, GQRX, CubicSDR, GNU-Radio, and more.

The uHAT interfaces with the Raspberry Pi through the SMI (Secondary Memory Interface) of the Broadcom BCM2xxx processor which I don’t think I ever heard of, and CaribouLabs confirms the ” interface had not been fully investigated previously”. You can find more details on the Caribou-SMI API Driver page.

Can you use this to turn a PI in to a fully fledged wireless router?

Not really, it is more for experimenting with radio technology.

After all why should you use a $65 SDR instead of a usb or PCIe attached wifi card for a fraction of this price, if you just want a router. Not even going to the point of cheap routers needing neither a pi nor an SDR…

It would be more fun if it could do 40 MSPS so that it could decode 4G cellular.