We covered Xassette-Asterisk open source-hardware Allwinner D1s RISC-V Linux SBC last October. But it will most likely never be mass-manufactured since SdtElectronics, the designer, has no resources and time for production. So I thought I should give it a try, and I managed to get 10 boards manufactured and assembled.

Time for a little disclaimer. While the post is not sponsored in the sense I did not get paid for it, NextPCB agreed to cover all costs, aka sponsor, and manufacture ten boards. Today, I’ll report my experience manufacturing an open-source hardware board, but I had no time to check whether any of the boards worked.

Since I did not want to go through the whole process of ordering the PCB, purchasing the components, and soldering each board individually, I opted for NextPCB’s PCB manufacturing and assembly services. Here’s the detailed timeline:

So far, I was quite pleased with the way it was handled. It took around 6 weeks from order to delivery. Another person also built the board by himself and apparently did so in about two weeks.

So let’s see what we’ve got… 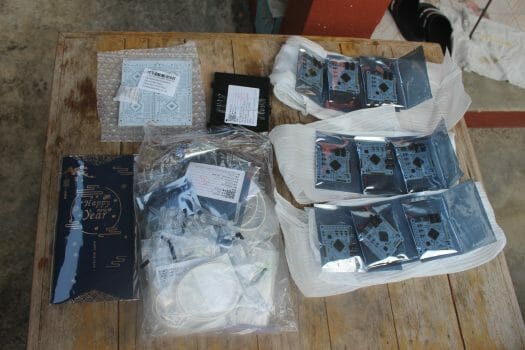 I only expected 9 assembled and one non-assembled board, but I got a bit more than expected including one bag with “garbage” as jokingly described by my girlfriend. That bag contains unused components. That’s because suppliers won’t just sell bags with 9 components (except for the processor see black box), and will ship the components in varying quantities of 10, 30, 40, or even 100 pieces as illustrated by the photo below. 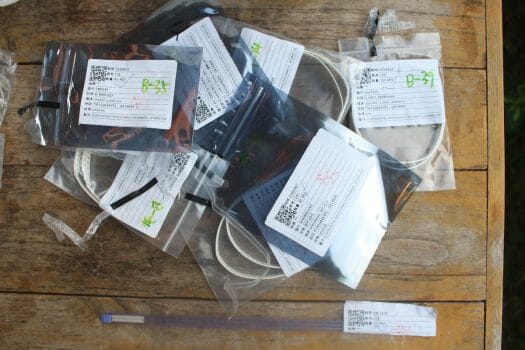 Time to have a look at the bare PCBs. I received two panels of four boards each. 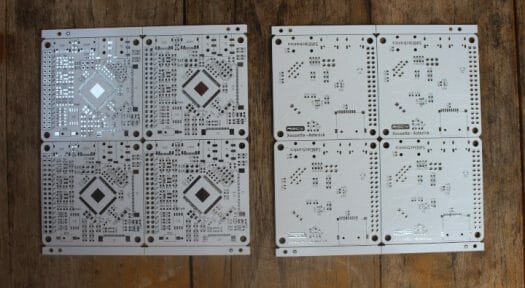 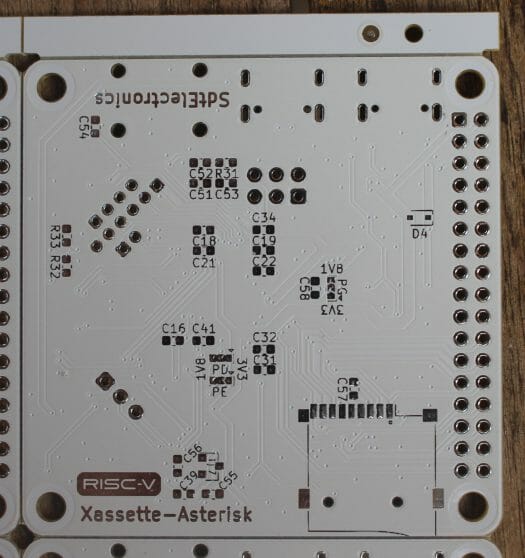 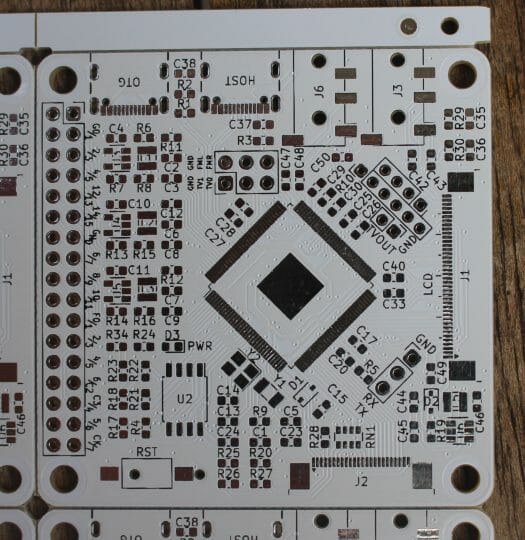 and now for the fully assembled board… 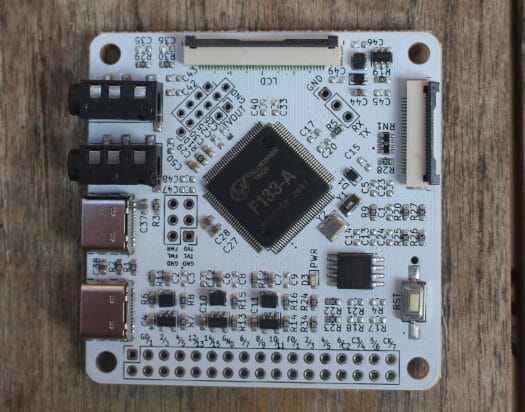 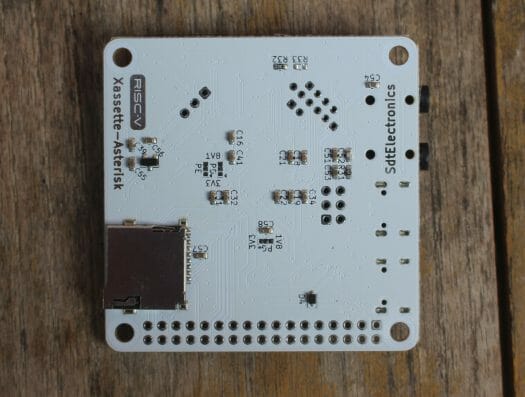 and in the sun… 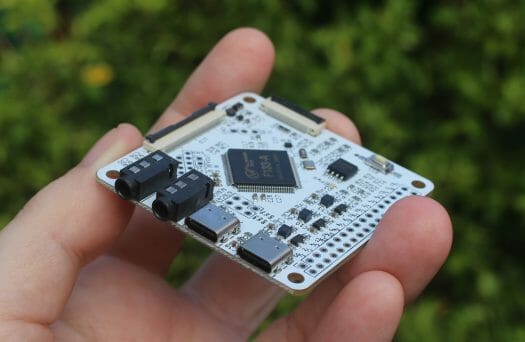 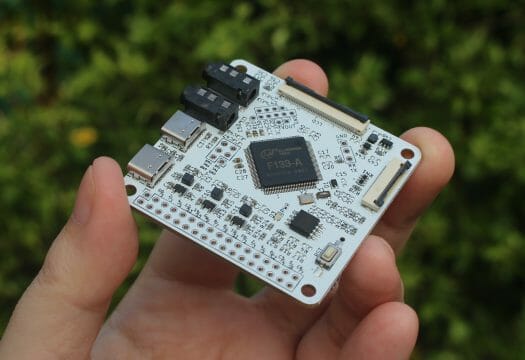 It all looks good to me except the capacitors that fell off during reflow soldering were not soldered manually, so I’d have some work to do before testing the board.

This will take a while since I won’t have access to a soldering iron for several weeks. If the boards don’t end up working, they make great Christmas tree ornaments!

If you’d just like to play with an Allwinner D1s or F133-A, I’d recommend waiting for the MangoPi MQ board that should start selling very soon. Update: all boards have been taken] and the two bare PCB panels. I’d just ask $7 for registered mail (count 2 to 4 weeks). Only one board or panel per person, and I’ll include some components bag as well (after keeping some capacitors for myself).

More than being about the AllWinner chip, I think this set of posts has been helpful in sharing with people an understanding of how difficult it is to get a board produced. Not everyone has been a part of such a process and doesn’t, therefore, appreciate the complexity of such a project. Little details can hang things up for weeks at a time. Communication back and forth can add several unexpected slips in the schedule. I’m ‘lucky’ in that I got exposed to this in my first job out of college, so later when I was involved with a few… Read more »

Author of this project here. I really appreciate this comprehensive guide on batch manufacturing, which I haven’t got resources to do it myself. May I link to this post in the README page in my project? By the way I have updated the hardware design to support WiFi modules, thus the image in the Github repository looks different from those in this page.

Of course, you can link back to this post. Thanks for your work and help for the small batch manufacturing.

Thanks for all insight into this open source knowledge support. Maybe you can give some words about how much time is to invest on this level of SBC hardware design (about 122 components/parts, with capacitors ~60 and resistors ~30) and SoC implementation on ~GHz (hi-speed demands for traces). Do you think about changing towards commercial design software or is open source a more appropriate way for world wide interaction and development support? Do you think that with drilling holes there’s risk of changing impedance/signal timings on one or the other point on the pcb?

That’s a lot of questions lol, but I am glad that someone has interest in the development of such projects. About the time investment, it will vary significantly according to the experience of the designer and the design itself. I am an amateur with limited time can be spent on these projects, and it took me a couple of weeks to start from design to finfish the soldering and test. D1s is a nice chip with in-package RAM and thoughtful arrangement of pins, thus it is rather simple for PCB layout. On the other hand, it is a new product… Read more »

Thanks again for Your explanations.
It also gives an idea what SBC’s with external ram, pcie, usb 3.x, networking on >=2.5Gbps and maybe 10 or more pcb layers are in terms of progress within electronics for computing devices (with customers mostly not being aware of).

Very cool. Thank you for going through the process in detail. One often reads “anyone can order custom PCB!” but rarely any detail on “yes, but exactly HOW…”

interesting to see how the manufacturer was very helpful with testing and identifying errors, but of course could not know much about your design goal or your own post manufacturing capabilities either, so not clear if they could catch every potential problem. Tell us how board works! 😀

Board in hana. Thank you, Jean-Luc!

Great! I’ve yet to try mine. By the way, some capacitors may not be needed. Check out line 5 in the BoM @ https://github.com/SdtElectronics/Xassette-Asterisk/files/7519220/T-9pcs-BOM.1.-Component.revised.xlsx

I completely forgot about that when I wrote the post.

That’s where I am now. I cataloged the ‘missing’ pieces and I’m trying to categorize them between ‘needed’ and ‘used to select things’. I’m still stuck on some of the voltage selection jumpers, but I think those are for interfaces I’m not using and I think I can safely leave them for now.

Board in São Paulo, Brazil

The board arrived this week to Spain.
Thanks Jean-Luc!!!

Good that you got it, but I did not expect it to take so long.

It is for sale on Aliexpress
https://fave.co/3rL3iLz

Lol! They copied the entire article and title from CNX Software. At least they kept the backlinks…

Thinking on, since they used your article, you should asked for a couple of boards to do a CNX Software site giveaway ! 🤔

I think I saw them copy other pages. Once I tried to issue a DMCA takedown to the Aliexpress page copying my full article, but Google says they can’t do it for third-party content which seems BS to me.

Only the copyright holder can ask for DCMA takedown. But you would have to ask Aliexpress to remove the page, it is not being hosted in Google. As for removing it from search, that probably needs a court order.

Yes, it was to remove it from Google Search. I can do it for other websites, but not Aliexpress for the following reason: We understand you’re concerned about this content, but we can’t remove content from third-party web pages. Google aggregates and organizes information published online. We don’t control the third-party content found in the pages you’ve sent. Even if we remove this content from our search results, other users will still be able to find it through other search engines, social media, or web pages containing links to the content. Google typically has no problem removing copied content from… Read more »