IkaScope WS200 WiFi oscilloscope fits in your hand like a pen, and works with devices running desktop or mobile operating systems, namely Windows, Linux, Mac OS X, Android, and iOS. I covered the tool last September, and IkaLogic – the French startup behind the project –  has now sent me a sample for review, as well as their ScanaQuad SQ50 4-channel logic analyzer and pattern generator.

Since I had never checked out the latter, I’ve decided to start the review with an unboxing post, before reporting my experience actually using the tools next month. 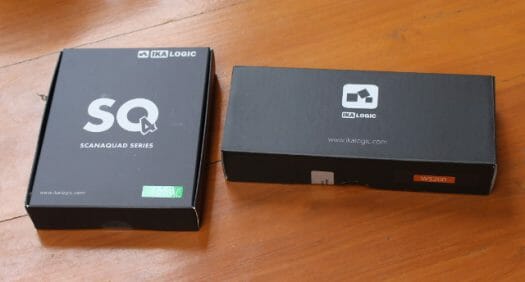 The oscilloscope comes with a ground clip, a micro USB to USB cable for charging, and a getting started guide with a QR code to download IkaScope program or app.

Once you open it, it really looks like an over-sized Stabilo highlighter. The only needed hardware connection needs is the ground clip, and micro USB port to charge the battery. The other side of the getting started guide lists some specifications, and…

… describes the behavior of LEDs found on either side of the micro USB port. There’s no obvious power button, since the tip of the probe is used for this purpose. Pressing the tip for one second will automatically turn it on, and the device will turn off after a while if there’s no measurements, This helps getting long battery life. 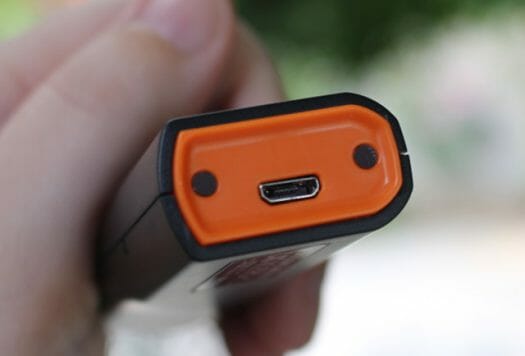 But more on that in the second part of the review.

The second package includes a tiny box – SQ50 – that can serve as a 4-channel logic analyzer or/and a pattern generator, a mini USB cable for power, and a cable with 5 probes including one for the ground.

The left side of the box comes with a mini USB port for power and communication with the host computer, and we can also see the power LED on the top of the case. 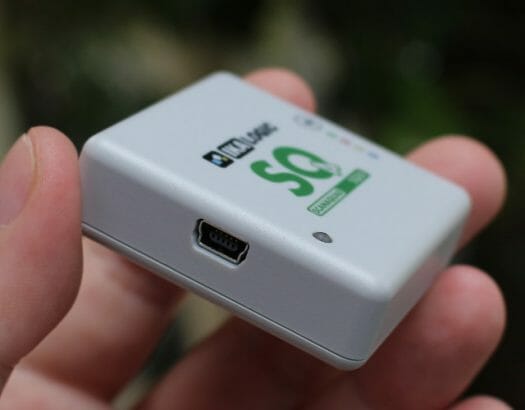 We have a 5-pin header to connect the probe on the other side. 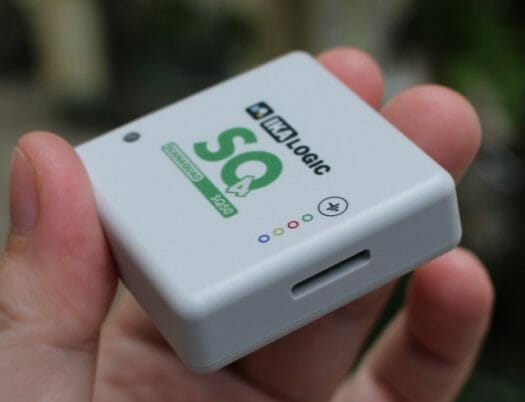 It may also be interesting to check out ScanaQuad SQ50 specifications:

The “50” is in the product name is clearly referencing the maximum sampling rate, and the company also have other models from 25 MHz to 200 MHz with either less features, or more with differential input pairs, open drain output, adjustable input resistant, and protection up to +/- 35V. The devices can be controlled with ScanaStudio program for Windows, Linux or Mac OS X. No mobile version. Protocol decoders are written in JavaScript, and can be found on Github.

ScanaQuad SQ50 is very easy to open with four screws on the bottom of the enclosure, so I went ahead to checkout the ICs used in the design.

We have four of them:

Maybe this information would be useful to people wanting to try out Sigrok, or other alternative software.

IkaScope WS200 oscilloscope sells for 299 Euros exc. VAT, while ScanaQuad SQ50 goes for 89 Euros exc. VAT, and the company also offer other models up to SQ200 for 149 Euros. As a side note, the company is also doing a survey for users’ of logic analyzers and/or oscilloscopes, so if you have 10 to 15 minutes to spare you may consider participating.