Wiretrustee carrier board for Raspberry Pi CM4 was unveiled about one year ago with four SATA connectors to help people build their own 4-bay NAS. Unfortunately, the company decided to discontinue the project due to the semiconductors market situation.

The good news is the board is now open-source hardware with all resources shared publicly including the Allegro schematics and PCB layout, Gerber files, 3D models for the heatsink, and case designs for 2.5-inch or 3.5-inch drives. All files are available under “CERN Open Hardware Licence Version 2 – Permissive”. 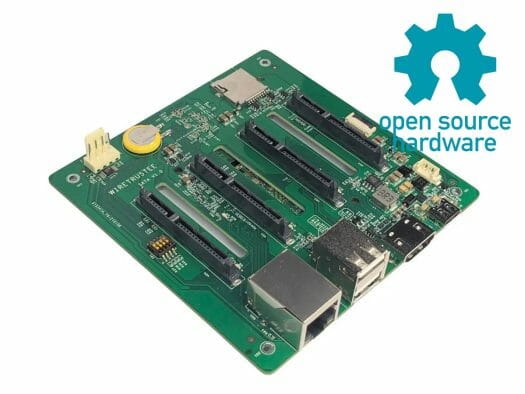 Here’s a quick reminder about the Wiretrustee board specifications:

While in theory, you could build your own, the project was phased out because of supply issues, I’d assume mostly because of the lack of supply for Raspberry Pi CM4 modules, but possibly although because of Marvell 88SE9215 (TBC), meaning the board might have to be modified with a new PCIe to SATA chip unless maybe you plan to manufacture the board 2023… There are pin-to-pin alternatives to Raspberry Pi CM4 like Radxa CM3 or Pine64 SoQuartz, but I don’t think the software is there just yet.

[Update: I got confirm about the Marvell chip shortage:

In Jan 2021, when we were building the first prototype, 88SE9215 was around $8 a piece. In April, when I started CrowdSupply campaign prep and calculation my supplier reported it was ~$50-$60 a piece.

As a side note, Wiretrustee is still operating but is focusing on a completely different project: an open-source peer-to-peer Wireguard-based VPN project designed to “make it easy to create secure private networks for your organization or home”. If interested, you’ll also find it on Github.

That pesky parts shortness, killing everything…

Whatever, we will survive.

I remember about 18 to 20 years ago when UMTS phones sucked all the market up, even caps market was dried up. But mostly we could just change from epcos to samsung etc. Nothing similar as compared to nowadays.