We previously noted it was possible to build a Raspberry Pi CM4 NAS using Wiretrustee carrier board with a built-in Marvell 88SE9215 PCIe to SATA controller and four SATA connectors.

But Mebs just created his own Raspberry Pi Compute Module 4 four-bay NAS with his own carrier board equipped with a PCIe socket used to insert a PCIe SATA card, as well as a neat 3D printed enclosure that took 6 days to print. 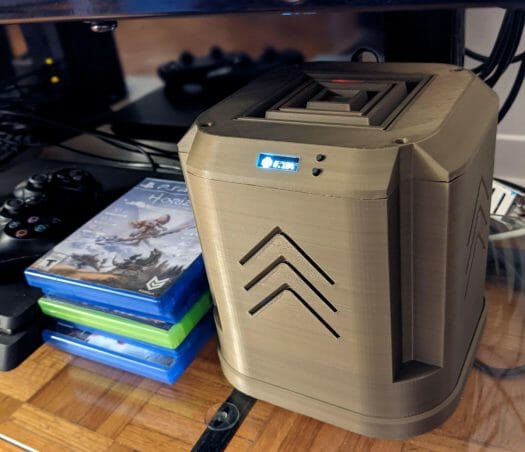 This carrier board design is actually derived from the official Raspberry Pi CM4 IO board with only the interfaces needed for the NAS to make it smaller and fit within the width of a standard 3.5″ hard drive. It was also made as simple as possible because it was Mebs’ first PCB design.

This leaves the board with Gigabit Ethernet, one HDMI port, a USB 2.0 port, the PCIe 2.0 socket, as well as some headers for power (board and SATA), a small I2C OLED display, temperature sensor, GPIOs, and fan control. 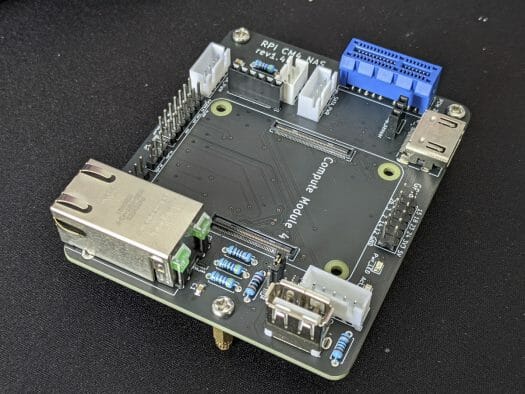 Details about the carrier board and 3D printed case can be found on Github, but I could not find detailed assembly instructions for the complete NAS. But since photos were shared we can see the Raspberry Pi Compute Module 4 plugged into the RPI CM4 NAS carrier board, a PCIe card with four SATA ports, a fan, and how the drives are placed on the sides of the enclosure. 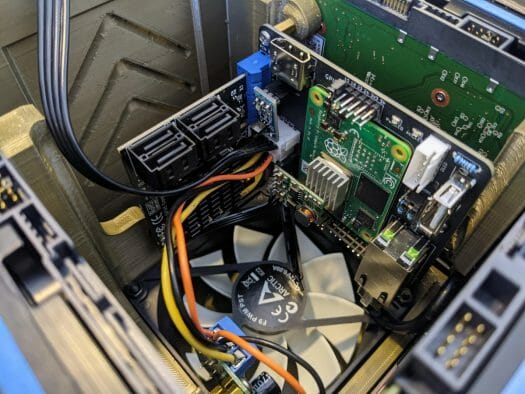 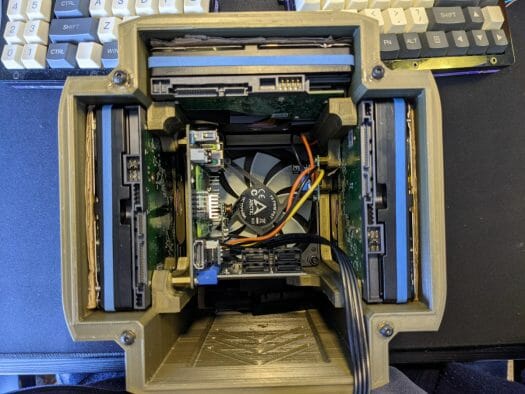 The unit shown above with three hard drives installed is said to draw around 24W under full load and under 6W at idle, while performance is around  110MB/s sequential read and write. However, he noticed occasional dips down to 15MB/s for a second or two during sustained operation and noted software optimization may be possible.

You’ll find a few more details and photos in the Reddit thread where Mebs announced the project’s completion. There does not appear to be any plan to sell the board or the full kit NAS, so that’s a project you’d have to complete yourself from the soldering of components in the board, 3D printing of the enclosure, and software installation.

Is that cardboard, packing the hard drives in the case, in the photographs ?

Yes, it’s what it looks like. That makes it even more “DIY” 🙂

And just imagine, what it does to heat dissipation…

The cardboard is there in a try to improve heat dissipation:

shouldbebabysitting – 3 days ago
Amazing design.
Why the cardboard? Wouldn’t air coming in on all sides help the drive temps?

mebs – 3 days ago
The cardboard is actually cut in a U shape. It keeps a gap between the drives and the vents for airflow and seals the top without obstructing the vents so that only fresh air will come in from the sides, without recycling air from inside.
It doesn’t show, but the empty bay is also sealed with cardboard on the bottom so all the air flows through the used bays.

I understand the desire for creativity and innovation and the stylistic choice of a “quad” layout is probably functional enough but I question it’s space efficiency.

I’ve yet to see a single “commercial effort with as good an airflow as this NAS does.

That being said if QNAP or Synology want to prove me wrong they can take my money.

Especially if they can make such a NAS with sound and vibration isolation/proofing equal to a decent PC case.

I get that they are trying to churn out a cheap, small product but I am tempted to mod a decent PC case just to get the same level of quality, airflow and sound/vibration isolation.

> as good an airflow as this NAS

And what is the purpose of ‘good airflow’ with such a NAS thingy? I would be much much more concerned about vibrations than HDD temperatures to be honest. And that’s one of the reasons why I prefer an old PC case one gets for free at every local scrap yard over a newly 3D printed pile of plastic waste. It’s a NAS and the N plus the A (network attached) allows the thing to be hidden anyway…