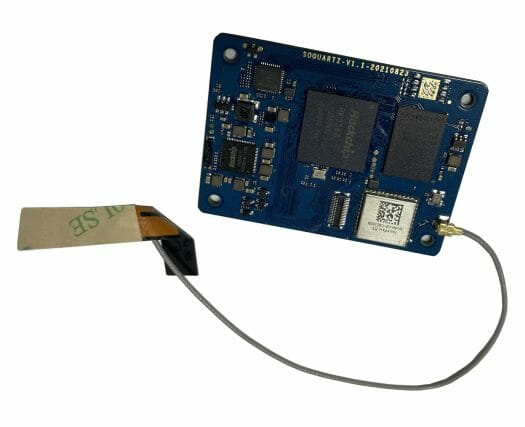 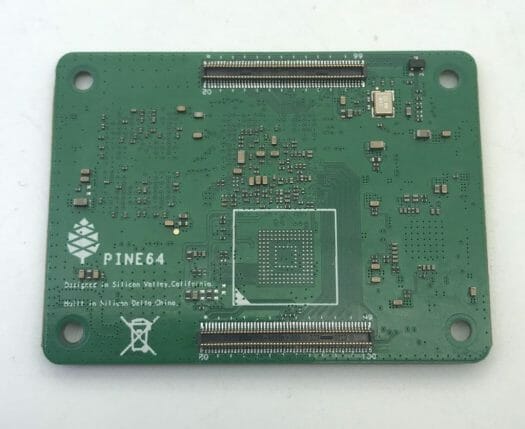 The module currently supports Android 11 and a Linux 4.19 BSP with download links and partial hardware specs listed on the wiki. There’s also a SOQuartz Model-A Baseboard, but it does not seem available at this time, so you’d have to rely on carrier board for the Raspberry Pi CM4 to get started. Note that software development is progress as Pine64 states:

The SOQuartz Compute Module software is still in an early development stage, and therefore only suitable for developers and advanced users wishing to contribute to software development. Both mainline and Rockchip’s BSP fork of Linux have already been booted on the platform and development is proceeding quickly, but it will be months before end-users and industry partners can reliably deploy it.

The advantages of SOQuartz over RPi CM4 Compute Module are the presence of an AI accelerator, optional 128Mbit SPI flash onboard, flexibility for the eMMC flash (module or soldered on), and support for SATA that should be multiplex with the PCIe 2.1 interface assuming they used the Multi-PHY2 interface from the processor. However, the Raspberry Pi Compute Module 4 has two HDMI interfaces, and the RK3566 module should only have one with the pins remaining unused. SOQuartz does not come with an extra 100-pin board-to-board connector provided on the Radxa CM4 module to benefit from the extra interfaces made available by the Rockchip processor.

Pine64 says SOQuartz will be software compatible with Quartz64 single board computers meaning support for Linux distributions and Android. It’s still early and a lot of work needs to be done. In theory, the module should be a drop-in replacement into Raspberry Pi CM4 carrier boards, but practice may get in the way for some of the boards, and incompatibilities are not impossible.

Update: The post was initially published on the 15th of June 2021, and updated on the 8th of November with SOQuartz becoming available to developers

What is the point for this ?
it is slower and more expensive
So why?
NPUs looks really slow 🙁
why SATA ? whey you can have NVM over pcie

I am still looking for latest rocking beast 🙂

For one, RK has support for encryption, which the Pi doesn’t.
Not everyone needs the computational power of the Pi.
SATA = lower power than NVMe and NVMe isn’t likely to be bootable on either board, whereas SATA would be.
Just because you’re a Pi fanboi doesn’t make this product bad or irrelevant, it all comes down to what the end product is supposed to be.

the biggest point is it has more process efficiency under passive cooling solution/no cooling than pi4, while pi4 NEEDS a dedicate active cooling solution in order to utilize all of its performance of 4*A72 while this can utilize most of the power with a proper-designed passive heat sink block

“NVMe isn’t likely to be bootable on either board, whereas SATA would be.” isn’t correct.

The Pi CM4 already has Beta support for boot from NVMe SSD over PCI-e :

Pine has not announced a price for the module. The listed price is for the full SBC. I would not be surprised if the module were cheaper.

Performance per watt this is far superior than cm4 and have AES!!! It’s just an obvious better and more modern SoC than cm4.

This is a great move, excited to see some more info as they progress.

do you have any idea when raspberry pi cm4s will be back in stock ? 🙁

Not very important but I can’t spot the SPI flash on this board. But as others said, it can provide a low-power option for use cases not requiring the performance of A72, and possibly not having the room for a heat sink.

Yes, me neither, but since they said it would have the same memory and storage options as Quartz64, I thought may it was just not added to the prototype/first revision of the board.

I wonder how it will interact with the cluster board.

There is an advantage that you don’t mention in this article. However, you do mention it in the Radxa article. It bears repeating.

The RockChip has both the crypto instructions and a crypto module.
None of the Raspberry Pi boards have any crypto hardware. This makes an enormous difference with TLS operations.