BigTreeTech BTT SKR Pico V1.0 is a 3D printer controller board based on Raspberry Pi RP2040 MCU, compatible with Raspberry Pi Linux SBC’s, and specially designed for the compact Voron 0 3D printer, but also working with other models.

The board comes with four TMC2209 motor drivers covered by a heatsink for cooling, as well as interfaces for temperature sensors, and a USB Type-C port to connect to the host computer, usually a Raspberry Pi board running Linux. 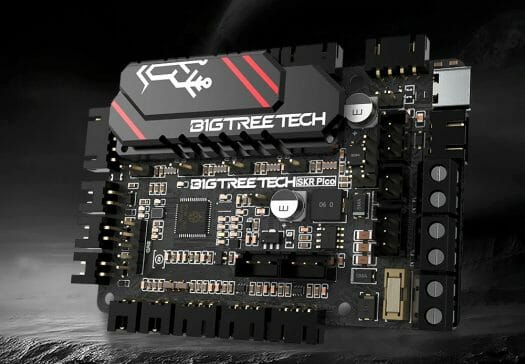 The board is optionally offered as an “Armored” version with the protective top cover and can be mounted to a Raspberry Pi 4 or Raspberry Pi Zero 2 W or earlier models in order to run Klipper or Octoprint. It’s been designed as a more compact replacement for the earlier BTT SKR Octopus board.

The Voron 0 (now Voron 0.1) is an open-source hardware 3D printer that you can build yourself, or purchase for about $400 on Aliexpress or other websites.

BigTreeTech BTT SKR Pico V1.0 is available for $35.68 USD on BIQU website, while the now out-of-stock Armored version is usually sold for $39.98 USD.

Not the best soc for the job, but its cheap and might get good support, lets hope it pushes all those old 8bit controllers out.

The 8 bit is effectively not used. The performance is pretty good, better than most of used alternatives https://www.klipper3d.org/Benchmarks.html#command-dispatch-benchmark

As much as I’ve been critical of this chip in the past, I have to completely disagree with you. This is one of the applications where this chip is ideal. Keep in mind it’s meant to run only Klipper, you have a dual core M0 so one side can handle communications and housekeeping while the other can use the pin control state machines to handle the low level/real time stepper controls. This is probably the best chip out there to make a printer controller with–if you’re willing to move to Klipper. But, I do agree that I hope the 8… Read more »

Sadly, thinking about it, the chip shortage has probably helped the older chips because they’re made on much older processes which *aren’t* seeing the high demand that the more modern ones are. Then again, it’s not like any of the 32 bit chips are using ‘modern’ processes. Isn’t the RPI2040 pretty much using the most modern process (used by commercial SoCs) and that’s only 40nm. I think I did some research a while back looking at what process a lot of Cortex-M chips were made on and it ranged from 195nm to 75nm. Those 75nm chips were running at hundreds… Read more »

I’m pretty sure I read somewhere that some were running it at 200+ MHz.

yes that was it 🙂

You can overclock anything, but they only spec 133 and if you go beyond that in a product or a project, you take the risk if it misperforms. If they were confident that it would work that fast under all edge cases, they would put it in the datasheet.

Yes I 100% agree, but it might also be a matter of market target: maybe they want to keep prices low and not start to increase the cost of tests just to validate higher frequencies than needed for their target. It might come in the future if they figure that plenty of users overclock them. For personal projects it’s perfectly fine. For example the ATMEGA328 on my GRBL board runs at 24 MHz because that allows me to run at 230kbps and maintain a nice ratio for the laser’s PWM frequency, compared to the original 16 MHz. But that’s only… Read more »

A few months ago, seeing the high frequency this chip supports made me wonder if it would be nice to try to make a small board with it that would be compatible with the arduino-nano format and install GRBL on it for my laser engraver. I already have other stuff to deal with, but that would definitely be a much welcome improvement!

That is exactly what it looks like. Weird thing to wake up to.

Then you’re going to like this! It has an RGB LED on board! And a header next to it for ‘smart’ LEDs! Bling that baby up!

When you put it that way, RP2040 really does resemble TI PRU.

Marlin Firmware developers are also working on adding support for this and RP2040, see -> https://github.com/MarlinFirmware/Marlin/issues/20877

Other than for SaG, that makes no sense. The pico is a poor choice for a general purpose printer controller using that software framework. It’s got too little I/O for anything but a small printer. Maybe if they had a RP2064 or 2080, it would make some sense, but–as much as I love Marlin–it really looks like the writing is on the wall. Klipper (or similar) is the future.

Or you could use reprap firmware, it’s like klipper and Marlin had a baby.

BTT SKR Pico V1.0 got motor interface for X, Y, Z1, Z2, and E which with Marlin Firmware should at least be enough for a majority of Cartesian style FDM 3D printers on that market.

The only real limitation for Marlin is will need to use a display with a serial interface if going to use BTT SKR Pico V1.0 as stand-alone with Marlin Firmware without a Raspberry Pi.

Keep in mind the two Z output are just in parallel, there is *one* Z driver.

According to the BIQU web page, the Pico communicatees with the stepper drivers via their UART interfaces. That probably saves on I/O pins.

That’s not how the step/dir signals are sent, though. The UART communication is to set and measure parameters of the stepper motor controller–current, etc.

RPI 2040!!! Should have went with an ESP32, far superior, and you would have gained Wi-Fi connectivity. It amazes me how many printers dont have WiFi. Like I want to keep transferring files on a uSD card all the time. Just silly.