We previously wrote it was possible to create a Raspberry Pi RP2040 board with HDMI using DVI and programmable IOs to output video up to 640×480 at 60 Hz with the microcontroller’s Cortex-M0+ cores clocked at 252 MHz.

At the time, we also noted Olimex was working on such a board with RP2040-PICO-PC designed to create a small Raspberry Pi RP2040 computer with HDMI/DVI video output.  The Bulgarian company has now manufactured the first prototype, but due to supply issues with the Raspberry Pi Pico board, they also designed their own RP2040-PICO module since they’ve got a reel of Raspberry Pi RP2040 microcontrollers. 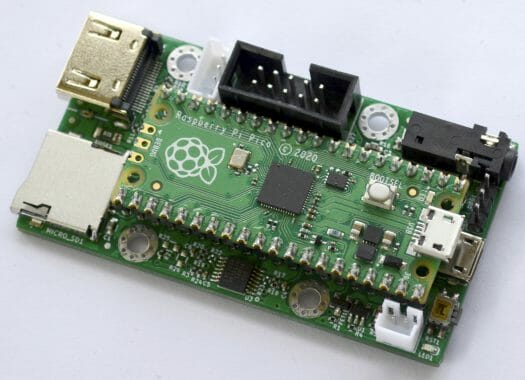 You should indeed be able to use it as a small computer with HDMI video output, speakers connected to the 3.5mm audio jack, storage using the 2MB SPI flash and/or a MicroSD card, as well as keyboard and mouse via the micro USB 1.1 port on the Raspberry Pi Pico board.

Obviously, it won’t be able to run a typical operating system like Linux, but it might be possible to make a simple retro-gaming console, a basic digital signage player, or program directly on Raspberry Pi Pico without the need for a separate computer.

The board still comes with the same Raspberry Pi RP2040 microcontroller,  2MP SPI flash, I/O headers, and Micro USB connector as found on the Pico board to make it a drop-in replacement. 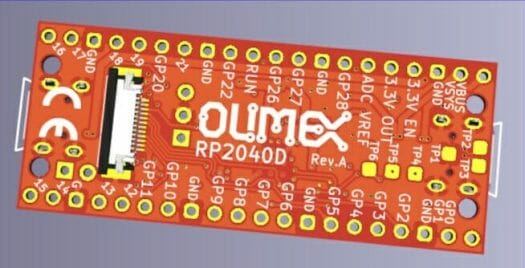 There will be three versions of RP2040-Py board/module:

The product is expected to start in a few weeks, so both RP2040-PICO-PC and RP2040-Py should be up for sale in early May.

You may find a few more details in the announcement on Olimex blog.

Why would anyone want to use HDMI monitor to display 640×480 with such a microcontroller? There are plenty of cheap SPI TFT displays 480×320 – 800×600 which are far better suited for it…
I understand it is interesting to learn it can be done and how to do it, but …

Any suggestions for such displays? I’m about to start a hobby project to create a dashboard for a rally car. All SPI/i2c screens I find online are low resolution. Idea is to use an uC to read values from CAN bus and just display them, because I dont want a linux system taking 30 seconds to boot…

Here are some 800×480 and 1024×600
For application like yours I would recommend excelent FTDI EVE based 5″ displays with capacitive or resistive touch.

For ~20 US$ you can get a small Linux based board like this one or this one with 5″ (or 7″) display. It boots in 0.5 – 2s depending on configuration.
You can even use it as a smart SPI display board, but you must write your own spi interface driver. I’m often using this approach.

Thanks! it looks like the linux option is something to consider. Did you try that option? Im also worried about the brighness of the screen, some cheap options for the rpi are like 350 cd/m2 and in a car on a sunny day thats not usable unfortunately. Anyway I will order the lychee one just to test it.

Yes I’ve tried with MangoPi-R3 and it works great.For display you should select the IPS type, there are some quite bright displays.The other option is to use ePaper display, parallel type EPDs have quite fast refresh rates (~0.1 – 0.4 s) and are ideal dor daylight use. Of course they are BW (16 shades of gray), but it looks great. There are also models with frontlight (for night visibility) and touch.

FWIW there seems to be a form factor called “86 boards” which is 86mm x 86mm displays with a linux machine on the back.

They should be dual core cortex a7 + esp32 + a 4 inch touch panel LCD for $25. Assuming they actually turn up and they don’t suddenly change the price they look like really good value for money.

Thanks for your answer! 🙂

Problem I see with all these cheap linux boards is most of them rely on cheap Allwinner processors: fc100/fc200/v3 which dont seem to have a great support, neither they seem to be on mainline kernel, etc. It looks like olimex did a new olinuxino now based on the v3 so some “better” support might be expected. Any board using a “well” supported SoC and known to be booting on a reasonable time? (ie: less than 5 secs…).

Linux can be made to boot in a few seconds on most platforms. It’s not dependent on the processor. It may just require some work.

Those things are based on the SSD201/SSD202D which I’m slowly trying to mainline.. 5.12 runs with a lot of stuff working. Biggest missing part is support for the display hardware.

The Allwinner v3 based chips should work pretty well in mainline from what I remember.

I would be glad to colaborate, how about a yocto port? 😀 I have some experience on it. Is this your port? http://linux-chenxing.org/?

>I would be glad to colaborate, how about a yocto port?

That would be great.

>Is this your port? http://linux-chenxing.org/?

Seems that the original idea stemmed from retro-computing, where such resolutions actually make sense:
https://twitter.com/Olimex/status/1364219636183486468?s=20

Granted, it is a bit of a niche product, but I guess Olimex didn’t see any value in creating yet another breakout board for the RPi-Pico (there are many options availalbe now).

Why are so many fascinated by the RP2040? The ESP32 is cheaper, faster, and has Wifi & BT. What is the big deal here.

I think that “makers” are exploring the capabilities of PIO (Programmed Input Output) pins for future use in Raspberry Pi 5, RISC-V, other CPUs and microcontrollers. We are slowly approaching FPGA flexibility if you also consider the SerDes lanes (USB, SATA, PciE) multiplexed in RK3568. It is all about maximum flexibility at pin level. A pin can be anything: SPI, I2C, HDMI, I2S, USB, SATA, PCI, ADC, DAC, PWM, UART, CAN, etc. One SoC to rule them all.

Something similar to the PIO block can be found in some other microcontrollers, and some also have an embedded FPGA (eFPGA). I think we just live in a world where marketing is just as important as technical prowess. Some people may also think using a Raspberry Pi board will be easier to use even though MicroPython & Arduino are already well-supported by other microcontrollers.