We’ve already seen Raspberry Pi RP2040 getting WiFi connectivity with boards like Pico Wireless Pack, Wio RP2040 mini, and Arduino Nano RP2040 Connect in ways that do not always make technical and commercial sense as in many cases, the WiFi microcontroller (e.g. ESP32) is more powerful than the Raspberry Pi microcontroller. 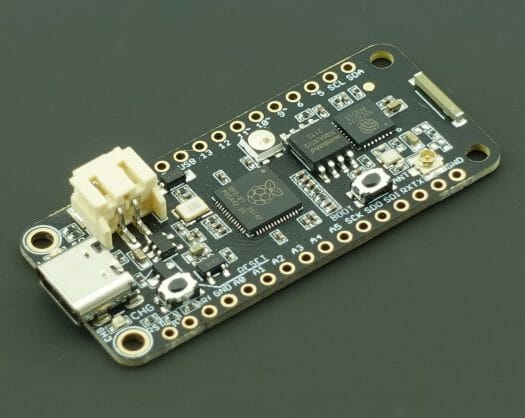 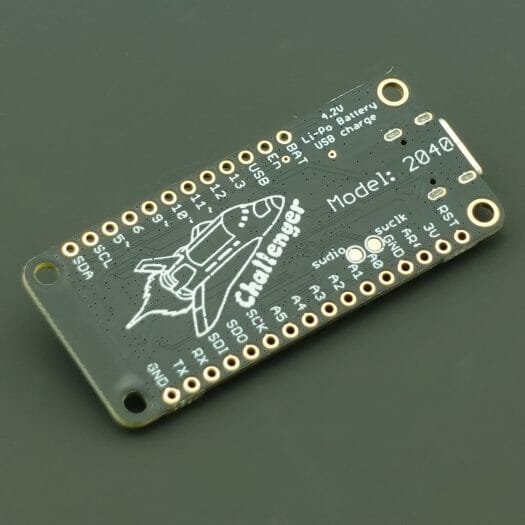 The Challenger 2040 WiFi  board can be programmed with Arduino, Micropython, or CircuitPythong, but interestingly the company does not recommend the official Arduino Core mbed 2.0 from Arduino, but instead, Raspberry Pi Pico Arduino core developed and maintained by Earle F. Philhower on Github. For WiFi support, Invector Labs recommends the WiFiEspAT library which can be found in the Arduino IDE. Documentation is somewhat limited at this time, but more details may eventually be added to the product page.

The Challenger 2040 WiFi board is sold for $14.95 on Tindie or about two dollars more than the yet-to-be-available Wio RP2040 mini, but that’s still pretty good, especially considering it supports LiPo battery charging.

Lacks an RF shield around the WiFi chip. This is going to be problematic for use near USB 3 devices, and it’s going to contribute to 2.4GHz noise floor in your environment. I would avoid this. I hope FCC starts coming down on these sellers.

What an odd choice for a product line name. The backside silkscreen leaves no doubt about the reference:

I can only imagine which historic disaster they will name their next product line after.

I agree. This reference is, at least as represented in this article, completely without context. This puts it pretty firmly within the realm of being completely tasteless and tactless.

I am also completely bewildered by the decision to use a wifi microcontroller alongside the rp2040 – I cannot think of a single use-case that would not be better served by an ESP32 or ESP8266.
If anyone is aware of such a thing, please let me know.

If RP2040 consumes less than ESP8266/ESP32 (I haven’t checked), it would be possible to basically turn off ESP8285 when WiFi is not in use in order to have longer battery life, while still being able to handle other tasks like I/Os. There are also extra ADC pins on RP2040, and probably other small differences like PIO support that may make it more suitable for specific projects.

Its sad that your first thoughts was to think the naming was a bad thing. How about honor the people involved with that space shuttle?

I simply do not understand the hype around RP2040. It is not a particularly well designed, low power and/or high performance MCU. It really does not excel in anything; in fact, it is inferior to the MCUs from other major vendors like ST and Microchip by orders of magnitude. Now, RP2040 + ESP WiFi SoC for almost $15? Why would anyone ever choose this combo over single chip solutions like ESP8266 and ESP32 that are significantly cheaper and easier to develop with? IMO, this is just another attempt at “hey RP2040 is (for some unknown reason) awesome!” It is just… Read more »

That’s the principle of hype. Since others are doing it, every major player in the market needs to have their own RP2040 to look respectable, just like any software vendor must absolutely place “AI” anywhere or needed to mention having a cloud 15 years ago. I think that one perceptible strength of the RP2040 is its operating frequency. While most other similar class MCUs run around 50 MHz, this one runs at 133 and was quickly advertised as being highly overclockable. This likely makes people feel like it sort of bridges a gap between MCUs and CPUs. And do not… Read more »

The real comparable for the RP2040 isn’t the typical MCU with flash, but flashless chips from Espressif, NXP, and similar. Without flash, the chip can be smaller and faster. Also, for certain applications, it’s programmable I/O could be an advantage.

I’m not super excited, but next time I need a small Arduino controller, I might pickup the Seeeduino Xiao with RP2040.