There are already plenty of IoT development platforms, but here’s another one with Golioth that relies on a Zephyr SDK, “first-tier” support for Nordic Semiconductor nRF9160 (cellular) and Espressif Systems ESP32-C3 (WiFi), as well as a QEMU-based simulator for easy testing.

The use of an open-source Zephyr SDK even enables them to support over 100+ hardware components, and the company, also called Golioth, says their platform scales from one device for evaluation to one million devices during deployment, thanks notably to a free Dev Tier account to get started at no cost. 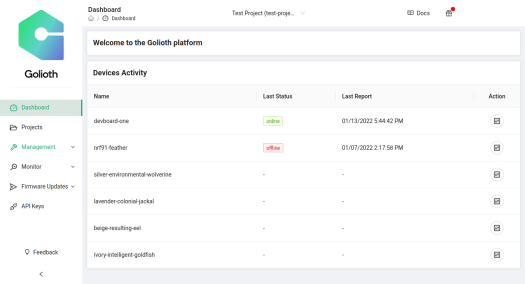 Some of the other highlights of Golioth include:

The free Dev Tier allows developers to create one project with up to 50 devices with 10 MB of LightDB storage, 7-day retention of LightDB Stream & Logs, up to 4MB artifact, up to one message per minute, 100 tags, 100 releases, 5 API keys and 3 credentials per device.

If you wonder why we’d need yet another IoT platform, Chris Gammell, a hardware developer and podcaster (The Amp Hour), who joined Golioth a few months ago told CNX Software that:

…Golioth made it easier for a hardware developer like me to actually connect things to the internet. This is all without needing to know how to use something like AWS IoT or Azure IoT or the other cloud services that are out there. Plus it doesn’t have lock in at the hardware level, another common IoT workaround.

He also shot a video showing Golioth’s Over-The-Air updates of the nRF91 to give an idea of how easy the “out of box” features of the IoT development platform are to use.

While there are hundreds of boards supported by Golioth in the hardware catalog, it might be a good idea to start with ESP32 or nRF9160 boards since most of the documentation focus on boards based on those chips. There are supposed to be three tiers for the free Dev Tier, a Pilot Tier, and an enterprise Ttier, but there’s no information nor price yet for the last two at this time.

The launch covers Golioth “Cloud edition”, but the company also plans to launch an “Open edition” to use the solution locally on your own servers instead of the cloud, and offers an “Extended edition” adding features such as single sign-on (SSO), virtual private cloud (VPC), and other customizations. Expect more changes over time as the project is fairly new, and only went out of beta a few months ago.

You may also find more details in the blog announcement from November 2021.