Tiny Core Linux is a lightweight (~22MB ISO) Linux distribution with an FLTK (Fast Light Toolkit)/FLWM (Fast Light Windows Manager) desktop and based on the Core Project that integrates a recent Linux kernel, vmlinuz, and a root filesystem with low footprint libraries such as busybox. It’s mostly interesting for older or low-end hardware that may be slow and/or unusable with more common Linux distributions like Ubuntu or Debian. 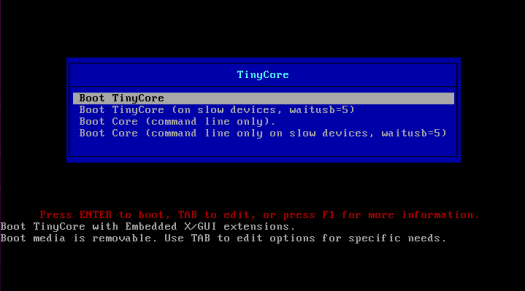 I’ve quickly tried the 32-bit ISO in VirtualBox and was offered to boot it with a GUI or command line, but an option for slow devices waiting for USB for a period of time. The desktop environment (shown in the first screenshot above) is very basic with just five icons are the bottom. The only application installed is the Terminal, but you can add more including Firefox through the menu. 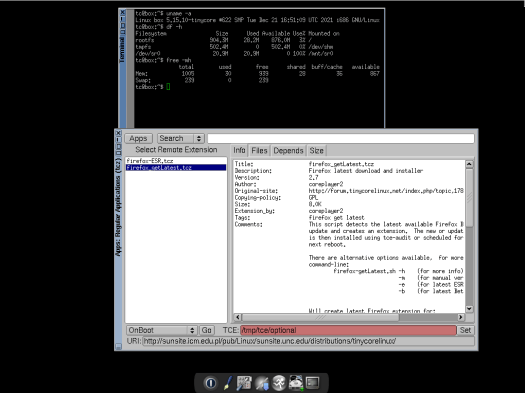 Right after the first boot, the system used around 30MB of RAM and 30MB of storage.

While the recent announcement is about Tiny Core Linux 13.0 for x86 systems specifically, there are also versions for the Raspberry Pi boards with PiCore v13.1 released last November 2021 compiled with either armv6, armv7, or Aarch64 flags. You’ll find the x86 and Arm images by browsing 13.x release directory.

More details may be found in the forum’s announcement.

Funny: that screens looks an orginal X screen, like on SUNs, in 1989 or so.

For those not already familiar with Tiny Core, for using it with IOT device, there is one very interesting characteristic : after boot everything run only on memory and unless specified explicitly reboot always unmodified. No risk of system corruption caused by power interruption. For an interesting example see projet Picore Player.

You have not mentioned the main feature for embedded developers, which is that TinyCoreLinux effectively solves the problem of power off caused file system corruptions on embedded devices like Pi. Just search for options available for Persistent Home directory.

A simple commit=600 addition in /etc/fstab reduces that risk already by at least 120 times (and dramatically reduces wear and tear on the SD card at the same time).

Maybe something to try on my alix board…

I was curious about the minimum hardware requirements but couldn’t find anything on the website, and the wiki is currently not reachable.

Trying the minimum configuration in qemu showed that it works with

It needs around 64MB of RAM to boot, anything under 59MB does not even get to a shell but after it boots, around 26MB is available. The 486 ISA PC is about as low as the kernel supports, only an FPU is required from the CPU.

Sounds good then for my alix

If you have an Alix you might also consider Alpine Linux (or a minimal Debian). I have a couple of Orange Pi Zeroes at home (ARM Cortex A7, 256 MB RAM) that I equipped with a custom kernel loading an Alpine image from SD Card. This complete OS image is loaded to RAM (initramfs) and contains all packages for operating as WLAN access point with some additional features (like wireguard for providing a secure connection to my server) and because it runs from RAM there is no wear and tear on the SD card (it’s not mounted after booting, just… Read more »

Hmmmm sounds weird to mee without a persistent overlay…

I know that surely somewhere is using a 486 PC because there’s always someone for that, but is something like a 486 being used today?

I know that this Distro want to be Tiny but do they gain something by targetting a 486 CPU?

Should that be ISO?