They’ve already taken out our audio jacks, and many laptops don’t come with an Ethernet port, but the Craob X portless laptop goes even further by completely removing all ports, and relies on a magnetic wireless charger that sticks to the laptop lid, and offers some USB and audio ports, you know just in case you actually need to connect wired peripherals…

The main advantage is that you’d get an ultra-thin 7mm thick laptop that only weighs around 860 grams. As long as you mostly rely on wireless keyboards, mice, headphones, or storage devices that may be a working solution, and if you need to charge the battery simply place the wireless charger on the back of the display. 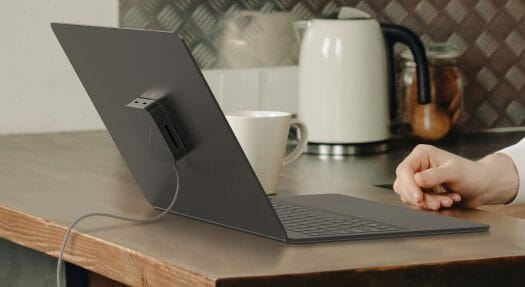 The wireless charger & dock also provides USB Type-C and Type-A ports, a Thunderbolt port, an SD card slot, and a headphone jack. We are not told how the wireless charger/dock transfers data to the laptop, but one has to assume WiFI 6E. I’m unable to see any antennas in the exploded view below. A neat little trick is that the top cover can be raised to roll the power cord and save space in your bag. 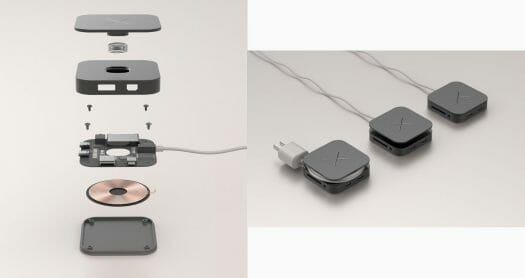 It will probably ship with Windows 11, and it will be tricky or even impossible to change the OS, but creating a separate partition to install Linux might work, provided no proprietary driver is needed for the wireless dock. Don’t ask me what happens if the laptop won’t boot anymore, and Windows 11 needs to be reinstalled.

If you’ve never heard about Craob before it’s because that’s their very first laptop, and it only appears to be at a concept stage at this time. So it’s still not clear if and when it will happen, or if there will be demand for this type of hardware since it’s would make more sense to have the ports directly in the laptop instead of a dock that ends up taking more space.

You’ll find more photos and a few more details on the company’s website.

Via Liliputing and MyLaptopGuide

And more importantly that LG thingy has a height of 17mm which makes the difference between an existing and usable laptop and some rendering + Photoshop job as above.

With a total height of 7mm where will the battery go? Below keyboard/trackpad that will most probably suck anyway?

> With a total height of 7mm where will the battery go?

Someone probably has to pedal to feed the wireless charger 🙂

Given that even the thinnest phones and tablets are barely under 7 mm, once you add a keyboard and two extra layers of casing I really don’t see how they are going to achieve that, unless they’re talking about the thickness of the bottom part only (and even then…). And I’m not sure a Core i7 will live very comfortably in such a crowded space.

Not to mention the uncomfort of the keyboard… all that just to show off to coworkers and say “my laptop is thinner than yours”, to which the other one responds “yes but mine doesn’t come with a suitcase of accessories to be usable”.

Really hope this thing is waterproof/dust proof too given that it’s sealed up.

The only sane reason to make anything portless, indeed.

This will be the laptop I use in the pool, guaranteed.

Good marketing, sell you a laptop, now sell you the outlet ports as extras. Guess they will sell the required battery as a extra next 🤔

That’s a tablet with an attached keyboard. Thinking of it as a PC will only confuse things.

> Don’t ask me what happens if the laptop won’t boot anymore, and Windows 11 needs to be reinstalled.

Most likely your friends or coworkers are having fun next to you, drinking beers and eating popcorn saying “we’re all with you” while you’re sweating thinking about your data and the future of your expensive and flat paperweight.

Very interesting, but I wouldn’t buy it.

The concept is fine, but why wireless charging? There’s no reason a set of pogo pins couldn’t be added to one edge so the device could have a proper dock.
The Microsoft surface Pro line has had it for years, I just wish they would have opened up the surface dock connector for anyone to use, it blows away USBC, and could have been a standard on anything from laptops to tablets and phones.

Plus it wouldn’t look ridiculous being stuck to the back of the screen.

The wireless charger is of a size that can provide 10-15W, for a laptop with a 28W CPU? Riiiight. Those silly corners of that display will make seeing / hitting crucial UI elements rather difficult. There’s also no way they can fit batteries, a keyboard, the hardware AND cooling that’s good enough for a 28W CPU in a case that thin.

This is either a designer having some fun at best or a scam at worst.

Oh and a screen this thin is only possible with OLED. Speaking of which… just get a Samsung Galaxy Book Pro 13, which has a really nice port selection including USB-A and is still only 11,2 mm thin and weighs 870 gram. For a device with microSD, HDMI, LTE / 5G, has a good keyboard, Thunderbolt 4 and USB-C, … and actually exists. Btw., despite having a “much” thicker case, it still struggles with removing the heat of a lowly 15W TDP CPU. Something that isn’t thick enough to house the CPU sans cooler surely will do a great job… Read more »