But if you ever wanted to connect multiple PCIe cards to the CM4 IO board, Waveshare has got you covered with the PCIe-Packet-Switch-4P that provides four PCIe x1 slots through an ASMedia ASM1184e PCIe switch. 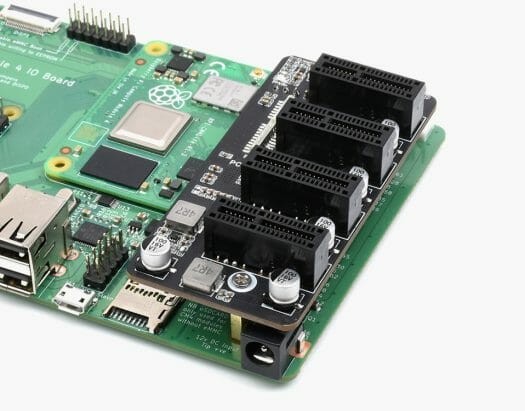 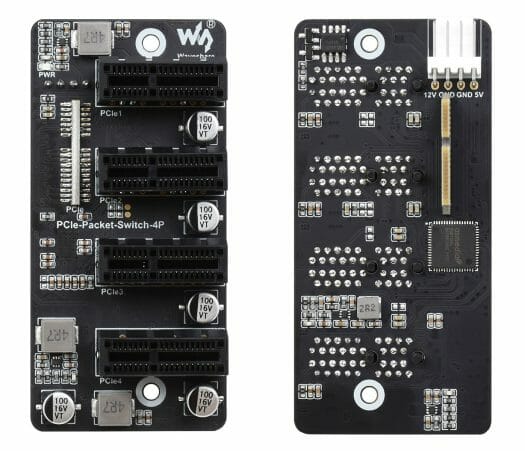 There are some interesting warnings in the Chinese wiki:

Note that Waveshare will typically provide English documentation, but it’s not available just yet.

PCIe-Packet-Switch-4P is sold in China for 144 RMB, or about $23. Again, I’d expect the board to show up on Waveshare English shop in the next few days or weeks.

So what are people plugging into these slots? Wireless card is an obvious one, and you could add some fake I/O USB ports this way.

Might as well hang USB off of the existing ports using a hub–you’re not going to magically get more bandwidth after all. Can’t put a GPU on them as the BAR is too small in the PCI-E controller of the Rpi (and many ARM SoCs, it’s not just an Rpi problem). So, yeah, networking cards are probably it. There’s enough bandwidth to plug in 4 single port GigE cards. The power limitations are a concern to me. They’re limiting the cards to 1.5A/slot at 3.3V. That’s half of the spec (3A @ 3.3V) and that’s not even accounting for the… Read more »

I mean there is persistent storage, but there’s really no point when you’re going to be multiplexing them over an x1 lane – no point as in you could get more bandwidth going over USB instead. I guess if you’re getting the drives really cheap… Jeff Geerling has tried out a few of this sort of product, and what he normally plugs into them are ML/AI (I don’t know the difference) accelerators. I see this as a pretty valid use-case: AFAIK they aren’t constantly maxing out the bandwidth, and the Pi is a pretty good ‘dumb’ controller to just send… Read more »

That’s a good use case! If we’re talking the little accelerators that you sometimes see on a USB stick, they’re in the 2.5W to 5W range, so they’d be okay on this board. If you’re thinking of something more beefy–a 1x card can negotiate up to 25W. The good news is any additional power is on the 12V line. That still leaves the 3.3V supply at half of the spec, so it’s possible that a car still wouldn’t function. And 100W over that floppy power connector is also a no-no. That little guy is only spec’ed for 3A–so 36W from… Read more »

Regarding “500 Mbps”, I’m pretty sure they confused lowercase “b” (bits) with uppercase “B” (bytes) and just wanted to refer to disk transfer rates that would be capped to ~500 MB/s.

That’s one possibility. I thought they just forgot a zero, 500 Mbps instead of 5000 Mbps.

You should remember that while marketing usually confuses letters and their case, they never forgets to add zeroes!

Has that CPU actually been clocked running 500MB/s over its PCIe interface? It may be a ‘well, the expander can handle 5Gbps, but what it’s connected to is bottlenecked, so…’ thing.

This is all good and I am glad we have so many options now with IO boards, but try finding a case/enclosure with4 PCI-E X1 low profile slots. I can not even find an enclosure with a single PCI-e card slot (vertically or horizontally). So if you want to start using these products in a commercial project, you have to get enclosures custom made which in the end makes the total solution expensive again. Does anybody know of off-the-shelf enclosures for the CM4 IO with a PCI-E x1 slot?