We were expecting Raspberry Pi Compute Module 4 sometimes next year, but Raspberry Pi Trading Limited managed to launch the new module much earlier, as Raspberry Pi CM4 and CM4Lite modules have just been launched with a new, much more compact form factor incompatible with the earlier Compute Modules, an I/O board making use of the new features, and a choice of 32 models with variations in terms of memory and storage capacity, as well as the presence or lack thereof of a WiFi and Bluetooth wireless module.

The Raspberry Pi Computer Module 4 also comes with an optional I/O board and an antenna (kit). 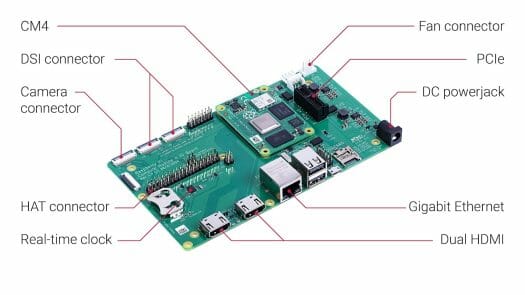 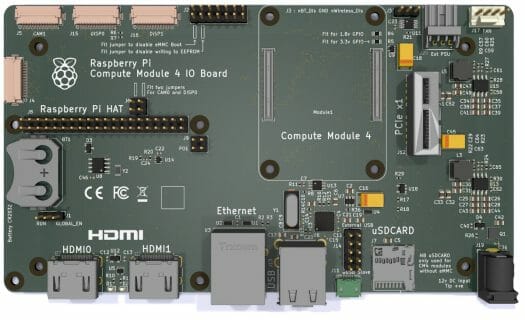 As mentioned in the introduction, there are plenty of variants for Raspberry Pi CM4/CM4Lite module with price ranging from $25 to $90 as shown in the table below.

RPTL standards for “Raspberry Pi Trading Limited” and I suppose it’s some kind of ordering code. We can see from the table some of the modules will only be available in bulk with a minimum order quantity, mostly RPI CM4 systems-on-module without wireless module. Raspberry Pi guarantees the availability of the CM4 until at least January 2028. The IO board will sell for $35, and the antenna for $5.

You’ll find the module for purchase on distributors like RS Components, Cytron, Element14, Seeed Studio, and many others.

How so? It’s not as if they manufacture these things only in the UK. They work with a lot of third parties that manufacture their RPi boards globally.

Wow, these are looking really good and really interesting. They finally have a product that can be used for proper commercial projects. Well done RPi foundation.

Modules like this work for up to maybe 1,000 units in volume. But then everything falls apart because you can’t access the SOC at 5K volume for a custom PCB. Instead Broadcom wants you at 100K or more in volume before you can switch over. Switching over is critical because it is going to lower your unit cost by about $20.

Sure and it doesn’t work for a project I had in mind, as there’s no crypto support, which is a huge bummer.

Don’t they all these have the same Broadcom BCM2711 SoC? I thought RAM, Flash Storage, Wi-Fi which differ is on seperate chips?

I’m sure Raspberry Pi Foundation will stop manufacturering models that do not sell as much to narrow down which models to keep long-term.

Just purely out of curiosity, is making your own baseboard for something like this a hobby level project? (some youtube tutorials on how to make custom PCBs and then just wire up the USB pins to a USB plug, HDMI to HDMI etc) Or is it a major undertaking?

No, not at all, especially not with high-speed interfaces like PCIe and HDMI.
It’s something you’d need professional PCB design software to do and a professional factory to manufacture. Keep in mind that you’d need a few extra components for both USB and HDMI over just the ports themselves.

If you have the stackup from the PCB manufacturer with kicad you can design the board without too many issues. (You just have to read a bit about hi speed tracks and impedence)

The PCIE 2.0 is not that strictly with impedence matching and length matching. (The market is full of shitty adapters). The only issue I’m thinking of is the two HDMIs and CSIs interfaces. Thoose have tight constraints.

Still not a weekend hobby project though, is it?

Yea for sure,
But a good DIYer can make the board for sure.

I’m not an EE, but I’ve designed a couple of boards with both usb3 and pcie. Not bad for a DIYer.

I’ve learned all by myself. My limit so far is a DDR3 fly by design 🙁

The SW and the factory are the least concerns. Most important is the skilled guy doing the layout and taking timing and impedance of the high-speed signals into consideration and also proper grounding etc. I’m an EE and did plenty of PCBs, but still HDMI and pcie some how put me off a bit, at least it has no DDR lines… I’m sure it’s also manageable on a hobby level, if you are ready to put some efforts into it. At least as long as you are not concerned about CE certification. But a simple board just with low speed… Read more »

USB2.0 might work even if you don’t get the traces right but everything else will need more effort than putting traces from point A to B in kicad and sending the files to jlcpcb.

Bummer. Would have been nice to have something even lazier than an Arduino. Plop into a baseboard, program with a full GUI desktop, then plop back into your application and off you go. I would have used something like that often when I used to work on digital art installations with a buddy. Instead we always had the awkward Laptop + ESPs over Wifi combo which was always a pain. I guess a plain old Raspberry Pi would work most of the time but you quickly get into a spaghetti of wires when you have a lot of lights and… Read more »

If you only need GPIO and USB2.0 that’ll run linux and python then you can get chips with a single a7 and memory that you can layout on 2 layers (if you don’t mind a bigger board). Like the SSC325 which is about $1.6 on taobao.

I mean that’s not quite the same b/c there is no standard baseboard to plug it in to have in effect a low power desktop computer like you do here – but yeah, you can sorta get most of the way there with some effort. Not exactly a weekend hobby project at that point though 🙂 And my motivation is mostly lazyness. Sometimes I wanna cut to the chase and flip lights and toggle relays from an IDE and normal desktop and not have to flash lil micros and debug C. But I also wanna be able to then transfer… Read more »

>a low power desktop computer like you do here – >but yeah, you can sorta get most of the way there with some effort. I think in most cases you probably don’t want the whole desktop really. With something running just enough linux and normal python you can develop normally on your desktop with something like pycharm and all of the normal stuff like unit testing etc, create a buildroot package for it and then dump it on you widget and it should run about the same as long as you don’t run out of memory. >EDIT: Oh man, I… Read more »

Or one of the SOMs by i.e. Olimex, those are much easier to handle.

That’s an option too. Depends on what you need.

What about diy a hat for the normal pi? High-speed is already there and lowspeed can be untangled on a simple pcb

It will be much easier if you use the Gumstix to design custom carrier boards, but it also add to the costs.

This hackaday article suggests it’s within reach for hardware-oriented hobbyists and recommends software to use for getting the impedance-controlled trace widths right. I’m more of a software person, so I’ll just see what boards come out for purchase…

You can also do reflow soldering with your toaster.

Not impossible, but nothing for mere mortals. And dont forget about CE or UL/FCC once you leave your lab desk.

I make them in the kitchen’s oven.

Advanced hobby for hobbiest electronical engineers, but sure, there are quite a few DIY hobbiest developing their own very advanced custom PCBs for personal use, just checkout the hackaday.com website and its community. Most poeple today do however not make the PCB board themselves at home but instead only make the design themselves then order just the boards in small batches from different services that make them. Checkout free or open source PCB software like KiCAD, or if you have money to spend you can buy professional software like Altium or Autodesk Eagle. Some people even sell smaller batches of… Read more »

Only 32 different SKUs? If they offered different color PCBs, they could easily get that number up to 128!

It is telling that they have enough unsold BCM2711 and enough enough idle production capacity to launch 32 different SKUs of the same thing.

I doubt it means what you think it means.

Would you base your companies product on a SoC every child learns to hack on, watch illegal movies and play stolen game roms on.

So never use intel CPUs 😉

Fair comment, but look at the how big a problem it is on PC. How many small to medium embedded arm manufacturers, have those funds.

Anyone know of any relativly inexpensive and low-power TensorFlow compatibe PCIe 1x cards that will work with this official Raspberry Pi Compute Module IO board?

If you can locate a RK1808 dev board that might be more what you want. RK1808 is ARM SOC plus 5TOPS NPU in single chip. Pine64 has some prototypes around, maybe they will give you one. Bare RK1808 is about $10.

5TOPs plenty for running edge neural net. Do the training on your desktop PC with something like RTX3080 which is 350TOPs.