The first Android 13 developer preview may have felt a bit underwhelming, but there’s a hidden gem with full virtualization possible on hardware such as the Google Pixel 6 smartphone.

What that means is that it is now possible to run virtually any operating system including Windows 11, Linux distributions such as Ubuntu or Arch Linux Arm on the Google Tensor-powered phone, and do so at near-native speed. 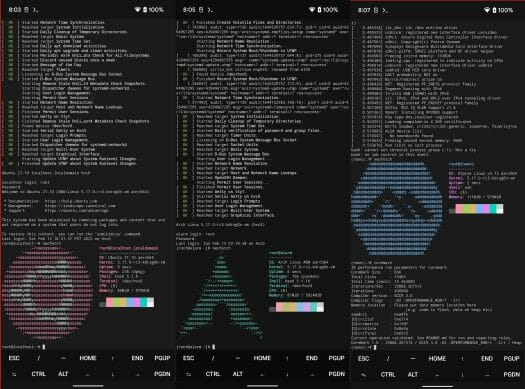 As far as I can tell, we can pretty much get full EL2 on production devices now. Protected KVM is optional and can be enabled on a per-VM basis, but for non-protected VMs, it looks like full KVM functionality is available.

EL2 refers to Arm Exception levels as explained on Arm developer website. kdrag0n did not stop here and managed to get Windows 11 running on the Pixel 6 as well through the same Android 13 virtualization.

The Windows phone is back! More seriously, we’ll have to see if everything is working as expected, but this does look promising.

But why did Google enable virtualization in Android? It’s unlikely they just wanted to let users install Linux or Windows on the phone. Mishaal Rahman addressed this issue about two months ago:

… This is because hypervisors may or may not be present on a device, and when they are, they’re often not even used for their intended purpose, which is to run an operating system in a virtual machine! Instead, they’re used for things like enhancing the security of the kernel (or at least trying to) and running miscellaneous code (such as third-party code for DRM, cryptography, and other closed-source binaries) outside of the Android OS.

So that’s mostly for security and binaries like DRM. Mishaal’s article also points to the Virtualization module source code and a guide explaining how to get started with Protected Virtual Machines.

Android now has feature parity with Chrome OS in providing a GNU/Linux environment.

This allows Samsung to relaunch their ill-fated Linux on DeX.

I wonder for how much longer Android will remain on bare metal when, if everything is in a container, Fuchsia beckons.

That’s awesome.
This will allow to run nodes natively in your pocket.
True decentralization.

Does not fit in hexameter either.

Wow, nice! So i can run Linux on Android tabs!

I am sorry but the windows screenshot is rd client /rdp/remote desktop client, connected to a windows computer or vm on another server

The Windows screenshot on the left is QEMU’s local VNC server, and the other screenshots are RDP. The VM is running on Pixel 6, not another computer or server.

You know the world is getting sick when you start to see hypervisors in phones… Piling tons of crap to try to address real problems instead of sitting down and wondering what is the problem we’re trying to address in the first place. Choice of software ? Quality ? Constantly having to choose between flexibility and security ? The next step will probably be like it was for desktops then servers, it will be to run outdated versions of Android as guests in a more recent Android…

Convenience > quality, and even security. Bring it on.

And wow, is that not the point.
No more obsolessed devices by software ANDROID. Ya, not getting to excited about running Windows. This is Linux news !

This will enable lazy devs to package an app as a docker service. All least all that ram won’t go to waste

I feel like I’m about to throw up… Another nice way to turn chemical battery energy into heat when doing nothing… Electricity and silicon are definitely too cheap. The day people can’t afford to charge their phone more than once a week, we might finally get rid of all that crap and the guilty developers who are wasting all these resources and find it normal to use 10MB of RAM and 100MB of storage to display a basic clock. Before this happens, no luck, and in 5 years we’ll see phones with 16 cores and 128 GB of RAM, to… Read more »

In all seriousness, OS/app bloat is not scaling to match the increased hardware specs. I think you would be hard pressed to fill 16-18 GB RAM because of how Android manages memory by default. Probably because there are many users who still only have 2-3 GB. The docked phone as a desktop concept should be pushed even harder. It was supposed to be a default feature in Android 10 but Google cut it. Using a phone as a desktop, you will be sipping power in comparison to traditional x86 systems, and it could cut down on e-waste if it encourages… Read more »

It may also be for regulators. If you can VM CPU and GPU, then Google can argue they aren’t blocking APIs or activities on their platform. Even if it’s out of reach of most users to pull off, they can say “it’s possible – just package it up and sideload.”

This is exciting. I will have good use of my galaxy tab s7. Android tablet will sell very well if this is true.