While Raspberry Pi Foundation provides a fixed price for their single board computers before taxes and shipping, the street price may be different, and I’ve seen several reports on Twitter of the Raspberry Pi 4 with 4GB RAM now selling for over $100 due to the lack of supplies. The problem seems especially pronounced in Europe with some users reporting a price close to 120 Euros, instead of the usual 50 to 60 price range. 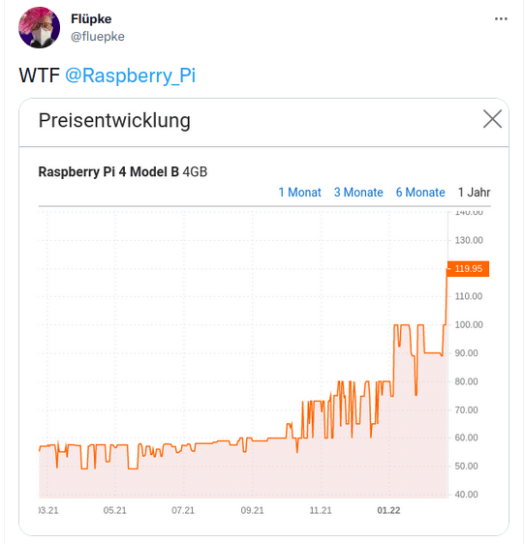 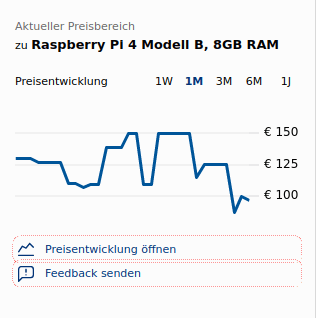 Geizhals price comparison website did even show the Raspberry Pi 4 with 8GB RAM selling for up to 149.99 Euros (About $170) just last week, but prices have now gone down to just around 100 Euros, clearly a steal!

The price for Raspberry Pi 4 with 4GB RAM has also gone down, but it is still at 89.90 Euros according to the Heise’s price comparison website.

This is probably a regional pricing issue, but the whole world is impacted by the lack of supply. Here in Thailand, I often read complaints about the availability of the Raspberry Pi board or lack thereof. Hopefully, this will not take another year to get resolved. The current picture on the rpilocator website is not pretty as most items are out of stock, and only three stores have stock of CM4 (2GB RAM, No MMC, No Wifi) or/and Raspberry Pi 4 with 1GB RAM.

It should be noted that Raspberry Pi boards are not the only low-cost single board computers, and you’ll find alternatives such as Hardkernel ODROID-C4, Orange Pi 4, Pine64 RockPro64, FriendlyELEC NanoPi M4V2, RockPi 4, Khadas VIM3, and others that are relatively well supported, although having a technical background might help with resolving issues.

The affordable computer is dead if they do not resolve this on the near months. Competitors are clearly taking advantage on this.

So competitors are delivering the affordable computer instead? No problem then.

RPi can hit back with more supply or a new model. Unless we are forecasting permanent chaos in the market (Taiwan takeover) instead of the oversupply situation expected to happen around 2023+.

“The affordable computer is dead” hahahahahah

Obviously, you’re a Pi detractor. I’m a fan of your YouTube channel and read some of the community updates.

RPT has money flooding into them and will probably release a Pi 5 by 2024 at the very latest. Maybe sooner if they keep it on 28nm? And you will hate it for being 4x Cortex-A75 with a crappy Broadcom GPU and the world will keep turning.

Did we get completely nuts? another 28nm board on 2023? moreover, A75? No company EVER made any a75 with that fab. What they are going to squeeze in there, a quad core a75 at 1,5Ghz again? they better include a heatsink with that horrible fab. So NO. They will use 16nm at the very least, being 8nm the recommended for a76+.

The world needs to stop flooding devices with ancient fabs. The 28nm era was cool, we will remember it with nostalgia, but it’s over, OVER.

Yes, I am a pi detractor. World will keep turning, but that doesn’t change the fact that rpis are completely overrated, specially as desktop.

They will be releasing a pi5 by the end of 2023 or 2024, probably a very compelling a75… but, that is to far from today. You are a rpi fan boy, and that’s sad bc then it turns you are not into this bc of the tech (arm linux as affordable pcs) but just bc you believe that rpi is the best of the best and upton is a pioneer, an elon musk of sbcs. Nonsense, they just released an sbc in the right moment at the right price and they went popular instead of others. It was a mix… Read more »

I am not an RPi fanboy. I am just responding to your comment, a strong statement which doesn’t make any sense: The affordable computer is dead if they do not resolve this on the near months. The “affordable computer” isn’t dead if someone other than RPi is providing it. If you mean that the RPi brand is dead or dying, that clearly isn’t the case. They are in high demand. If you mean that the RPi’s low MSRPs are dead, that remains to be seen. These high prices are temporary. If they abandon the $35 price point when launching Pi5,… Read more »

That’s exactly what I said, rpi makes affordable computers and they use that as slogan. their statement would be dead, not rpi.

Raspberry Pi twitter description : “we make inexpensive, small computers for home….”
That would die, do you understand now??

Everything on the lower end seems to be impacted. I’ve tried finding some Mainboards with integrated CPU around 10W, at the range of the Pentium J5040 and above, and there is almost nothing. I wonder if we’ve arrived in the post abundant world already.

Built a 5700G system for around $700 (not small form factor). It’s absurdly powerful compared to what I had before and all most people would need for a long time. Decent Chromebooks and laptops are still available in the $100 to $400 range. Considering inflation (over time, not just recent) and what computers used to cost (for much less perf), we are hardly in the “post-abundant world”.

The embedded/niche segments got hit harder, but barring further catastrophes, the low-end market will recover. Maybe it will take until 2023-2024.

It’s time to start thinking about how much you value the graphics. Since Raphael desktop CPUs are expected to have up to 4 CUs of RDNA2 graphics, you will have another option that will have more PCIe lanes and faster cores. And more cores than 8 if you want to pay for that. You could grab a 6-core 5600X successor instead of a 5700G successor. For efficiency, you can limit the clock speeds to approximate a 65W TDP.

Welp, now I have to go watch Adam West Batman. There goes my free time.

I saw the price first, skimmed over the name, and thought you meant Pi4 4GB. Then I looked again.

The pi zero boards have always been unobtanium. I haven’t seen one in person since they came out.

At some point it just makes more sense to buy x86 unless you have specific needs of the Pi. Also, yeah, competition seems able to make boards.

All part of the global price gouging, disguised as inflation.

But there does come a point here the public refuse to pay such prices and so corporation profits become at risk, meaning a reduction but not a reduction to the normal levels.

In the UK, energy prices are about to rise by an average of 54%, so riots in the streets will take peoples minds off buying a Pi lol

This is nothing. Visit eBay and you can see scalpers selling the 8GB for $250+.

Kits with accessories can reach $500+. You gotta love capitalism aficionados.

Shopping on Bing shows a few stores still “selling” it for < $100 but when you visit the site, it’s all “out of stock”. Right.

So Pi 4 finally got COVID too 🙂

Well, at least you can count on the Pi being worth a lot – unlike the USD with all this inflation right now…

“lack of supply” are you sure? Just check helium (HNT) miners. All models including a Raspberry Pi 4.

Ship to some EU countries €6

Yeah, the prices go up to “why don’t you just buy a nice laptop?” range. MFW.

You ain’t seen nuthin’ yet. Wait ’till Panda Bear moves in on Taiwan. Talk about chip shortages – pffft!

Who is Panda Bear? You are obviously talking about Winnie the Pooh!

Yeah, Pooh Bear – my bad. Or maybe my mistake is why my post wasn’t auto-deleted?