But now the company has announced the launch of the Alder Lake P-Series (28W) and U-Series (9W and 15 PBP) 12th generation mobile processors designed for “thin-and-light” laptops which should become available around March 2022. 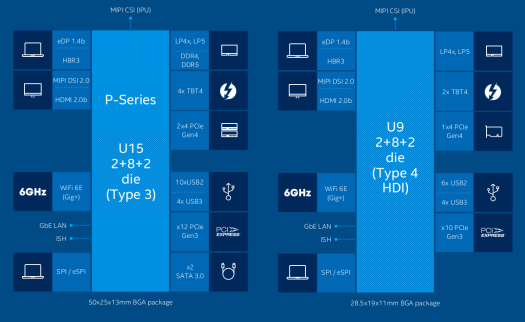 The 15W SKUs are basically the same but with higher based and max turbo frequencies for both the Performance and Efficiency cores. The nomenclature is similar with Pentium 8500 (9W) becoming Pentium 8505 (15W), and i7-1260U becoming i7-1265U. The Max Turbo Power goes up to 55W.  The 15W should offer higher performance, but the biggest difference against the 9W part could be the selection of interfaces.

Intel provides some performance metrics and comparisons in the slides for the media and analyst presentation with claims up to 70% improved multi-threaded performance for the P-Series (Core i7-1280P), 17% faster web browsing, and 30% faster photo editing when compared to the Intel Core i7-1195G7 Tiger Lake processor. CrossMark benchmark shows a 20% improvement.

Intel added processors from Apple and AMD to the chart above for good measure, but note that they should be more efficient. For instance, AMD Ryzen 7 5800U has a default TDP of 15W (configurable between 10 and 25W). Other highlights include Intel Wi-Fi 6E (Gig+), Thunderbolt 4, and the Imaging Processing Unit 6 (IPU 6.0) to deliver higher quality photos/video conferencing. Intel also notes the new processors support up to four 4K displays, a 12-bit video pipeline, as well as up to 8K30 10-bit HEVC/VP9 encode.

More details may be found in the announcement. We may have more Alder Lake announcements, as Intel did not talk about the expected Alder Lake-M/M5 family with a 5/7W BPB designed for tablets.

Way too many SKUs.

There must be a mistake in the table. No turbo frequency for the Celeron, but the MTP is still shown.

Notebookcheck is rolling with the same information in their writeup:

I’m not sure it’s a mistake. Maybe Intel has its own reasons (even legal) for using the same max turbo power for the whole lineup.

If the “M5” tablet chips materialize, I guess they would have to clock even lower.

Notebookcheck is most probably getting their info from Intel’s website.

How long until these actually turn up in a machine you can buy.
Not sure if it’s the same everywhere but everything laptop shaped from Lenovo, Dell etc here has a few weeks or months of wait time.