In simpler times, Raspberry Pi was making Arm Linux SBC’s, and Arduino MCU boards, but after Raspberry Pi got into the MCU business last year, it’s now time for Arduino to introduce its first Arm Linux board with the Arduino Portenta X8.

The new board since comes with the same STM32H7 Cortex-M7/M4 microcontroller found in the Portenta H7 boards, but add a more powerful, Linux-capable NXP i.MX 8M Mini processor with four Cortex-A53 cores and a Cortex-M4 core, coupled with 2GB RAM and a 16GB eMMC flash. 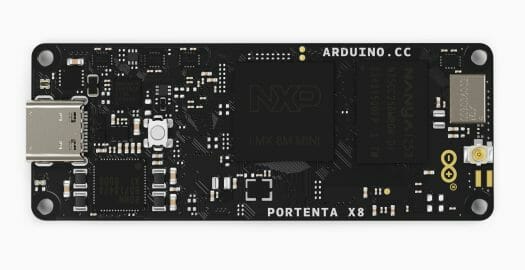 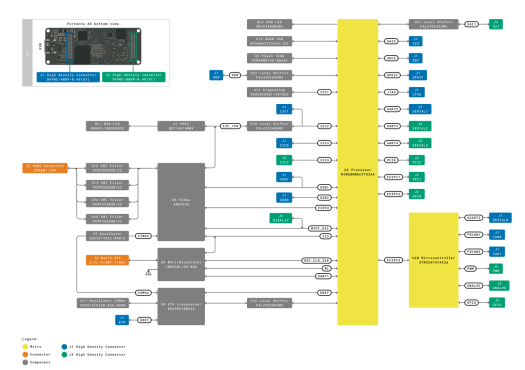 Since Arduino does not have the expertise to provide a secure Linux system for enterprise customers, the company collaborated with Foundries.io who help develop embedded Linux IoT and Edge solutions for the Arduino Pro Portenta X8, notably making sure the board is Arm SystemReady IR compliant, and providing a customizable Linux microPlatform OS with support for security and incremental Over The Air (OTA) updates.

The NXP processor runs a Yocto-based Linux distribution (4x Cortex-A53) and FreeRTOS? (Cortex-M4), while the STM32H7 microcontroller is still programmable with the Arduino IDE or Arduino Cloud. The new board keeps the high-speed connectors but loses the Arduino MKR headers found in Portenta boards. More technical details may be found on the documentation page.

As noted in the comments below, this is not the first Arduino board running Linux, as MIPS-based Arduino Yun and Arduino Yun Rev 2 were launched in 2013 and 2018 respectively. The Portenta X8 is however the first Arm Linux board from Arduino and is much more powerful than boards from the Arduino Yun family.

Just like other Portenta boards, the Portenta X8 is part of the Arduino Pro family for industrial and enterprise use, and the board will be selling for 199 Euros or $239 US once it becomes available in mid-April.

I don’t think it’s the first Arduino Linux board. They also have the Arduino Yun which ran Linux on an Atheros processor. This board sure is a lot more capable though!

Wasn’t that MIPS though? So this would be the first Arm based one.

I was going to add the Edison based board whatever that one was called (seems even Intel is trying to forget that product line).

Yes, correct. I completely forgot about those. I’ve added something about it, and corrected the title.

199 Euro?! Wow. I wonder about the target market, which cannot be handled by Raspi.

Yeah.. imx8 and sym32h7 on the same board? Seems redundant and unnecessarily expensive. Also, I have no idea about target market. Feels like they are throwing everything they can at the wall to see what sticks. Can’t imagine this one will

It’s probably for customers for which the cost of hardware is negligible and they need something that works in industrial temperature range, with security certifications, and a company that handles software support.

Arduino used to be only for hobbyists, but they appear to focus their efforts on higher value customers with recent announcements related to Arduino Pro and Arduino Education.

This board has zero chance of success at $239 USD.

I could not agree more.

Well, it is approved by both CE and FCC, so it’s actually quite cheap. Developing a system like this from scratch could cost about $100k and 3-6 months If you need like <50 installations, each would cost like 2k. And then you don't have OTA.. just like Jean-Luc said, it's not for hobbyists
200 USD sounds like a lot, but it depends.

Makes me wonder if the next-generation Raspberry Pi will also include an onboard RP2040 MCU?

Kinda doubt that, a real time core in the SoC would make more sense, as the number of GPIO’s is somewhat limited on RPi, and some applications do really need all of them going to the SoC, like for example the CaribouLite SDR that uses Pi’s peripheral memory interface to stream the data to the Pi. If an RP2040 would occupy those pins, many such applications would no longer be possible, and I don’t see them adding more pins to the board.

Finally a serious ARM product for Industrial prototyping and not a cheap board designed for School students that is a nightmare to setup in a critical environment.
This is just fantastic

Actually, this isn’t the first Arduino ARM-based board capable of running Linux.
There was the Arduino Tre, which not only took well over a year to ship after it was formally announced (like most Arduino products of that decade), it silently never shipped at all.

Like others, it’s not clear how this is going to do against something like the RPi CM4 which is probably going to do 100x the volume at 1/4 the price.

Thank you, another expensive board you can replace with a 20 USD one for the maker community…