I like to browse Linux changelog to learning about new features in the kernel, but also new hardware that made it into mainline Linux, even if only preliminary or partial.

And in the just-released Linux 5.13, one board that caught my eye was Art-Pi, powered by an STMicro STM32H750 Cortex-M7 microcontroller without MMU (memory management unit) that was initially designed for RT-Thread real-time operating system. 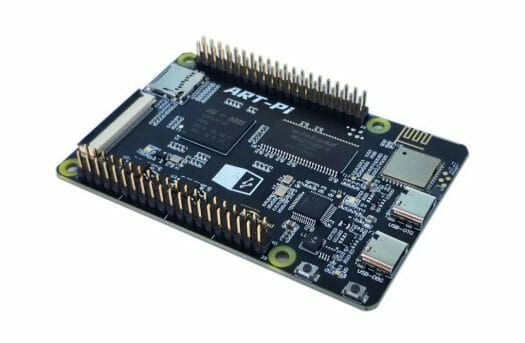 Most of the documentation for the board is in Chinese on gitee.io. RT-Thread real-time operating system source code & SDK, and some documentation in English are available on Github and Gitee. There’s also a getting started guide that has been translated into English.

Art-Pi is also one of the rare platforms added to the Linux kernel without MMU. But if you’ve never used a platform without a memory management unit, be prepared for some “fun” with random crashes/kernel panics due to stack overflows.

Art-Pi board can be purchased on Aliexpress for $65 including shipping. You’ll also find a “multimedia expansion board” with a display and an industrial board adding an Ethernet RJ45 port, as well as CAN Bus, RS232, and RS485 terminal blocks. Both expansion boards can also be combined as shown in the photo below. 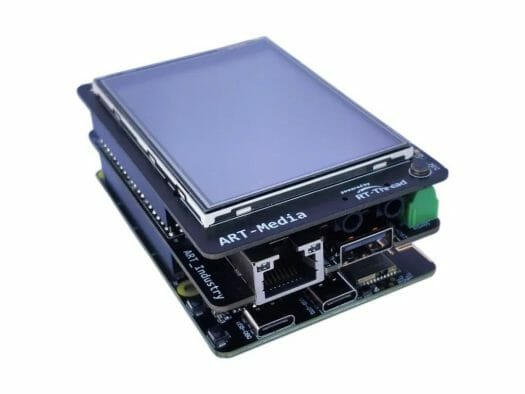 Does anyone have a use case for a cortex M7 with linux? It just seems to me that those SoCs with a single A7 and some onboard memory would be better if anyone needs a tiny linux machine

Yeah, my thoughts exactly. Furthermore, I’m not entirely sure why this f7 SKU even exists – m7 without mmu is a really weird MCU to begin with..

The Cortex-M7 is faster and more efficient than a Cortex-A7, so it’s an obvious choice when running an RTOS that does not use an MMU.

This particular board just packs in all features one might use with RT-Thread, so you can prototype a system on it and then design a cheaper board that leaves out all unneeded parts, and uses the cheapest stm32 sku that can still run the software.

The only non-obvious question is why one would run Linux on it, and I believe the answer is just “because it can”.