The Raspberry Pi Compute Module 4S is not launched yet, but we discovered it will be used on Revolution Pi S and SE series DIN-rail industrial computers via a tweet from Jeff Geerling and his post on Raspberry Pi forums. 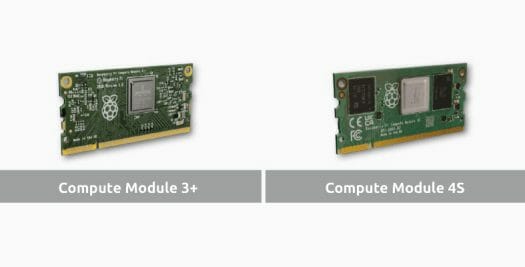 Memory bandwidth might be a little better with the LPDDR4 memory too (TBC), but all the rest looks the same. The main advantage of the new Raspberry Pi CM4S module is compatibility with older SO-DIMM carrier board, and possibly better availability once it’s launched since older 40nm Broadcom processors like the BCM2837 are in short supply. Few people will use it for new designs as memory capacity appears to be limited to 1GB, and you’ll lose the PCIe interface, Gigabit Ethernet, plus support for optional WiFi and Bluetooth found in the Raspberry Pi CM4 module.

As you know, the Revolution Pi family was not spared from the global chip shortage. In the last months we had to put many customers and people interested in RevPis off. This was mainly due to the supply of compute modules, which could not be delivered sufficiently.

The following modules will be available as S/SE series: RevPi Core, RevPi Connect and RevPi Flat.

Customers upgrading from the CM3+ module will have to upgrade to a newer Linux 5.10 kernel.

The company says the first units of their S and SE series fitted with the RPi CM4S module will be shipped at the end of April as an alternative to their original orders. New orders should only become available in July 2022. Compute Modules 3 or 3+ based products will remain in their portfolio, and should start shipping again once the Raspberry Pi shortage issues are resolved.

…as well as RGMII (‘native Gigabit Ethernet’) which results then in ‘up to 340 Mbit/s’ for an USB2 attached GbE controller (the ‘350MB/s’ above are clearly wrong).

> Customers upgrading from the CM3+ module will have to upgrade to a newer Linux 5.10 kernel.

More importantly they need an OS image with an updated primary OS and that’s ThreadX (euphemistically called ‘Firmware’ by RPi folks). Only updating the kernel won’t do the job.

This really sucks as many redesigned their appliances to move to new form factor without knowing there will be another module family coming basically compatible with cm3+. E.g. Turring Pi 2 etc.

Why is the Pi4 easier to produce than the Pi3? I know Pi4 uses more modern fab process, but it also uses more components or more expensive components right?

Is the old process being used for something else and eating RPi foundation capacities?

Old nodes are still in hot demand for products that don’t need anywhere near a leading edge node.

> Is the old process being used for something else

You can also fit more chips on a 28nm process wafer than the older 40nm, so there’s less demand currently plus you get more chips per die, a win-win for the BCM2711.

This is a very good idea.

So, wait, can I buy one of these, toss it into one of those handheld consoles designed for the CM3, pop a CM4 compatible RetroPie on it, and off to the races?

Sure! You can buy a ‘Revolution Pi S/SE’, pull the CM4S out, throw the RevPi thing away and then waste your precious spare time with retro gaming the way you outlined.

Hint: nobody knows yet whether the CM4S will be sold separately or to whom and at which price.

I don’t see why you need to both be snarky and not answer my question. There’s literally no universe where these things don’t ever hit any secondary market ever. Your mouse has a scroll wheel, I encourage you to learn it’s functionality, the next time you feel like you want to be mean for no reason. HAND!