Smart Bee Designs’ Bee Motion is an ESP32-S2 board with a PIR motion sensor, some GPIOs for expansion, and promising over a year of battery life under the right circumstances.

If the name “Bee Motion” rings a bell, it’s because we covered the Bee Motion Mini board last month with an ESP32-C3 processor and a PIR sensor, but no USB port for programming and no expansion ability. It was just designed to be used as a battery-powered wireless PIR motion sensor. The Bee Motion expands the use cases of the solution, although it only features WiFi connectivity, and loses Bluetooth LE. 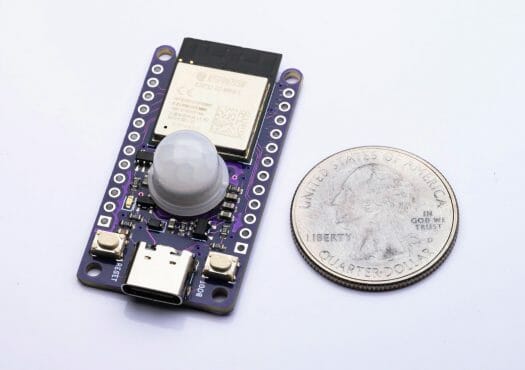 The Bee Motion ships with headers and a JST connector for a LiPo battery that users could solder to the board if needed. Resources can be found on Github with a 3D printed case, JPG schematics and PCB layout, and a simple Arduino Sketch to put the board in deep sleep mode, wake it up upon motion detection, and toggle a GPIO before getting back to deep sleep.

Smart Bee Designs also used a Power Profiler Kit to measure the power consumption with a similar sketch that also connects to WiFi (as I understand it), and assuming a 100-second active time per day, the board would last well over a year (441 days) with a 1,500 mAh battery.

The core is wrong. Don’t know which spec sheet you copied from but the S2 is an Extensa not a RISC-V

“Colour me surprised, the S2 has both an Extensa core and a RISC-V core.

The “ULP” RISC-V core operates at around 1% the power of the Extensa core. They don’t say what frequency it operates at , but in the power consumption docs they mention an 8MHz internal clock that is disabled when the ULP core is offline, so it makes sense that the RISC-V core is operating at 8MHz or possibly 16MHz. They quote approx “22 µA @1% duty” while monitoring a sensor, up to “190 µA powered on”.