After completing a DIY Raspberry Pi Zero 2 W handheld PC earlier this year, Penk Chen has designed another, rather odd but cool-looking, DIY computer. The “Mainboard Terminal” is a retro-style computer with a round display powered by the mainboard found in Framework modular laptop.

The computer has been tested to work with Ubuntu 22.04 out of the box with just a few configuration tweaks for the display, but other operating systems should also work considering the mainboard is based on an Intel Core  i5-1135G7, i7-1165G7, or i7-1185G7 Tiger Lake processor. 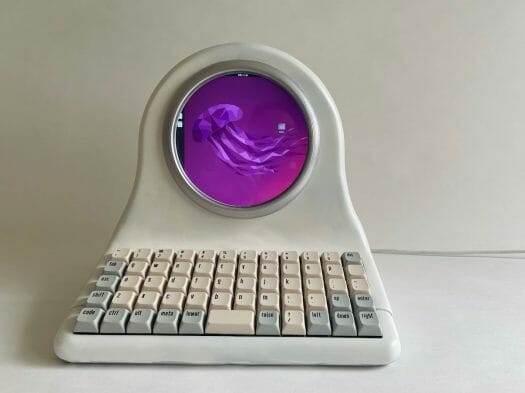 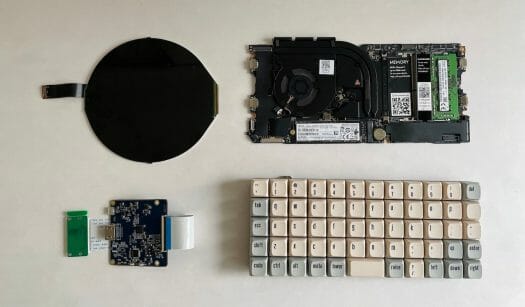 So most of the work consisted in designing the enclosure, and Penk released the STL design files on Github under an MIT license for the Mainboard Terminal.

Since the display has an unusual 1080×1080 resolution, it has to be configured with xrand:

He also installed cool-retro-term terminal emulator which mimics the old cathode display, and modified the screen curvature for aesthetic reasons by changing the following line in app/qml/ApplicationSettings.qml:

All 3D printed parts are held together by 5x2mm magnets, but Penk suggests some people may want to tweak the design to add holes for screws, and/or cutouts for USB 4.0 ports. A computer with a round display will have limited use cases, but you have to admit it looks pretty neat.

That is retro-gorgeous, love it.

What’s the appeal of a circular screen.

At least it had the merit of making me discover cool-retro-term, which I’m pretty sure I’ll eventually use in the meeting room with the video projector to see the faces decompose around the table 🙂

cool-retro-term is just tons of fun. I use it with translucent backgrounds, and a bit of CRT curvature in the corners, and I love the jitter feature. The horizontal sync feature isn’t adjustable enough to get to the ranges that I recall.

Yes, the various noise and jitter stuff looks pretty real. Also when you use a bright background, you see the same defects we used to know on older CRT screens, with foreground colors being washed and almost unreadable. And using it in full-screen on a laptop quickly makes you forget it’s emulated, It’s really well done.

Ah thanks for the tip! It will look and sound like I’m at home then 🙂

Needs a punch card reader and a couple of electric vaccum valves.