Most laptops are not made to be serviced by the end-users or expanded. In the part of the world where I live, I still have a “warranty void” sticker if I open my laptop to add an M.2 SSD. There are very few laptops with full documentation and whose companies encourage users to update and modify the hardware.

Olimex TERES-I and MNT Reform 2 open-source hardware laptops do offer modularity, customization, and repairability, but they are based on low-power Arm processors and cater to a rather niche market. However, a new company called Framework is preparing to launch a modular laptop that is easily upgradeable and repairable with a more powerful set of features. 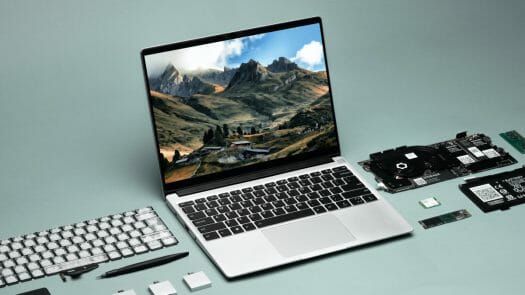 The Framework laptop is offered with a choice of 11th generation Intel Tiger Lake Core processor, up to 64GB RAM, up to 4TB SSD storage, a 13.5-inch display, a Full HD webcam, a 55Wh battery, and weight less than 1.3kg with a thickness of 15.85 mm.

Each laptop will also come with four bays compatible with the Framework Expansion Card system lets you select the ports via exchangeable USB-C modules offering USB-C, USB-A, HDMI, DisplayPort, MicroSD, “ultra-fast storage”, and more with a thicker USB to Gigabit Ethernet module also is the works.

You’ll also be able to replace the usual storage, memory, and WiFi module, as well as the entire mainboard to upgrade to a faster processor, the battery, screen, and keyboard. Laptops are not usually relying on socketed processors, so the complete motherboard must be changed. Each part will have a QR code that takes you to the relevant documentation on the company’s website. Framework will also release specifications and reference designs for the Expansion Card system under a permissive license to let the community design and sell their own expansion cards.

The Framework Laptop is offered with pre-configured models running Windows 10 Home or Pro, but the company also designed the Framework Laptop DIY Edition sold as a kit to let people customize and assemble the laptop themself and install Windows or a Linux distribution. All models will come with a screwdriver for assembly, upgrades, and/or repairs. 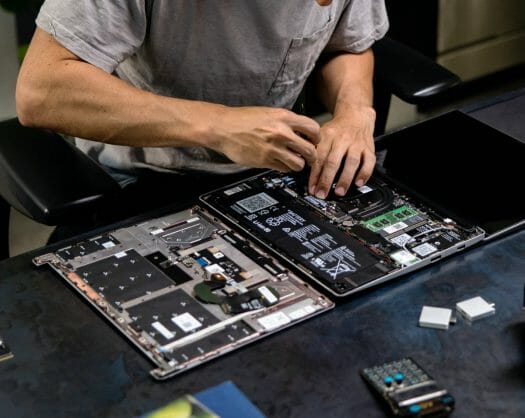 Current options available for pre-order include:

As expected the price of the modular laptop is a bit on the high side, but flexibility comes at a cost. Shipping is scheduled for this summer, and right now buyers just need to leave a $100 refundable deposit first. You can pre-order on Frame.work website.

Great, a modular laptop that you can tailor yourself. If only I could remove that huge touchpad to place a much small one with 3 real buttons!

Great concept but as always, it depends on cost and execution.

“it should be quite pricier than standard models that benefit from high volume production and aren’t serviceable by most users.”

The real deal would be in making this affordable to cater to (and hence capture) a larger market. Hope they price it right.

Nice idea, but all of these modular devices seem to fail before they get to release any upgrades modules etc,the only way modular stuff could work is if big vendors get behind it.

You can upgrade Latitudes and Elite books, but only battery, memory and storage really make sense. The chassis and display tend to be fine after six years, so it is a shame to replace them. On the other hand you get a functional laptop for the kids so the overall life is about 10 years.

Ruggerized tablets usually use pogo-pins for additional components to be screwed to them – like various scanners or additional I/O. Hard screwed makes it rigid and reliable.

Those I/O USB/Video “boxes” they slide to the side of the laptop don’t scream “rigid” and IMHO there is limited value in such sudo-customization of USB connectors and display output. There is more value in customizing insides like storage. cellular connectivity etc.

Nifty idea to be supported !
More integration into the SoC. A laptop consist of 4 or 5 parts:
Mainboard – Battery – Input (Keyboard + Touchpad) – Display – Shell/Case.