Iglia has done more work on the graphics driver for the VideoCore VI GPU found in Raspberry Pi 4 and other Broadcom BCM2711-based hardware with Vulkan 1.2 conformance, and Roman Stratiienko added Vulkan 3D graphics acceleration to Android, or more exactly LineageOS.

Raspberry Pi and Iglia have been collaborating together since the launch of the Raspberry Pi 4 SBC to develop a Khronos conformant Mesa 3D graphics driver for the board, and that’s a long-term project that’s been going on for over two years, and not quite finished yet. Here’s a non-exhaustive timeline of the project so far:

Graphics drivers take a lot of time to work on, and it’s the same for the Panfrost open-source driver for Mali GPUs that we first covered in 2019, although a bit different since the project gets updated as new Mali GPU architectures get released as well.

Igalia’s Iago Toral says all the changes required for Vulkan 1.2 core functionality for the Raspberry Pi 4 have been merged to the upstream V3DV Mesa driver and will eventually be available in future Raspberry Pi OS updates, and work has started for other extensions, some Vulkan 1.3. So it will take some time before Vulkan 1.2 support is available in Raspberry Pi OS as Mesa 22.2 must be released first, and then picked up by the Debian package repository. But if you compile upstream Mesa driver yourself, you should be able to check out games or demos like the “The Deferred Shadows” sample from Sasha Willems. 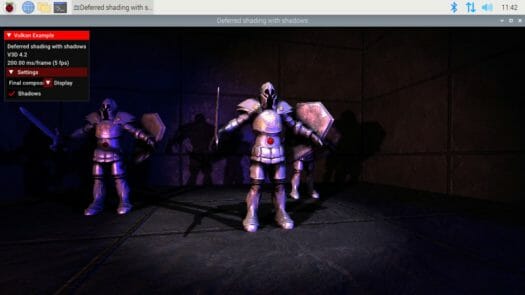 Separately, Roman Stratiienko added OpenGL and Vulkan support to the Android 11-based LineageOS 18.1 for Raspberry Pi 4, and other similar hardware such as the Raspberry Pi 400, and Compute Module 4 with at least 2GB RAM. Eben Upton says “The best examples of “real world” applications for Vulkan on Raspberry Pi today are games running on Android/Lineage”, and that includes games such as Real Racing.

While Android support on Raspberry Pi 4 has gone a long way and most features are working, LineageOS is still for advanced users and still missing video hardware decoding and encoding (software decoding/encoding is OK), and the stock camera app does not work (third-party ones seem OK). Security may not be optimal either as SELinux is in permissive mode.

You can buy a RK3399 board cheaper and faster ! Oddly the RPI 400 is easy to find in-stock, guess it does not sell well.

I dunno way raspberry try and sell the 3d side of VC6 as really its just a video DSP than dedicated GPU and its performance shows this as in the above pic that manages 5FPS!

It has an open source GPU. Many pirate clones don’t even have functional GPU drivers. So..

Not open source, not open, unable to source. At this point every Mali GPU has better support.

I learned both OpenGL and Vulkan on the RPi4. It’s been great to see the steady progress from Iglia. I’d love to see the Vulkan video extensions supported some day.

Got to love these names. Vulkan? Khronos? Somebody has been watching way too much Star Trek.