Pine64 Star64 is an upcoming single board computer (SBC) powered by StarFive JH7110 quad-core 64-bit RISC-V processor equipped with an Imagination BXE-4-32 GPU, and in a form factor similar to the earlier Pine64 model A boards such as the Quartz64 Model A.

The Star64 SBC will be offered with either 4GB or 8GB of RAM, an HDMI 2.0 video output connector, two Gigabit Ethernet ports, a WiFi 6 and Bluetooth 5.2 module, USB 3.0 ports, a PCIe slot, and a GPIO header for expansion. 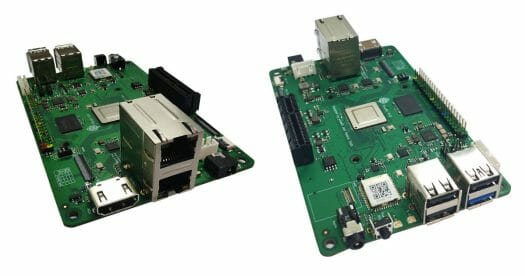 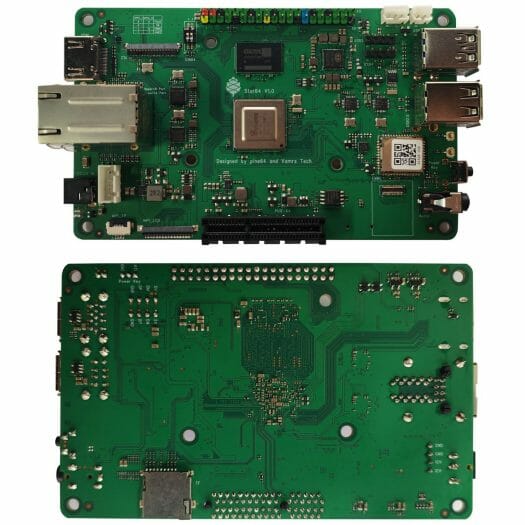 One potential use case for the PCIe x4 slot highlighted by the Pine64 team is the use of a PCIe to SATA adapter to create a NAS with multiple drives. Software for the StarFive JH7110 SoC is still a work in progress, but both Debian and Fedora are already being ported to the RISC-V processor, which should not be surprising as those are the same operating systems expected to initially run on StarFive’s own VisionFive 2 SBC.

Both Star64 and VisionFive 2 SBCs offer many of the same features, but the Pine64 board provides access to the PCIe interface via a PCIe x4 slot instead of an M.2 socket and is equipped with a wireless module for WiFi and Bluetooth that the VisionFive 2 board completely does without.

No pricing has been announced yet, but Pine64 Star64 is expected to become available in a few weeks to developers only, which makes sense since there’s probably a lot more work to do to be a usable platform. A few more details may be found, and questions asked, in Pine64’s official announcement.

Apparently, some firmwares aside, the GPU drivers are open source and are in the process of being upstreamed while the user land stack is the normal Mesa so the opengl and vulkan bits will be shared with Intel and AMD: https://developer.imaginationtech.com/open-source-gpu-driver/

It’s unclear whether the BXE-4-32 GPU is supported by the open-source GPU driver.

Seems pretty clear to me: https://forum.rvspace.org/t/img-bxe4-32-gpu-open-source-plan/600

If you had shared that forum post initially, it would have been clear from the beginning 🙂

I didn’t know about it myself. I originally found the drivers by googling for imgtec open source graphics drivers. When you said you weren’t sure about the coverage, I googled “https://developer.imaginationtech.com/open-source-gpu-driver” thinking some distro including the drivers might mention the hardware supported in their release notes which led to a facebook post “https://www.facebook.com/groups/riscv.tw/posts/1611033709104137/” and a link to their forum.

Is it going to have hardware accelerated video decoding working out of the box, too? That’d place it miles ahead of half of the usual ARM SoCs.

They don’t mention anything about the video decoder but I believe vulkan has an extension for h.256 decoding nowadays so they might end up exposing it there instead of doing separate video drivers…

I’d honestly rather have a 12v barrel plug that screw around with type c for no good reason.

For a NAS, a full PCIe x4 is a lot better than an m.2 socket. I’m actually considering buying this as a dedicated Nas/Kodi machine, instead of an itx-based NAS and a cheap Android TV box

It doesn’t really matter as it’s only Gen2 x1. On Star64 the 2nd PCIe lane is USB3 (pinmuxed) while on the VisionFive 2 this PCIe lane is occupied by a VL805 USB3 host controller like on RPi 4.

If you’re fine with 5 SATA ports there exist M.2 JMS585 boards for VisionFive 2. With Star64 you get one SATA port more by choosing an ASM1166 card. Always severly bottlenecked of course (Gen3 x2 vs. Gen2 x1).

The board layout and DC-IN tries to be compatible to former larger Pine64 boards which might help their developer community.

BTW: if you’re not a developer wanting to help upstreaming RISC-V this is not for you anyway. As for the VisionFive 2 comparison: the eMMC socket is the same (just a second row of pins for more sturdiness), USB-C with USB PD for power is actually a disadvantage in ‘board bring up’ stage and real PCIe is also better for developing/testing PCIe compatibility.

The compact version (model B) should come soon after.
I never liked this board format…

Why don’t they make one board that can be both used standalone and in the pinebook(pro) shell?

You’d develop on the laptop and then “deploy” on bare boards and you’d have one consistent cohesive ecosystem instead of a bunch of similar but slightly different boards..

This boards seems to have basically all the parts you need in a laptop (connectors for display, camera, audio, SD, battery?). Just needs a tweaked form factor.

Have you found a battery connector on this board (or the VisionFive 2)? Me not.

Since both boards use X-Power PMICs I would assume they’re both more or less StarFive’s reference design which might rely on a PMIC not capable of charging.

I guess this here is ‘board / platform bring up’ and not consumer’s paradise.

Need not worry ”  In this laptop solution developed and designed by StarFive and its partners, the laptop is powered by batteries, expands necessary communication peripherals through PCIe and USB, and supports a front camera and 2K LCD touch screen. These shape a set of competitive entry-level notebook computers solution. “

It seems logical that they’ll eventually make a pinebook compatible board as well.. I just don’t get why make extra SKUs (granted this is a dev board and maybe won’t be put into production). It dilutes the brand and you seemingly only save a tiny bit on a charging circuit here.

Every board needs extra documentation, OS images etc etc and confuses consumers. The one thing the RPi guys did right is keep the number or boards they release to a minimum so they all have good comprehensive support

Don’t forget this either

Pin64 model B boards such as the Quartz64 Model A.

Are you sure about that? BU would be an USB3 part while the sticker on the module suggests it’s SDIO 3.0 instead.

I’m not sure, I just relied on the information from Pine64’s announcement.
As a side note, the VisionFive 2 has two USB 3.0 Type-A ports, while the Star64 only has one, so the second USB 3.0 might have been used for the wireless module.

The exact JH7110 specs are in flux, as there are some discrepancies between documents. We don’t how many native USB 3.0/2.0 interfaces there are exactly.

I got confirmation that:

Thanks for asking. So it’s USB Hi-Speed most probably behind an internal hub.

And on the board pictures a VL805 chip next to them can be seen. That’s the PCIe attached USB3 host controller also used on RPi 4 to provide there 2 x USB3-A and 2 x USB2-A.

On the Star64 pictures two Terminus USB2 hubs can be seen.

I’ve managed to get some pricing information for Star64.
Star64 single Ethernet version will match the Raspberry Pi 4 price, while the double Ethernet stack version is $5 more.

I need a board similar to this with arm cpu with two m.2 SSDs. Can anyone recommend one?