Last month we covered Banana Pi BPI-F2S single board computer (SBC) for industrial, IoT, and smart audio application that was powered by the intriguing SunPlus SP7021 “Plus1” processor featuring four Cortex-A7 cores, one ARM9 ARM9 real-time core, and one 8051 I/O controller core, as well as up to 512MB built-in DDR3 RAM.

At the time, the board was not available, and we had limited information about software support, except the company would provide a Yocto-based Linux distribution. The good news is that you can now buy Banana Pi BPI-F2S industrial SBC on Aliexpress for $58 and Taobao for 390 RMB, and the company released source code and OS images for the board. 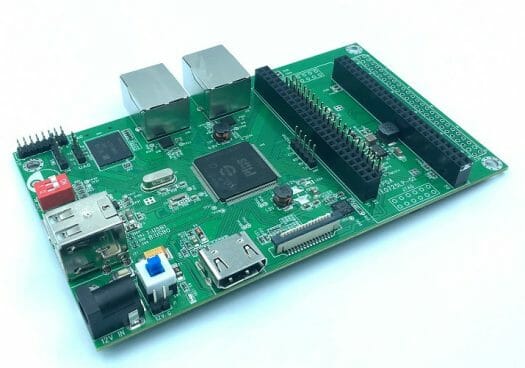 While the board has been launched, we still don’t know for sure whether it comes with 128MB or 512MB RAM, so specs are incomplete, and we cannot be 100% sure it’s really industrial-grade since the company did not clarify.

Software-wise, the company released Linux 4.19.37 on Github, as well as Debian 10 Buster and Fedora 31 Mate firmware, and links to various other resources on the Wiki.

The video below shows a short GPIO demo in Debian 10.

There’s also an “SOC education and training practice suite” featuring the SBC, a Xilinx Artix-7 FPGA board, and a “teaching sheet board” with 4-digit LCD,  DIP8 socket for SPI flash, and 8x LED’s but it’s not for sale at least not on Aliexpress.

Finally, we can do Embedded Linux board hand-soldering with a QFP chip package and integrated ram up to 512MB!

There are actually quite a few chips that can run Linux in QFN and QFP. Recently there are some with AI hardware built in too. The problem is getting hold of them is not simple as you need a middleman in China to actually buy them.

we can not buy Xilinx Artix-7 FPGA board , it not instock , so maybe we need to design a FPGA board by ourself . so the kit not ready now .

Oops my bad… I’ve updated the Linux version.
Noted about the education kit.

What makes it ‘industrial’?

It’ll be expensive and hard to aquire.

I suppose it’s the temperature range, not knowing BPI Tech I’m afraid the components on the board may not all be industrial temperature grade.